In September 1917, the 7th was sent to Camp Wadsworth, in Spartanburg, South Carolina, for basic training. While there the 7th Infantry was changed to the 107th Infantry and was made part of the 27th Division. Training included trench warfare work with French and British officers, drills for gas warfare, Chauchat machine gun instructions, drills under live artillery fire, and lots of bayonet training.

In December, Eugene returned to New York on furlough. On December 14, 1917, Eugene married Winifred Young, a secretary in the linen/garment industry (in which Eugene formerly worked). More than likely, Eugene met Winifred at work and there is evidence that Winifred was close friends with Eugene’s sister, Mary. Furloughs were for 7 days, so Eugene and Winifred only had a few days together.

At the end of April 1918, the 107th Regiment was sent by train from Camp Wadsworth to Camp Stuart in Newport News, Virginia. On May 8, the 107th embarked on two ships, the USS Susquehanna and the USS Antigones (two German ships that were seized by the U.S. and converted to troop transports). Company H arrived in Brest Harbor, France, on May 25. After a multi-day train ride in boxcars, featuring an unexpected German aerial attack, arrived in Noyelles, France. During June and July there was a lot of marching, some experience with German aerial attacks, and German artillery shelling.

On August 10, Company H and the rest of its battalion joined an English battalion in relieving troops in the trenches outside Abele, Belgium. After a few days, the 107th found itself holding the line just below Mont Kemmel. The Germans attempted a counterattack and Company H only experienced heavy shelling, with few casualties. They were relieved on the 18th and resumed a training regimen after marching several miles from the front.

On September 24, the 107th was transferred to a position opposite the famed Hindenburg Line as a reserve unit to the British. Three times the British unsuccessfully attempted to breach the Hindenburg Line and ultimately took 80% casualties. Then it was the 107th’s turn. For the attack on September 29, the 107th was assigned to the northern part of the front. Their objective was a tunnel which the Germans used to connect dozens of machine gun nests.

Company H was in the third wave of the attack on the extreme left flank of the American line. At 4:00am, after a very difficult overnight march to get into position, Company H and the rest of the 107th moved up to the starting line. At 5:50 am the attack began.

By the end of the afternoon, all the officers of 2nd Battalion, of which Company H was part, were casualties. 2nd Battalion incurred over 50% casualties during the battle. September 29 turned out to be the deadliest day of the War for the Americans.

Here is the official commendation written about Eugene’s death:

Eugene is buried at the Somme American Cemetery in Bony, France. For several years afterward Winifred was a roommate with Eugene’s sister, Mary Josephine Masterson. Winifred must have really loved Eugene as she never remarried and in 1930 she traveled to France to visit Eugene’s grave. Winifred died in 1972 as Mrs. Eugene Masterson.

In 1919, after the War, President Wilson asked artist E.H. Blashfield to design something for the families of soldiers who had been wounded or had died in the War. Keep in mind that this was before the Purple Heart, which wasn’t authorized until 1932 (though it was retroactive to 1917). Blashfield designed a poster that was given to the families of these soldiers. Through the generosity of Winifred’s family, the poster given to her for Eugene has been given to me. The caption at the bottom reads as follows: 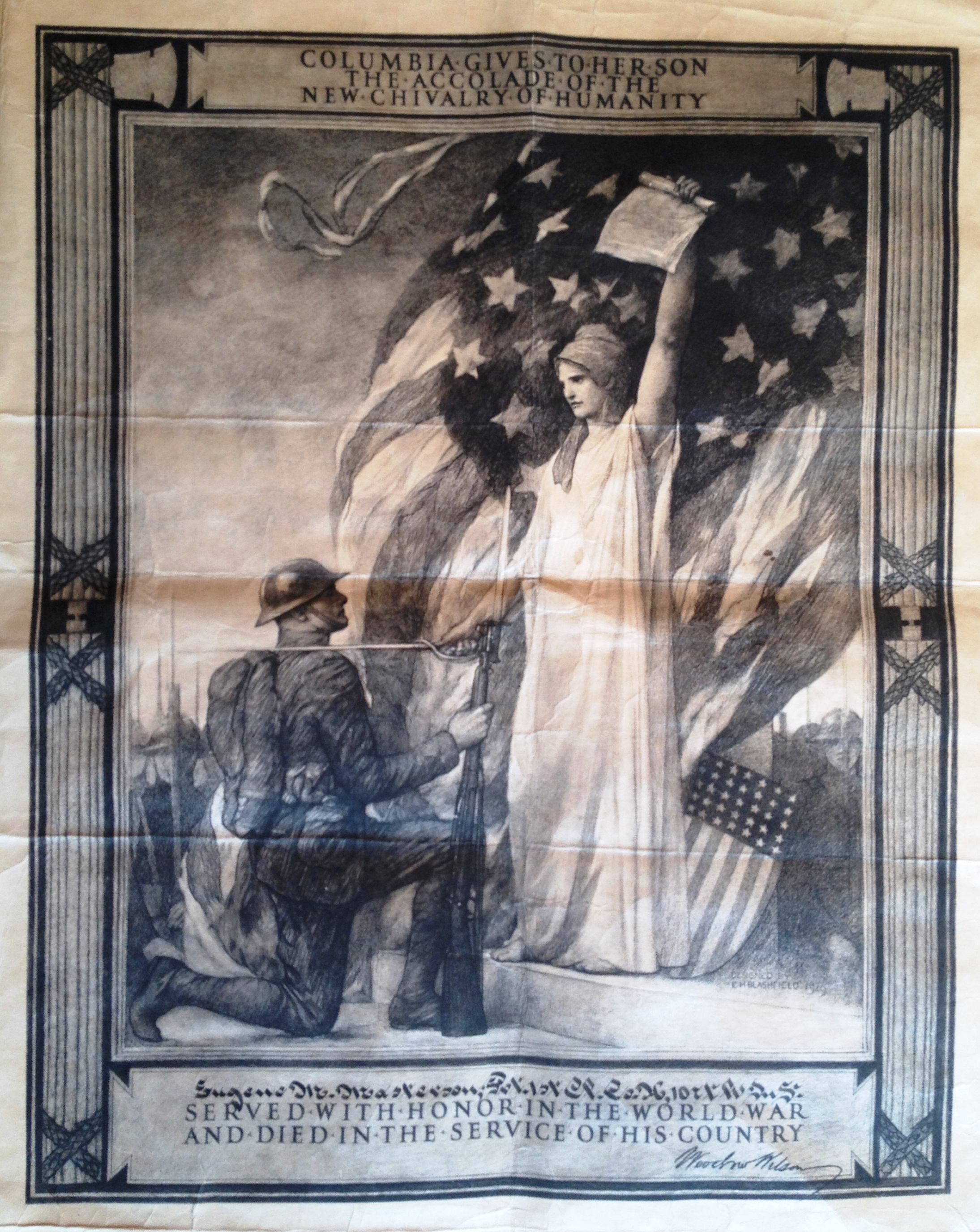