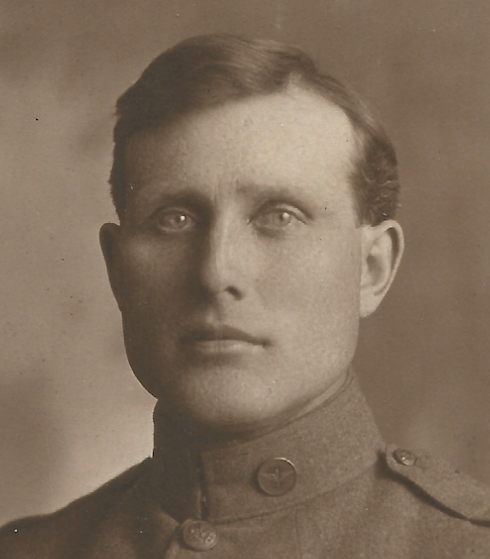 Frank Clyde Mercer was born around 1887. Frank Mercer served in World War 1 with the United States Army Air Corps. The enlistment was in 1918 and the service was completed in 1918.

The service of Franklin “Clyde” Mercer in the First World War began in support of the war effort as a 30-year-old, civilian, munitions worker for the Whitaker Glessner Company, a steel production company contracted to manufacture 155mm howitzer shells at its location in New Boston, a small Ohio village within the city of Portsmouth, Ohio. Frank’s military draft paperwork show that he was employed with Whitaker Glessner on June 5, 1917, the date of his registration for the draft.

Eleven months later, on May 17, 1918, Frank would enter military service. He was accompanied by his uncle, Harzy Walls, 6 months his junior, who was also entering the service. Now 31 years of age, Frank departed the Ohio River Valley for Camp Sevier, a military training camp located in the upstate of South Carolina, near the city of Greenville.

It was here, following their formal induction and training into the Air Service of the National Army, that Harzy and Frank would part ways. Frank was assigned to the 15th Aero Construction Company as a carpenter and would spend the early summer months getting technical training at Camp Mills and Hazelhurst Field, near Garden City, New York while Harzy would train near Norfolk, Virginia at Camp Morrison with the 27th Balloon Company for the remainder of the war.

On August 8, 1918 Frank boarded the RMS Empress of Russia in Hoboken, New Jersey along with the rest of the 15th Aero Constr. Co.; this marks the beginning of his tour as a part of the American Expeditionary Forces (AEF).

Following its arrival at port in Liverpool, England, the 15th Aero Constr. Co. was transported to its wartime place of service in the West Sussex region along the English Channel, to a town called Rustington. Here, on 159 acres of land near the shore, the US Air Service was tasked to construct one of several airfields as dictated by the Handley Page Agreement between the United States of America and Great Britain. This agreement arranged for the US to participate in the production of the British Handley-Page O/400 twin engine bomber. Aircraft parts and supplies were to be fabricated in the US and then shipped across the Atlantic for assembly at American-made Aerodromes in England. It’s from these aerodromes that bomber crews would train and depart for the conflict across the channel.

The aerodrome hangars at Rustington were 75ft. wide and 408ft. long, designed for the assembly and maintenance of the massive Handley-Page aircraft; a railroad made the crating and transporting of the aircraft sections possible to each assembly area. While in Rustington, Frank was approved for both a permanent pass (dated October 30, 1918) and a special pass (dated November 2, 1918) that granted him permission to be away from his station under certain conditions. These passes both indicate that the headquarters of the 15th Aero Constr. Co. was located at: Field No. 3, Chichester Area, Rustington, Sussex, England.

The Aerodrome at Rustington was still nearing completion when the Armistice was signed on November 11, 1918; following the cessation of hostilities, the US Air Service personnel were quickly recalled from the Handley-Page project and the airfield and several of its buildings were left abandoned by November 15, 1918. Seven days later (November 22) the 15th Aero Constr. Co. boarded the SS Minnekahda in Liverpool, England for its return voyage home.

On December 4, 1918 Frank’s venture with the AEF came to an end with his arrival back in New York. From there Frank was transported to Camp Sherman in Chillicothe, Ohio where he was honorably discharged from military service on December 22, 1918 and entitled for transportation to Portsmouth, back near his native Sedan, Ohio.