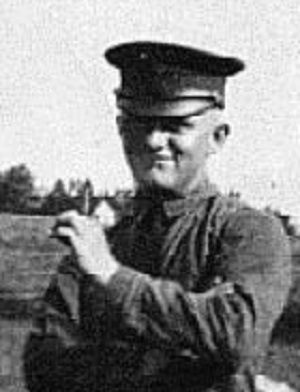 Clarence Marine Johnson born around 1897. Clarence Johnson served in World War 1 with the United States Army. The enlistment was in 1916 and the service was completed in 1919.

The National Guard was created by the National Defense Act which went into effect June 1, 1916 and on June 19, 1916 was called to the Mexican border for duty by President Wilson. This was in response to the revolutionist Poncho Villa crossing the border to attack a village at Columbus, New Mexico. It is interesting to note that at this time in history the U. S. had only about 137,000 regular army and 181,000 National Guardsmen in uniform in the entire United States. General Pershing used the regular army near the border to follow Poncho Villa into Mexico. The National Guard was called up to position themselves all along the border to discourage any more infringements 0n U. S. territory.