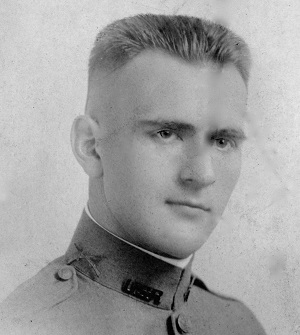 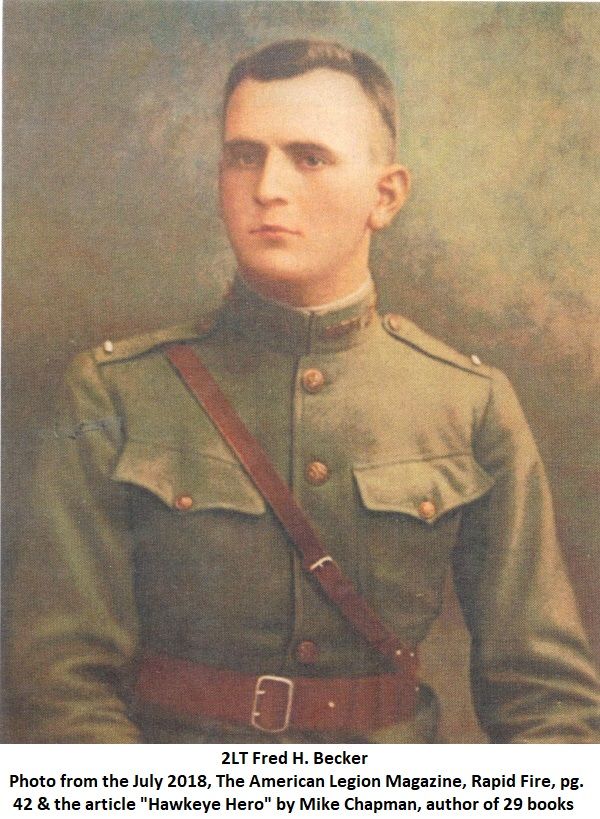 After winning acclaim as the finest football player in East High’s short history, Becker moved on to the University of Iowa, and quickly made an impact, on and off the football field. His combative spirit was mentioned prominently: “He is on the high road to football fame,” wrote a reporter for one newspaper. “With only 166 pounds to back him up, he has made the team in his sophomore year thru (sic) sheer fight and ability.”

Though the Iowa team finished just 4-3 for the 1916 season, Becker was selected as a lineman for the All-Western Conference (forerunner to the Big Ten) team. An article in a newspaper summed it up this way: “The honors came to the Waterloo boy because of his fighting qualities, which have manifested themselves from the time Becker first began playing the gridiron sport.”

He was also awarded a spot on the All-American first team selected by Walter Eckersall, the foremost football authority of the time.

“No matter where he was placed, his work was a feature,” Eckersall wrote. “He was strong and powerful and quick to size up the attack of his opponents. He seldom failed to open holes for the backs and was on top of the play all year.”

When Eckersall added that Becker was “unparalleled in Iowa football annals,” he still had two more seasons ahead of him. No previous Hawkeye player had achieved such stardom on the national scene, and at such a young age. He was also a very popular figure around campus.

The future for Iowa football and Fred Becker looked extremely bright. But while much of America was reveling in the exploits of its college football heroes, an extremely grave situation was developing in Europe. Like most college students across the land, Becker certainly was aware of the tensions that were engulfing the globe during the late fall and winter. And when war was officially declared by the United States, Becker answered the call. Fueled by that fighting spirit that so many had seen in years previous, he left school and enlisted on March 16, 1917.

Becker undertook infantry training at Fort Snelling, and was commissioned a second lieutenant on August 15. He came back to Waterloo for a brief visit, and then departed on August 27. After a long sea journey and additional officers training in France, he arrived on the front line.

A story in the Waterloo paper told of the impact he made on those around him: “During his course of training at Fort Snelling and since his transfer to active duty in France, he has won the praise of the officers with whom he was associated. He was absolutely fearless on the football field and carried this same spirit into his duties on the battlefield.”

The main war zone in Europe was called the Western Front, a 475-mile long battleground between France and Germany. Trench warfare was a primary form of fighting that characterized the early stages of the war. The invention of weapons like the machine gun and flamethrowers made the crossing of open ground extremely dangerous, and trenches became the best means of protection. Barbed wire was also used as a means of deterring mass troop movements.

The terrible ordeal of soldiers was portrayed vividly in the monumental novel, All Quiet on the Western Front, later made into an award-winning film. The hero of the book, a German soldier, was overwhelmed by life at the front:

“The summer of 1918 is the most bloody and the most terrible … never was so much silently suffered in the moment when we depart again for the front line … never was life in the line more bitter and more full of horror than in the hours of the bombardment, when the blanched faces lie in the dirt.”

That was the world that Fred Becker and thousands of other young Americans found themselves thrust into.

On June 3, 1918, Becker was struck in the left shoulder by a piece of high explosive shell. Days later, Becker wrote to his parents in Waterloo, telling them about the war and the wound. He said his company had been under heavy fire for over two hours at the time he was injured, and added that he was anxious to return to battle.

“Everyone wants to get into action and all feel slighted when they are not engaged in combat when there is important work to be done,” he wrote.

The last major offensive launched by the Germans on the Western Front was the Battle of Reims. It took place at the Marne River, near Paris. It began on July 15, 1918, and lasted until August 5. During that period, Allied losses were stunning: It was estimated that 120,000 men were killed, including 95,000 from France, 13,000 from Britain and 12,000 Americans!

After three days of ferocious fighting, the Allies stopped the Germans. Eight large American Divisions, under General John J. “Black Jack” Pershing, teamed up with 24 French divisions for a furious counter-attack. Becker was with the 5th Regiment of the United States Marine Corps.

With his platoon pinned down by a German machine gun nest, Becker moved forward and took out the nest. The exact details are lost in the mists of time, but according to information sent from service officials, his action was crucial in “preventing the death or injury of many men in his command.”

The Marine Corps report continued: “….his self-sacrificing courage permitted his platoon to advance, but as he completed the performance of this noble work, he himself was killed.”

Less than two years after earning All-American honors on the football fields of the Midwest, Fred Becker paid the ultimate price for his country on July 18, nearly four thousand miles from home. The engagement in which Becker fell is called the Battle of Chateau-Thierry, named after a city 56 miles northeast of Paris.

Details of Becker’s death came from a fellow officer, Lt. John D. Clark, who sent a letter to Fred’s parents. He told them that Lt. Becker was found on the battlefield in advance of his comrades, “indicting that he was leading them in the fight.” He had been hit in the throat and Clark added that he probably died instantaneously. 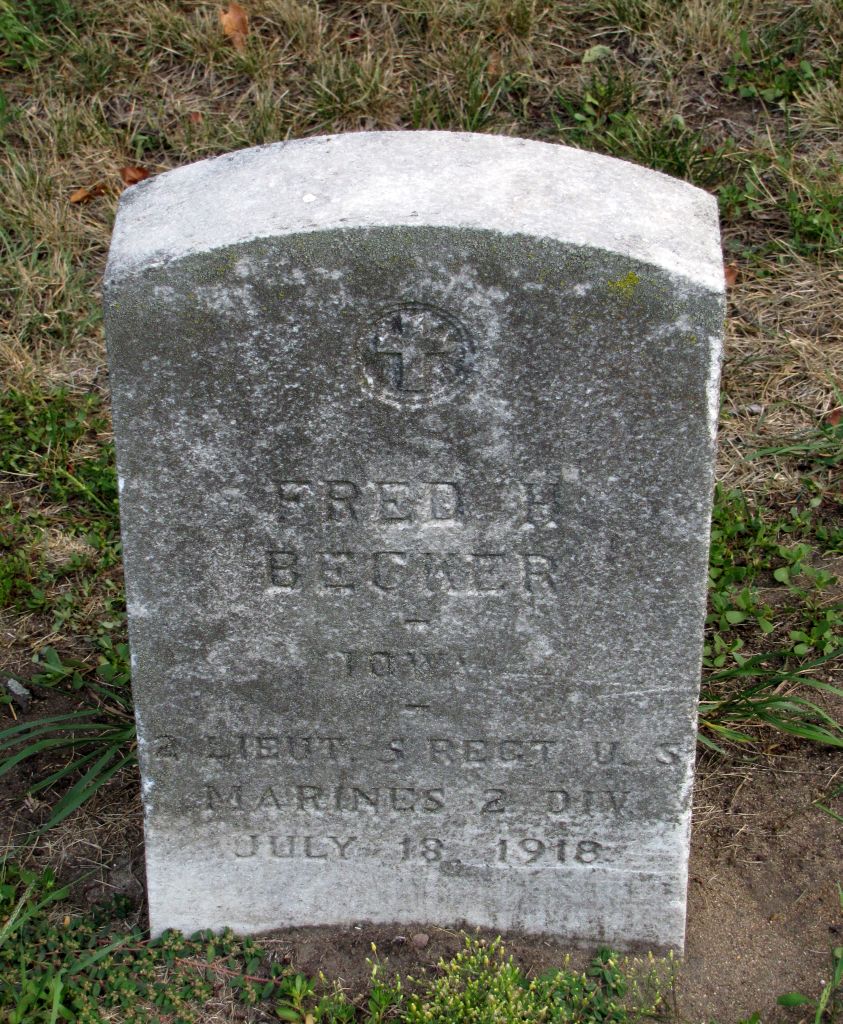 Fred Becker was buried where he fell, but his body did not remain in France. The War Department was determined to bring home as many soldiers as possible, and on May 7, 1921, the body of the former Hawkeye hero arrived in Hoboken, New Jersey. It was transported by train to Waterloo, where it arrived on May 13.

A large crowd of family and friends were at the station to see the flag-draped casket removed, and taken to the funeral home. An honor guard was posted around the clock, until the day of the funeral. The event was front page news in the Waterloo Evening Courier, under a headline, “Thousands join in last tribute to Lt. Becker.”

The story read: “While 5,000 persons stood with bowed heads, the mortal remains of Lt. Fred H. Becker were consigned to their last resting place in the soldiers plot in Fairview Cemetery yesterday afternoon.” Following brief speeches and the volleys of shots over the grave, taps were played.

“Thus was taken the last step in the transplanting of the remains of the American boy, brave and true, who made the supreme sacrifice for his country, from the poppy fields of France to a sunny slope in beautiful Fairview, there to rest under the lilies and the roses.

“Never before in the history of Waterloo has there been such an outpouring of people to a funeral. Grace Methodist Episcopal Church, one of the largest in the city, was filled to capacity nearly an hour before the time set for the services to begin. Two thousand persons crowded into the edifice and as many more were unable to obtain entrance. The steps, the churchyard and the adjoining sidewalks were packed.”

Reverend Henry Muelller was the main speaker at the cemetery. He told the vast crowd that “to leave home and loved ones, to give up for the time being the pursuance of a cherished ambition – a medical course in a university – to separate from friends and assume the duties of a soldier, these are the things that mean more than bravery; they bespeak the very highest form of patriotism.”

It was said Becker had planned on becoming a surgeon. One high school teacher had compared his dedication to that of the famous Mayo brothers in Rochester, Minnesota.
Becker was awarded the American Distinguished Service Cross, and also received the Belgian War Cross and the Croix de Guerre, the top award France can bestow for battlefield heroism.

Soon after his death, there was talk of naming the University of Iowa football field after him, but it never came to pass. On March 30, 1921, the American Legion Post 138 was dedicated in his honor and for Lt. Carl Chapman, another Waterloo football star who had become one of the first American aviators to die during the war.

Like many World War I soldiers, Becker was soon forgotten.... until 2009 when he burst back into the public spotlight after being discovered by a longtime journalist. Within a short amount of time, Fred’s story was published in a state-wide publication (he was even on the cover) and the article was reprinted in an Iowa football game program. In addition, he became a topic of discussion on radio talk shows all across the state.

After decades of being overlooked, he was inducted into the University of Iowa Athletic Hall of Fame at halftime of a 2010 football game in front of 70,000 Hawkeye fans, with his photo put up on the huge scoreboard. He was one of the subjects in a book entitled “From Triumph to Tragedy: The Inspiring Stories of Four Iowa Football Legends”.

Fred’s story reached its zenith when the Waterloo school board voted in 2011 to name the newest school in his honor. Today, hundreds of young students attend Fred Becker Elementary School in Waterloo, and walk past a display case in the lobby that tells his amazing story... from hero to obscurity and to hero once again!