News at a Glance

Starting last week (March 09), we began hosting our Sync Call on a new platform - GoToWebinar. We have exceeded the technical capacity of our previous platform and this transition will resolve many of the technical issues we have faced in recent calls.

Alabama
The Alabama WWI Centennial Committee will hold its next planning on March 29.

Arkansas
Arkansas will announce the establishment of an Arkansas WWI Centennial Commission on March 31.

New York City
The Greater New York City Committee is up and running thanks to Commissioner Libby O’Connell. They will officially announce the kick off of NYC’s commemorative activities on Wednesday, April 5 with a press conference in the city. Stay tuned for more details on that event.

Massachusetts
Massachusetts’ Secretary of Veterans Affairs Francisco Urena will issue a proclamation announcing the establishment of a Massachusetts WWI Centennial Committee on Wednesday, April 6. A special thanks to volunteer Stephen Taber, who really took the bull by the horns to get a state commemorative body for the Commonwealth.

State Outreach Collaboration Call - April 7
The next State Outreach Collaboration Call will be held on April 7 at 12 pm EDT. This call will focus on Organizing Overseas Battlefield Tours. Panelists include representatives from from the French and Belgian Tourism Boards as well as a very experienced US-based tour guide. We will also have ABMC representatives on-hand to answer questions about ABMC cemeteries. We encourage you to join the call if your organization plans to operate or otherwise associate with battlefield tours during the centennial - the call promises to share alot of great information. To join this call’s roster, please email Andrew McGreal. If you would like to be added to the Collaboration Call roster, email Andrew McGreal. We will post a recording of this call and a report on it on ww1cc.org/State-Outreach.

We’ve got a new video up in our online video library. It features a C-SPAN interview of the National WWI Memorial architect Joe Weishaar and sculptor Sabin Howard. They discuss the inspiration and meaning behind their design concept. You can view the video here.

Nancy Schaff is a Maryland volunteer who played a major role in standing up the Maryland World War I Centennial Commission last year.

Her interest in the First World War stems from her grandfather’s service in the war as part of the 79th division in the 314th regiment. After the war, the regiment formed an organization called the ‘Veterans of the 314th’, who met every year on Memorial Day to honor those with whom they served. This year will mark the 98th continuous memorial service.

The Veterans of the 314th built a log cabin while they were training. After the war, they bought the cabin, took it apart, relocated it, and put it back together piece by piece to it’s location behind the Washington Memorial Chapel. They kept the chapel open as a free museum on weekends. You can find more information on the website, 314th.org

Nancy attended the Commission’s launch event in D.C. years ago. She then became more involved, creating a grassroots effort in her home state of Maryland connecting individuals with their ancestry in WWI. Today, she uses her expertise to expand the MD WWICC educational program, particularly in the areas of STEM and innovation.

Nancy notes that what she does with the Commission is nothing compared to what her grandfather and others did during the war, so she encourages everyone to get involved with the centennial commemoration.

Equilibrium of Carnage at Verdun - Portugal Joins The War : THE GREAT WAR - Week 85
Published on Mar 10, 2016. The fierce battle of Verdun is still going on and the initial surprise momentum of the German Army under Erich von Falkenhayn is lost. Battles for hill tops and forts turn into carnage where even the winning side is loosing too much men to go on. The Siege of Kut is growing ever more desperate as the there is virtually no food left for the British Army. And in all that Portugal is joining the war.

Artillery and Officer Training - Treatment of Colonial Troops : OUT OF THE TRENCHES
Published on Mar 12, 2016. Indy sits in the chair of wisdom again to answer your questions and this week we are talking about artillery training, the education for officers and NCOs and if colonial troops were used as first in trench warfare.

German East Africa - World War 1 Colonial Warfare : THE GREAT WAR Special
Published on Mar 14, 2016. The military campaign in German East Africa during World War 1 went on longer than the whole war and thanks to Paul von Lettow-Vorbeck and his guerilla warfare is now infamous among the theatres of the great war. But what was the history behind German East Africa and was it really a gentleman's war and what role did the Askari play in it? 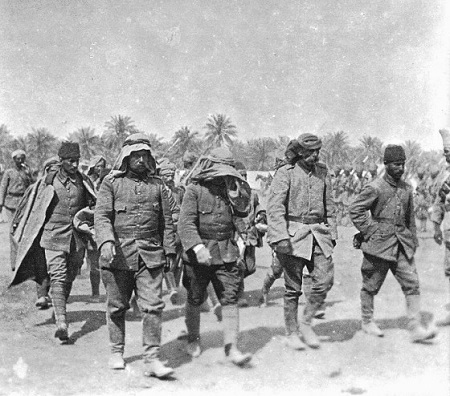 (8-11 March) While the meat grinder that is the Verdun battlefield in Western Europe churns on, the plight of the British contingent under siege in the desert Mesopotamian town of Kut on the Tigris River is becoming more desperate by the day.

In February of 1916, “waves of reinforcements were shipped from France to Basra,” writes historian Eugen Rogan, to break the Ottoman siege. “They arrived piecemeal, often separated from their artillery or horses in the haste of their transport.”

“The chaos of the docks turned Basra into a bottleneck, where units were held up for weeks while sorting their guns and horses before setting off for the front.”

All the while, the British troops trapped at Kut are running out of food and ammunition.

And from there it gets worse. “Inadequate river transport,” writes Rogan, “meant that most troops had to march the 200 miles from Basra to the front line near Kut.”

Two divisions of relief troops are promised to the British, They arrive “but far too slowly and unevenly to achieve numerical superiority over Turkish forces.”

The British commander of the reinforcements faces an impossible option. “Ideally,” observes Rogan, “he would wait until all his reinforcements had arrived before engaging the Ottomans. However with each passing week, fresh Ottoman troops were also reinforcing...” 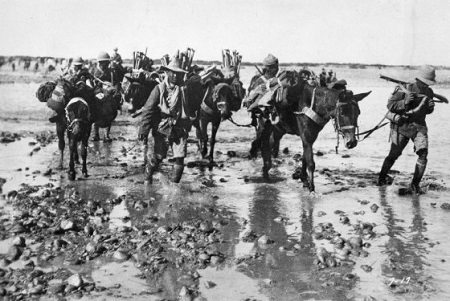