Mississippi
The WWI Monument in Pershing Square in Ocean Springs, Mississippi was rededicated on Saturday April 9 to honor the veterans of WWI with Mayor Connie Moran in attendance. Historian Richard Eckert Sr of American Legion Post 42 was the Project Chairman. He worked with city officials, the Dept. of Public Works, and the American Legion to complete the project.

Before and After images of the WW I Monument and the creation of Pershing Square in Ocean Springs, Mississippi. Note the new landscaping, a light for the flag at night, engraved bricks for veterans, and two benches each with bronze plaques. 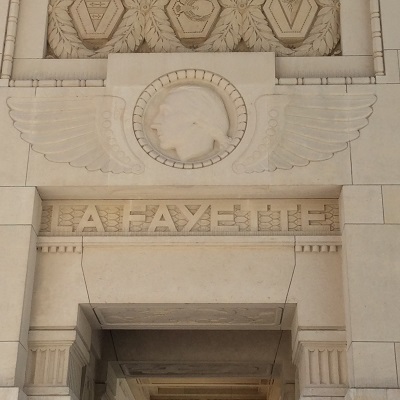 This week our Commissioners were in Paris for the Lafayette Escadrille Memorial Ceremony. The Lafayette Escadrille was a squadron serving in the French Air Service during WWI composed primarily of volunteer American fighter pilots. The squadron was named after the famed Frenchman Marquis de Lafayette, a hero of both the American and French revolutions. Sixty-eight American pilots who were killed in the war are interred at the memorial. The ceremony included speeches from U.S. Ambassador to France Jane Hartley and French Minister of State for Veterans and Remembrance Mr. Jean-Marc Todeschini, a total of three flyovers, and the laying of a white rose on the tombs of each interred pilot.

Midway Village Museum hosted its 4th annual Great War Event - a World War I military event will feature reenactors portraying soldiers and civilians - last weekend. Our own Commissioner Tom Moe was in attendance and had nothing but good things to say about the event. Two-hundred-fifty reenactors transported more than 1,328 visitors back in history. Visitors were able to walk near encampments and tour a reproduction three-bunker trench, talk to over the reenactors about life as a soldier, learn about the various military equipment and combat techniques of this war, and watch large-scale narrated battle reenactments. Learn more on the Midway Village website.

Artists have just one more week to submit their digital portfolios to the United States Mint as a part of the public competition to design the commemorative 2018 World War I American Veterans Centennial Silver Dollar. Phase One of the design competition ends on Thursday, April 28, with up to 20 applicants selected to advance to Phase Two. Phase Two participants will receive a stipend of $1,000 to create a design and plaster for the silver dollar that is emblematic of the centennial of America’s involvement in World War I. For more information, visit the competition webpage.

The Commission will hold its next meeting on May 4 in Kansas City, MO at the National WWI Museum and Memorial. The meeting will begin at 9am; it is open to the general public.

The Meat Grinder at Verdun - Brusilov's New Plan : THE GREAT WAR Week 90
Published on Apr 14, 2016. The Russian offensive at Lake Naroch were an utter failure but the Russian General Aleksei Brusilov is already gearing up for the future mother of all offensives on the Eastern Front. At the same time the meat grinder at Verdun is sucking in German and French troops alive. Erich von Falkenhayn realised that his initial idea probably won't work but he still tries to capture the Mort Homme and Cote 304. In far away Mesopotamia the siege of Kut is still going on even though the British and Indian soldiers are already killing the hunger with Opium pills.

French Invasion Plans - Royal Correspondence - Recruitment : OUT OF THE TRENCHES
Published on Apr 16, 2016. Chair of Wisdom Time! Indy talks about the French plans to invade Germany, the correspondence in between the members of the royal families and how the steady flow of recruits was managed.

Justifying The Failure At Verdun? - The Falkenhayn Controversy : THE GREAT WAR Special
Published on Apr 17, 2016. Was Erich von Falkenhayn really planning to bleed the French white at Verdun or was his claim a fabrication after the fact? Contemporary historians have started to question Falkenhayn's Christmas Memorandum which he claimed to have written in 1915 and which nobody had ever seen. Indy summarises the historical debate around the subject highlighting the arguments by Paul Jankowski and Alistair Horne.

Shell Shock - The Psychological Scars of World War 1 : THE GREAT WAR Special
Published on Apr 18, 2016 The traumata of warfare were certainly nothing new when World War 1 broke out. But the extreme and prolonged exposure to machine gun fire, artillery bombardments and trench warfare led to a new kind of psychological disorder: Shell Shock. Soldiers who were perfectly fine on the outside, were incapable of fighting or living a normal life anymore.

German U-boat Attacks Spread.
An Ultimatum from the American President. 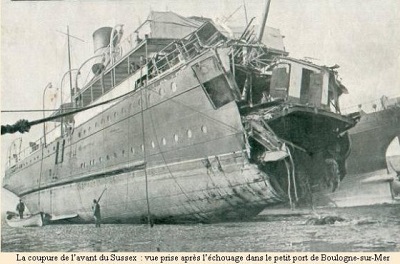 (15-18 April) The American President, Woodrow Wilson is running for reelection, and the war is concerning him greatly.

Since the war began, Wilson pursues a policy of neutrality. There is pressure in the United States to join the Allies in the fighting, but Wilson wants to keep the U.S. out of the war. In fact that will become his main campaign slogan: “He kept us out of the war.”

Still, it’s not been easy. Some German leaders want to pursue a policy on the high seas of unrestricted submarine warfare. “The German High Command,” writes historian Gary Mead, “was preoccupied throughout 1916 by internal wrangling over whether or not to use its submarine weapon in an unrestricted fashion.”

Those in favor are carrying the day. They wish to see “an urgent resumption of unrestricted U-boat warfare in the belief that this would more quickly bring Britain to starvation and surrender.”

In late March and early April a century ago, a spate of submarine attacks on American ships or ships carrying Americans angers Washington. One, the German attack on a French passenger ship, the Sussex, leaves eight dead, several Americans among them.

“Amid this welter of torpedoings, sinkings, anxiety and death, Wilson felt he must act more firmly,” writes Mead. “He pinned his next rebuke, sent to Berlin on 18 April, on the most serious and flagrant recent attack, that on the French ship, the Sussex.”

The Germans claim the ship is sunk by a British mine. In fact the ship is holed by a submarine torpedo. Mead writes, “Wilson had no time for this squirming....” 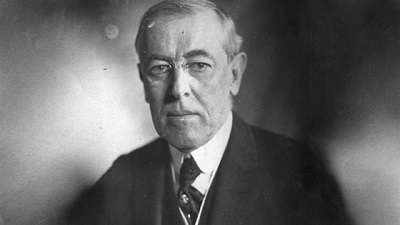