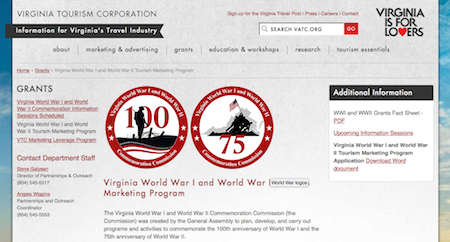 3. Ellouise Schoettler's one woman show is the true story of 64 professional Maryland nurses who went to WWI

Virginia
Last week Commissioner Rob Dalessandro and Commissioner Edwin Fountain met with Cheryl Jackson, Executive Director of the  Virginia World War I and World War II Commemoration Commission.
We are very proud of Virginia-  what started as a meeting with about 5 of us in City Council building in Richmond two years ago has turned into an official commission with office spaces in the General Assembly Building in Richmond. We have a network of really wonderful WWI volunteers there and with the backing from the state capitol now, Virginia is really doing some wonderful things for the commemoration:

Directions
The Bedford information session will be held in the Welcome Center, which is located at the foot of the Memorial.  A special guided tour of the D-Day Memorial will be available following the program.

State outreach Collaboration Call
We’ll take a break for the month of July - we will have no call tomorrow, but we will reconvene on August 4th. August’s call will look at the Commission’s educational resources as we enter into the 2016-2017 calendar year!

In the years following the Great War, thousands of Memorials to those who served in WW1 were built in cities and towns across America .Over the decades, exposure to the elements has taken a toll on many of these memorials.
On July 15, the U.S. World War One Centennial Commission, the Pritzker Military Museum & Library, along with supporting organizations like the American Legion, will launch 100 Cities / 100 Memorials: a national matching grant challenge to preserve WWI monuments.


Story of WW1 nurses told in one-woman show
Ellouise Schoettler
"Ready to Serve" is the true story of 64 professional Maryland nurses from Johns Hopkins University who went to France in WWI to staff an Army Field Hospital. This one-woman show by spoken word artist Ellouise Schoettler uses the nurses' own words to bring their little known eye-witness story to life again. Read about her research into the letters and diaries that reveal the difficulties of everyday life for these women during 1917 and 1918 on the battlefields of France. DISPATCH readers in the national capital region can take in the show during July. Find out more about "Ready to Serve" and get performance information here.
First performance: July 9 - then four more  7/10, 7/13, 7/20, 7/23
1. Ellouise Schoettler: Performance, The Hello Girls, The MD Women's Heritage Center, Baltimore, March 2016
2. US Army Nurse tending a patient in France - photo courtesy WIMSA
3.  Hopkins Nurses of Hopkins Base Hospital 18 - taken in NYC June 12, 1917 at the docks just before boarding the USS Finland  - Photo from LOC file.
4.  US Army Nurse at the bedside - photo courtesy of WIMSA

EAA AirVenture- Oshkosh, WI
http://www.eaa.org/en/airventure
The EAA AirVenture Oshkosh is an annual gathering of aviation enthusiasts held each summer at Wittman Regional Airport in Oshkosh, Wisconsin. It’s the largest aviation show in the world.
The EAA AirVenture Airshow will take place July 25-31 and the  2016 focus this year is WWI.  This is huge, week long event with 700,000+ attendees and dozens of defense contractors.
We will have a booth set up for the week.. Our Commissioners have daily speaking roles in two different amphitheaters that seat 2500+ people
Let us know if you plan to attend and can help us at our booth! We’ll be selling WWI CC merchandise, etc.  contact Meredith Carr at meredith.carr@worldwar1centennial.org, if you plan to be at the EAA AirVenture Airshow July 25-31.

Alright, as always, The Great War Channel on youtube has several great new videos up this week. Check them out at youtube.com/TheGreatWar.

http://greatwarproject.org/
And now we’ll move onto 100 years ago this week on the ground with Mike Shuster. Join us again next week! Register here.