Sync Call for Wednesday May 13 at Noon EST 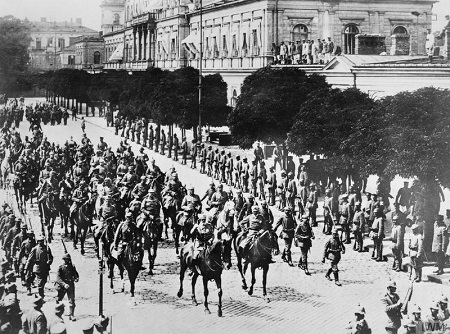 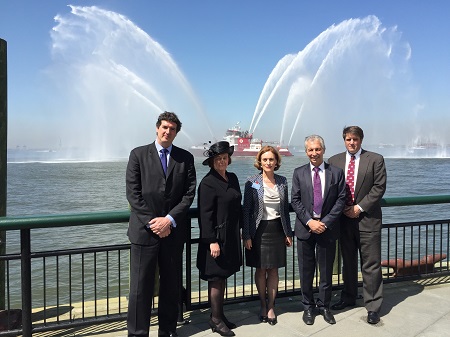 Our NYC Lusitania wreath-laying ceremony was a success! Diplomats, dignitaries, and descendants joined us to pay their respects to the victims of the tragic sinking. We have a short video of the event available on the WWICC Homepage. Our panel on the Lusitania in Washington DC went just as well as its NYC counterpart, receiving coverage on CSPAN.
A big thank you to everyone who made either event possible!

Recap of the Embassy Events for EU day
Our participation in the EU Embassy Open Houses went well. We had over 10,000 visitors at UK Embassy and 3,200 at Belgium Embassy, meaning we exposed 13,200+ people to the WWICC and our mission over 6 hours! As a result, we've gained a multitude of new social media followers and two pages of volunteer candidates. A special thanks goes out to the volunteers who helped that effort.

All Government Briefing
Next Thursday, May 21, we will hold an all government briefing at the US Navy Memorial. Here we will brief our Ex Officio Members, Advisors and partner agencies on our mission, timeline and significant events.

Design Competition Press Announcement
This is the announcement many of you have been waiting for... We will announce the design competition for the WWI Memorial at Pershing Park in Washington, DC on Thursday May 21, 2015 at the National Press Club at 2pm. The announcement is open to the public and afterward that portion of our website will go live. This is very exciting to us, we can't wait to see submissions and move this along.

National WWI Museum Memorial Day Weekend Events
The National World War I Museum in Kansas City, MO is hosting 10 events over the course of the Memorial Day weekend. As the commemoration of the Centennial of World War I (2014-19) continues, the Museum serves as a fitting place to honor and recognize the men and women who sacrificed their lives while serving their country during Memorial Day Weekend.
For more information:https://theworldwar.org/memorialday2015

We Need Volunteers!
See the listings below!

Virginia Dilkes:
We three sisters have a keen interest in the centennial commemoration of World War I. I live in Atlanta, Georgia, and will talk about how we became interested in World War I. My sister, Lola, lives in New Jersey and will talk about our recent trip to the annual meeting of the Society for Military History and our work on behalf of the World War I Centennial Commission. Our sister, Georgia, lives in Texas and will talk about her activities in Texas for veterans' affairs and her work for the World War I Centennial Commission.
Our father, Sergeant Charles Edward Dilkes, fought in World War I. He shared in the patriotic fervor that engulfed our country when we declared war on Germany in 1917 and volunteered to serve in the U.S. Army as an engineer-soldier. He was assigned to the 1st Division and served under General Pershing from May 1, 1917, until his discharge on September 19, 1919. He fought in four battles on the Western front and continued his service as a part of the Army of Occupation in Germany. Despite orders to the contrary, he kept a daily diary, sometimes burying it before battle in the event the Allies were not victorious. When he returned home, he wrote his memoirs based on his diary but never published them. In honor of the centennial commemoration of World War I, my sisters and I decided to publish his memoirs: Remembering World War I: An Engineer's Diary of the War by Charles Edward Dilkes. We have spent 15 years editing his memoirs and relating them to the documented history of the war. We are proud to share our father's experience with those who respect the sacrifices made to keep our country free.

Georgia Dilkes Harris:
My name is Georgia Dilkes Harris, living in Colorado City, Texas and a volunteer for the State of Texas. I have spoken with legislative aid, Daniel Sheppard, who works for Dustin Burrows, the Texas House of Representatives for District 83. We discussed current national projects for the World War I Centennial Commission and the development of programs such as World War I courses at Texas universities, the Library of Congress digitization project of letters to home from World War I veterans, the World War I Memorial Inventory Project, and the status of the dreadnought USS Texas. I encouraged him to listen to the next Wednesday "gotomeeting" for further insight into the US World War I Centennial Commission activities and to contact General Valenzuela and Rebekah Wilson. Mr. Sheppard encouraged me to contact US Congressman Mike Conaway, Chairman of the US House Agriculture Committee, which I will do in the following days. After talking with the canteen manager at the West Texas VA Medical Center, Big Spring, Texas, she has graciously put up a display for the World War I Centennial. Two weeks ago I spoke with the Vice Chairman of the Centennial Commission of the American Legion for the state of Texas, Ron Pietzsch, and was told they are in the planning stages for a program in San Antonio in 2018. Discussion has begun with Patty Pharis, the curator for the Heart of West Texas Museum in Colorado City, Texas, regarding a possible inclusive pictorial program for the wars of the 19th and 20th centuries in which the United States was involved including World War I. Several weeks ago the Texas volunteers shared emails in response to Dr. Marble's outreach for a meeting. This seems to be a hurdle we need to work through. I look forward to a voice or data meeting with the Texas volunteers as indicated in Dr. Marble's email.
Thank you for this time to speak on volunteering for the World War I Centennial Commission, and as we approach this Memorial Day, a special thank you for all our troops.

Mr. Mike Hanlon of Worldwar1.com reviewed Remembering World War I: An Engineer's Diary of the War for his website. He believes it is valuable not only for presentation of a personal side of the war but also for showing the oft overlooked perspective of a combat engineer in the First World War. He would highly recommend it to anyone interested in the war.

Both embassy open houses were great. We have no hopes of completing amazing events like these without our volunteers - so thank you very much for continuing to make us a huge success.

In May 1915 a German-Austro-Hungarian offensive was launched against Russia that would result in the greatest victory of World War I by the Central Powers. 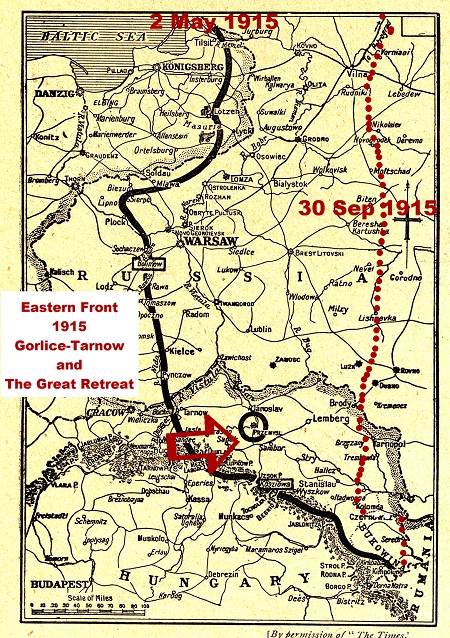 For 1915 the chief of the German General Staff, Erich von Falkenhyn had decided to look to the east. His forces were bogged down in the West and his principal ally, Austria-Hungary, was almost "steam-rollered" in the winter campaigns in Galicia.For his first operation, he chose to attack over the Carpathian Mountains into Galicia against Russian forces that were still attacking. Eight divisions were moved from the Western Front to form the new Eleventh Army under the command of aggressive general August von Mackensen. Flanked by two Austrian armies, the force attacked in early May near the rail centers of Gorlice &Tarnow.

Results:
The Gorlice-Tarnow Offensive succeeded beyond all expectations: one after another, Russian defensive lines were penetrated. Fortress Przemysl was recaptured; and Warsaw fell. Then, On July 9, Russia's supreme commander, Grand Duke Nicholas, ordered a scorched-earth retreat. By September, Poland and Galicia were lost, the Eastern Front was 300 miles east from its August 1914 starting point. The Russian Army by the end had lost 2 million men, killed, wounded, or captured.

This was the greatest victory by the Central Powers in WWI

Next Week: The Spring Allied Offensive in Artois

Battles East: A History of the Eastern Front of the First World War by G. Irving Root