Sync Call for Wednesday May 20 at Noon EST 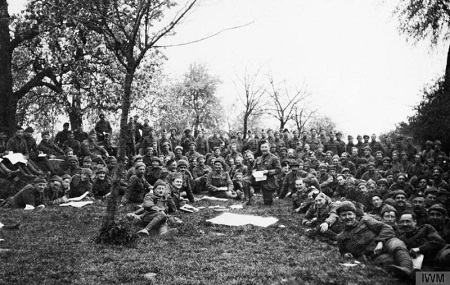 Exciting news! Last week the White House announced that WWI soldiers Sgt. William Shemin and Pvt. Henry Johnson will each receive the Medal of Honor posthumously for their actions in the war. 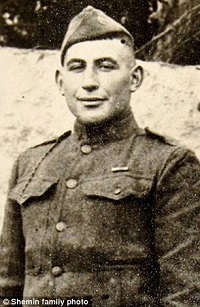 Sergeant William Shemin will receive the Medal of Honor posthumously for his actions while serving as a member of the 47th Infantry Regiment, American Expeditionary Forces. While serving as a rifleman from August 7-9, 1918, Sergeant Shemin left the cover of his platoon's trench and crossed open space, repeatedly exposing himself to heavy machine gun and rifle fire to rescue the wounded. After officers and senior non-commissioned officers had become casualties, Shemin took command of the platoon and displayed great initiative under fire, until he was wounded, August 9. 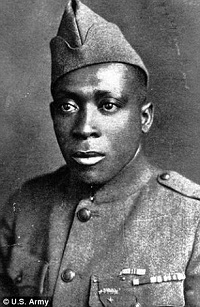 Private Henry Johnson will receive the Medal of Honor posthumously for his actions while serving as a member of the 369th Infantry Regiment, American Expeditionary Forces. Private Johnson entered the Army on June 5, 1917. He was assigned to an all-black National Guard unit that would later become the 369th Infantry Regiment. The Regiment was ordered into battle in 1918, and Private Johnson and his unit were brigaded with a French Army colonial unit in front-line combat. While on night sentry duty on May 15, 1918, Private Johnson and a fellow Soldier received a surprise attack by a German raiding party consisting of at least 12 soldiers. While under intense enemy fire and despite receiving significant wounds, Johnson mounted a brave retaliation resulting in several enemy casualties. When his fellow soldier was badly wounded, Private Johnson prevented him from being taken prisoner by German forces. Private Johnson exposed himself to grave danger by advancing from his position to engage an enemy soldier in hand-to-hand combat. Displaying great courage, Private Johnson held back the enemy force until they retreated.

The award ceremony will take place on June 2.

We are happy to report that the VA WWI Centennial Commission website is nearing completion. Virginia is the first state to take advantage of the opportunity to house their state website within our national www.worldwar1centennial.org. Their site will go live next week on May 26! You can check them out on the Virginia WWICC Facebook page as well.

The GI Film Festival is happening now in Fairfax and Washington DC. It will include three WWI movies including Never Forgotten by the ABMC which premieres on Saturday at 3:30pm as well as The Millionaires' Unit and Soldiers' Stories which show on Sunday at 3 and 3:30 respectively. Check out our calendar for details.

As we announced last week, tomorrow is the our official unveiling of the design competition for the WWI Memorial at Pershing Park in Washington, DC. It will be at the National Press Club at 2pm. This is open to the public and afterward the memorial design competition portion of our website will go live. This is very exciting to us, we can't wait to see submissions and move this along.

A big thank you to our Dir. of Communications, Chris Isleib, for his work on this. There have been several stories on this already:

The AP Wire story is now out on about 50-60 outlets nationally. Here's a small sample:

A new challenge for our listeners: as you know, we are trying to digitize our efforts in commemorating the centennial. You can help us do it! Just Download Google's Camera app to your phone and use the PhotoSphere setting to take 360° pictures of your local WWI monuments and memorials. The app shows you where to point the camera and then stitches the photos together to create the image. Send them in to us and we'll post the best submissions!

Check out this link for a tutorial: https://www.youtube.com/watch?v=UozBwluWW0M

And this link for more information: https://www.google.com/maps/about/contribute/photosphere/

There will be several ceremonies at the US Navy Memorial in Washington DC:

Monday: American Veterans' Center National Memorial Day Parade in Washington, DC
Chairman Rob Dalessandro will ride in the WWI Packard Truck with our awesome volunteer, Dave Lockard. Parade will commence at the corner of Constitution Avenue and 7th Streets, NW. It will proceed west down Constitution, past the White House, ending at 17th Street. Participants will pass by the nation's monuments, museums, and hundreds of thousands of spectators waving their flags and cheering for our country's heroes – the men and women who wear the uniform of our armed forces.

The Los Angeles Memorial Coliseum will open its gates for veterans as a tribute to their service to our country. The Coliseum was commissioned in 1921 as a memorial to Los Angeles County veterans of The Great War and was rededicated on Nov. 11, 1968, in ceremonies commemorating the 50th Anniversary of the 1918 Armistice, to all who served in the United States Armed Forces during World War 1. The plaque commemorating this occasion is inscribed with the words "Lest We Forget...May the Torch of Freedom Always Burn Bright." Self-Guided Tours will be offered from 10am-4pm while Guided Tours will be offered at10:30am and 1:30pm. Head of Los Angeles Outreach for the United States World War One Centennial Commission, Courtland Jindra, will be speaking at the beginning of the Guided Tours regarding the history of WWI and the Coliseum.

The Richmond Department of Parks, Recreation & Community Facilities will present a program in honor of our nation's veterans on Monday, May 25, at 4:00 p.m. at the World War I Memorial Carillon in Byrd Park. Featured will be a concert on the Carillon bells by longtime city carillonneur Larry Robinson, and a vocal concert by renowned barbershop group The Virginians. Please call (804)646-3680 for more information.

At the National WWI Museum at Liberty Memorial

The National World War I Museum in Kansas City, MO is hosting 10 events this Memorial Day weekend. Check them out on their website! https://theworldwar.org/memorialday2015

Dr. Allison Finkelstein first became interested in WWI while working as a teacher's assistant at a school in the english country side. British curriculum had a strong focus on WWI which included taking the students on a trip to the Ypres and Somme Battlefields. World War One British commemorative culture impressed her and sparked her interest in WWI.

After returning to the United States she began to look more into U.S. Commemorative efforts and found that they were lacking and decided to explore the topic in more depth. She then wrote her dissertation on women's commemoration of WWI

While writing her dissertation she had the opportunity to intern at the American Battle Monuments Commission for two summers, where she now works. She was introduced to the WWICC while at a WWI trade show last year and has since begun to volunteer helping the WWICC with research, outreach and coordination.

We'd like to thank Mark Levitch for help in selecting 20 sites to propose to Google for Google Trek. Thank you!

The Opening of Hostilities on the Western Front

On 23 May 1915 Italy in accordance with the secret Treaty of London signed in April declared war on Austria-Hungary. The following morning Italian Forts opened fire on Austrian forts in the frontier zone between Rovereto and Asiago. 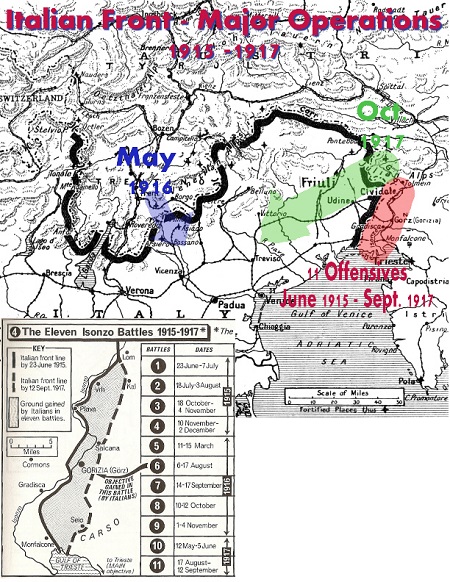 For the next 2 ½ years the fighting would be along the boundaries set by a commission in 1866 that gave Austria-Hungary highly defensible borders. (This would change dramatically after October 1917.)

S-shape defined by Italian Alps: Dolomites, Venetian and Julian, except for the last 20% around the city of Gorizia near the Adriatic. Italy had entered the war to acquire territory: Primarily the Trentino (South Tyrol) and Trieste and territory beyond along the Dalmatian coast. The mountainous areas, however, were not conducive to offensive operations. With two major exceptions, the fighting here, on 80% of the front, was to gain high points for observation and guard the mountain passes.

The only place where Italy could attack with any possibility of achieving their war aims was in the tail end of the front around Gorizia. This area, known by the River name in the area, the Isonzo or today, the Soca, would be the great killing ground of the Italian Front in WWI. 60% of the casualties for both sides on this front would occur in this small area.

The key position in the area is the Carso Plateau south of Gorizia along the Adriatic. Described as a howling limestone wilderness, treeless with thorny shrubbery, and with frying-pan like heat in the summer and howling, freezing winds in the winter. It had to be crossed to take Trieste.

First month: Italian Army would deploy and try to seize advantageous positions in the mountains and along the Isonzo. Austria would deploy defensive troops under the command of an excellent defensive general Svetozar Borievic.

Then, on 23 June, the Italian Commander would launch the First Isonzo Offensive, which would fail with large casualties. Three more failed attempts would be made in 1915 and seven more in 1916-1917. Almost all of the 11 Isonzo Offensives were dismal failures, but the Austrians had been driven near the breaking point by the fall of 1917. Enter the German Army.

With the main Italian fighting forces – the Second and Third Armies – deployed along the Isonzo. They were vulnerable to an attack from the rear and encirclement. In 1916 the A-H Commander Conrad von Holtzendorff Ordered such an attack (see map), but it was underpowered and sputtered out on the Asiago Plateau. However, in 1917, the German's – fearing an Austrian defeat -- sent reinforcements to the Italian front allowing the mounting of an offense later called the Battle of Caporetto (map). This would prove to be a "game changer" with a huge breakthrough and the annihilation of an entire Italian Army, the Second. The last year of the war on the Italian Front would be substantially different in character with the front radically reshaped.

Next Week: The Diplomatic Response to the Lusitania Sinking