Sync Call for Wednesday May 27 at Noon EST 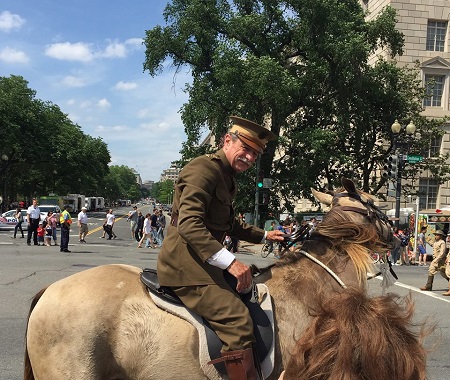 Much of the work put into making this latest project a reality was led by Dr. Lynn Rainville, a Research Professor in the Humanities at Sweet Briar College and a member of the Virginia WWI Centennial Committee. Dr. Rainville’s background is in history and anthropology. She has been studying WWI for the past year while documenting and writing a book on WWI memorials in Virginia.

As you know, last week we officially announced the our competition for the design of the National WWI Memorial at Pershing Park! Details about the competition, as well as the competition manual can be found here.

You can also help make this restoration a reality by making a donation to the Memorial Fund.

They deserve a memorial. We can build it for them. Share this link on social media and on your organization's website--however you can get the word out. We cannot do this without your support. Thank you.

The Devil Dogs
The Commission has recently endorsed a film project entitled: The Devil Dogs. The film is about the remembrance of the Battle of Belleau Wood and of the American Marines who came to France in 1918 to fight for freedom at the cost of 7000 lives. This battle remains a founding element in the history of the Marine Corps and is the Battle in which the Germans nicknamed the Marines “Devil Dogs” for their courage and persistence in battle. The films follows the passionate guide Gilles Lagin, as he leads the descendants of the soldiers of the Great War in the tracks of their ancestors. Here is a link to their Facebook page and their website.

Our volunteers for our DC event were awesome: Dave Lockard with the Packard truck- Special thanks to Steve Kersten for coming in all the way from Wisconsin to help us. Thanks to Scott and Lisa Webb for hauling the Packard Truck with their F 350 from Pennsylvania- Also Major Micheal Gambone at Fort McNair for allowing us to park the hauling rig- it takes a village. Thank you all as the truck truly makes an impact in the parade.

“The Young Marines” are JROTC students from West Palm Beach FL. These students dressed up as doughboys and marched in the parade. At our booth at the Navy Memorial was Terry Walker, Ken Schoppmann, Virginia Dilkes (making the trek up from Georgia!) and bringing out her son and granddaughter to volunteer with us.

3. How you can help the WWICC this week:

Lusitania and America's Road to War

America would not enter the war for two more years but the Lusitania incident accelerated the nation's march to the battlefields of Europe in four mutually reinforcing ways: 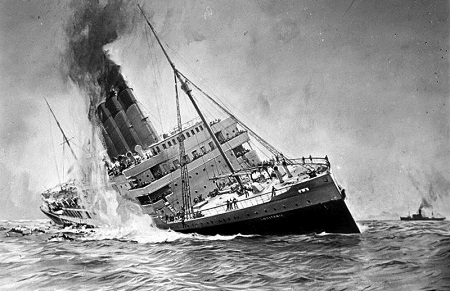 years. This trend was intensified by further German heavy-handedness, sabotage and espionage in America, and a superior propaganda effort by the British in particular.

Initially, a number of Democrats and Republicans, particularly such prominent Middlewestern insurgents as Robert La Follette of Wisconsin and George Norris of Nebraska, declared that they opposed any war-like moves over the sinking. The President's course of action, however, would drive Secretary of State William Jennings Bryant – the only true "Neutral" among his close advisors to resign.

The year long subsequent correspondence with the German government would seem to win concessions about limiting the use of submarines, but it resulted in "drawing a line in the sand." Three American notes over the Lusitania sinking and subsequent sinkings resulted in a German pledge, which they later abrogated in January of 1917.

In the first Wilson note (13 May 1915), signed by Secretary of State William Jennings Bryan, Wilson affirmed the right of United States nationals to travel on merchant ships of their choosing, urging Germany to abandon unrestricted submarine warfare against commercial ships of any nation. Notably, Wilson did not warn to the American people against traveling on belligerent ships for their own safety.

In the second Wilson note (9 June), Wilson rejected the German arguments that the British blockade was illegal and an attack on innocent civilians. Wilson also (incorrectly) denied the German accusation that the Lusitania had been carrying munitions. Secretary of State William Jennings Bryan resigned in protest over this letter, stating that Wilson was being too provocative and that the President’s position was not befitting a leader of a neutral country. Wilson appointed Robert Lansing (an Anglophile) as Bryan’s replacement.

The third Wilson note (21 July 1915) was an ultimatum, where the United States would consider any subsequent sinkings of merchant vessels with Americans aboard as “deliberately unfriendly.” Germany was careful about their submarine attacks for the rest of the year, but a 1916 incident rekindled the controversy.

On March 24th 1916 a German submarine in the English Channel attacked what it thought was a minelaying ship. It was actually a French passenger steamer named the Sussex and, although it didn't sink and limped into port, fifty people were killed. Several Americans were injured and, on April 19th, President Wilson addressed Congress on the issue. He gave an ultimatum: Germany should end attacks on passenger vessels, or face America 'breaking off' diplomatic relations.

Germany's Response Was the "Sussex Pledge", a promise given to the United States of America on May 4th 1916 in which Germany promised to alter their naval and submarine policy of unrestricted submarine warfare and stop the indiscriminate sinking of non-military ships. Instead, merchant ships would be searched and sunk only if they contained contraband, and then only after safe passage had been provided for the crew and passengers.

At the time, this was considered a diplomatic victory for the President.

The shifting public attitudes led to a bottoms-up surge of interest in getting the nation ready to wage war should it be drawn into the conflict. Eventually, President Wilson joined in supporting the "Preparedness Movement." The events and possibilities for hostilities to break out on the Mexican Border added to the concerns about military capabilities. The Preparedness Movement involved a number of disjointed activities including:

Public Rallies: Parades of 100,000+ in New York City, 50,000 in San Francisco which also had a terrorist bombing. Anti-German, pro-interventionist movies and articles started appearing. Theodore Roosevelt and Leonard Wood were the most conspicuous boosters of the movement.

Officer Training: Plattsburgh Movement and similar programs would provide many officers for the AEF

Congressional Action: The National Defense and Naval Acts of 1916 expanded the Army and Navy, organized the National Guard for Federal service, and improved capabilities for mobilizing a larger Army.