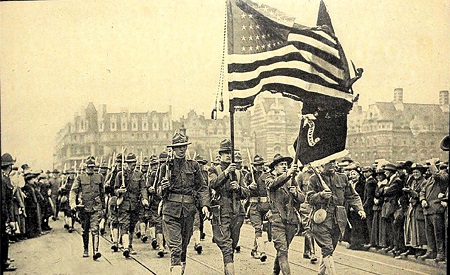 The WWICC is pleased to introduce our new Chief Development Officer, Roger Fisk. Roger is from Boston and has worked on the last three presidential campaigns for John Kerry and Barrack Obama. He has served President Obama in a number of capacities since Jan 2007.

Roger Fisk has been involved peripherally with the WWICC for the past 7 to 8 months and is excited to be an official part of it. He thinks it is great to a part of something that reaches back to the past but will have such importance going forward, and he believes it's an honor to be able to work on something such as this that would honor the thousands of Americans who fought and died for their country.

Medal of Honor Ceremony Yesterday at the White House

As we mentioned last week, President Obama awarded the Medal of Honor posthumously to Army Sgt. William Shemin and Private Henry Johnson in a ceremony at the White House. The story has obviously received stories on the CBS Evening News, NBC Nightly News, and on ABCnews.com

Our partners at the History Channel have also produced an article and video about the Harlem Hellfighters and Henry Johnson’s story of valor and courage. It’s a moving piece and I encourage you to watch.

As you know, last week we officially announced the our competition for the design of the National WWI Memorial at Pershing Park! Details about the competition, as well as the competition manual can be found here.

You can also help make this restoration a reality by making a donation to the Memorial Fund.

They deserve a memorial. We can build it for them. Share this link on social media and on your organization's website--however you can get the word out. We cannot do this without your support. Thank you.

We want to thank all those Historians who took the time to write our one page subject information that will accompany our letter to the Stamp Committee. Mitch Yockelson, Allison Finkelstein, COL Charles Bowery, Keith Muchowski, Tom Faith, Ed Furgol. Troy Lambert, and there were a few more that helped out Mitch. Thank you all so much for taking the time to do this! We had many more volunteers for this activity but we ran out of work for them. We love that we have so many enthusiastic people. You really make it possible for us to complete our mission. And you can STILL help us with stamps be sending a letter to the USPS committee to encourage support for a series of centennial stamps.

3. How you can help the WWICC this week:

Winston Churchill: WHO DID WHAT IN WW1?
Jun 1, 2015. Winston Churchill's life is actually too big for just one video. Even before World War 1, some biographies about him were published. His career during the Great War saw sheer brilliance like the modernisation of the Royal Navy and utter failure like the Gallipoli Landings. Find out all about Winston Churchill in our portrait.

Frontline in the Alps - Italy Declares War: THE GREAT WAR Week 44
May 28, 2015. After the defeats of Austria-Hungary against Russia, Italy is seeing her chance to grab disputed territories from them. Even though they are not prepared for a full scale war economically or militarily, the declare war against the Central Powers. So, just one month after the landing at Gallipoli, yet another front is opened in Europe. Meanwhile the Russians are still on the run from August von Mackensen and in Gallipoli the fighting stops to collect the dead.