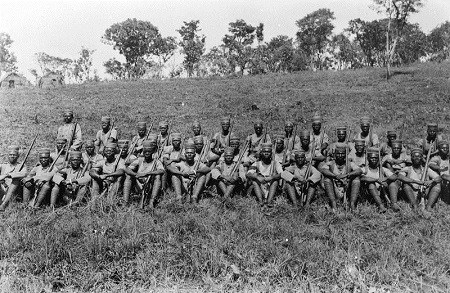 World War I Symposium in Alabama
On June 22 the Alabama Department of Archives and History will host Remembering the Great War: A Symposium on World War I. This is a free public symposium featuring noted scholars who will discuss the causes and consequences of the Great War, the experiences of the soldiers and communities who sent them, and the ways in which we have and continue to remember the War's significance. The event will be held on June 22, 2015 from 9:00 am to 4:00 pm at the Alabama Department of Archives and History in Montgomery, Alabama.

Genealogy Series
Starting next week , our social media team will be publishing a series on genealogy and how to research your WWI ancestors. Stay tuned for that!

Dennis Skupinski got into collecting military equipment and uniforms back in the 1970s. Everyone around him was so interested in every war but World War one so Dennis decided to be different. The kind of uniforms he has collected over the years are that of enlisted people, those on the western front, and junior officers.

Due to his interest in WWI Dennis has been trying to get a commission in Michigan started for some time now. After the little support he was receiving from the governor and other elected officials he contacted the WWI Centennial Commission office and got in touch with Rebecca. After three years of trying Dennis finally got the legislators in Michigan to agree to look at making a commission and possibly putting it into legislation.

Dennis developed a marketing grass roots plan to help him get his goal accomplished. He started by using Facebook as his webpage where he would post daily updates. He then added a Flickr account, which acted as his online museum for the all the uniforms and things he has collected. Third he created videos which would be on YouTube and local new stations. These videos included Lots of updates (Local, state, national), creating documentation of what happened in Michigan in WW1. This will serve as referencing in arguing for a commission.

We want to shout out to our Kansas volunteers for standing strong and marching forward on trying to get a some sort of WWI activity in Kansas.

South Africa in WW1: THE GREAT WAR Special feat. Extra Credits
June 6, 2015. The history of South Africa was already influenced by ethnic tension between the natives and the recently arrived colonists from Great Britain and the Netherlands. The Boers had actually fought two wars with the Empire for self determination. Still, in World War 1 they fought for the King. South Africa saw major action in German East Africa against Paul von Lettow-Vorbeck. But their troops were tested in Europe as well. For example in Delville Woods too where they fiercely fought against the attacking German Army.

The Key to Success is Artillery: The Great War week 45
June 4, 2015. When Przemysl falls for the 2nd time and when the British and ANZAC troops fail at Gallipoli again, one thing becomes clear: Artillery is the key for future battles. August von Mackensen had used it with great success at the Gorlice-Tarnow-Offensive and the French even diverted one million men to shell factories. Meanwhile German Zeppelins bombed London and the US sent submarines for aid.

Africa and the Great War 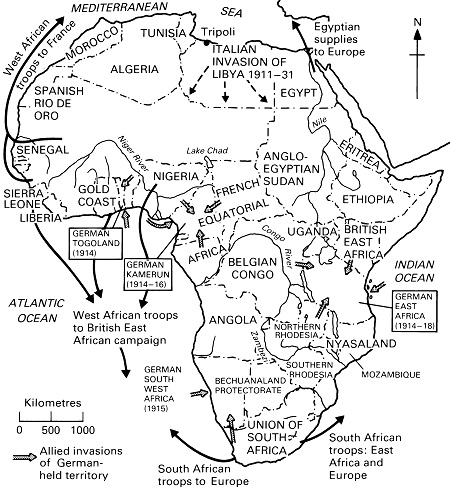 The European War of August 1914 quickly spread to Africa and would soon lead to fighting throughout the continent. It would be a sideshow, but a vast and costly sideshow for those involved.

The initial impulses of the white settlers, however, had been to maintain order among the natives, particularly in sub-Saharan Africa. The earliest fighting involved reducing German radio and coaling coastal stations in the name of keeping the sea lanes open.

However, both the expansionist-minded among the locals and the European governments harbored territorial aims. The German colonies, being smaller and abutting the territories of several Allied war participants seemed to be easy pickings. The Allied parties were usually the aggressors.

The campaign in East Africa produced one of the most admired soldiers of the war: German Col. Paul von Lettow-Vorbeck, who tied down Allied forces 10 times his size past the Armistice date. He returned home a hero, Berlin took a break in the revolution to welcome him. Transport and supply were the big problems in Africa. Vast numbers of bearers were conscripted locally, usually 2-3 times the number of soldiers. Yet they suffered casualties at the same, sometimes higher, rates. Disease was the big killer: Besides Malaria, Black Water Fever and other exotic tropical diseases. Colonial troops from Africa were a great asset for the Allies, especially France. Take Senegal for example:

By the end of 1918, a total of 163,000 Senegalese Riflemen were serving in French forces in the west. Tirailleur battalions served with the US First Army at St. Mihiel and in the Meuse-Argonne campaign. 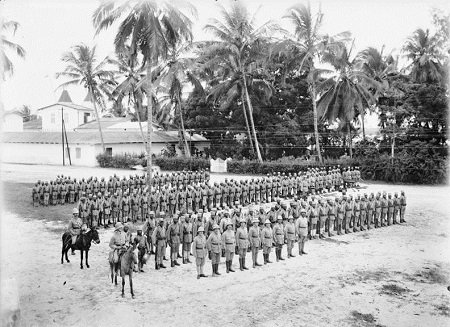 The Allies — France, for example — emerged victorious in 1918, and moved quickly to improve public services in her African colonies and take advantage of the good will and prestige of the returning native veterans.

Books:
Tip and Run - the Untold Tragedy of the Great War in Africa, by Edward Paice, – Import, 2007