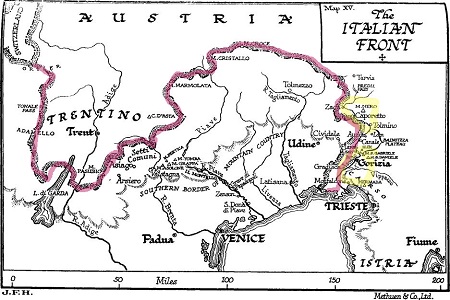 Devil Dogs
A Commission endorsed project is getting under way and needs your help. Devil Dogs, the story of the only Honorary Marine in Europe as he helps a family retrace the footsteps of its Marine ancestor who foot during the Battle of Belleau Woods. Head to Devil Dogs’ Kickstarter page to see how you can support them. 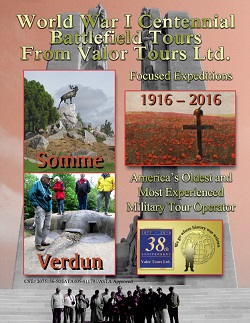 Tours with Mike Hanlon
Our own Mike Hanlon is leading tours in France next summer with Valor Tours company. There are two planned trips: one to Verdun in May 2016 and the other to the Somme in August 2016. For more information, check out the flyer we’re sending out to our sync call roster.

We are moving....
Tomorrow the Commission staff will move from 1 Thomas Circle in Washington DC to 1776 G St NW. Our mailing address is and will remain (701 Pennsylvania Ave NW Suite 123). You are all welcome to come visit us anytime, just please note the new location.

A shout out to those who have written and sent in letters to the Stamp Committee--Commission O’Connell, Virginia Dilkes, Georgia Dilkes Harris, Lola Dilkes Koniuszy, Arthur Tulak, and to everyone else we haven’t heard from!

A Genius and A Madman - Fritz Haber: WHO DID WHAT IN WW1?
June 22, 2015. Fritz Haber is one of the most famous German scientists. His inventions made it possible to feed an ever growing human population and influence us till this day. But Fritz Haber had a dark side too: His research made the weaponization of gas and the increased production of explosives possible. Find out more about the life of Fritz Haber in our biography.

Cavalry, Spies and Cossacks: THE GREAT WAR Week 47
June 18, 2015. The war seems like a romantic novel this week: In the East the Russians are saved by Cossack Cavalry while August von Mackensen's artillery is plowing through Galicia. In the meantime, the British discover a German spy ring in London and the French gain a few miles in the west.

Almost everyone recalls that Caporetto, in October 1917, was the most famous battle of the Great War in Italy. But what was the war like before Caporetto?

For the most part, the action on the Italian Front was concentrate in its Eastern-most 15% or so along the Isonzo (now Soca) River.

Throughout most of the rest of the mountainous 400-mile length of the S-shaped Italian Front the dominating positions almost everywherewere in the hands of the Austro-Hungarian forces. A Delimitation Commission following the war of 1866 had intentionally given Austria a highly defensible frontier

The 60- mile-long valley of the Isonzo [Soca] River running from the Julian Alps south to the Adriatic Sea bisected the only practical area for offensive operations by the Italian Army during the Great War. Supreme Commander Luigi Cadorna judged he could feasibly acquire a series of territorial objectives from Gorizia to Trieste down to the Dalmatian Coast.

The lower coastal zone seemed to present more possibilities for advancing, but it featured some peculiar geography and geology that aided defending forces. Most important was a vast, plateaued scrub wilderness, scorching hot in the summer, freezing in the winter due to the "Bora" winds from the Alps, between Gorizia and the Adriatic, known as the Carso.

Secondarily, the upper zone — actually in the Alps, seemed to present possibilities for getting deep into the enemy rear if they could get over the mountains – which they never quite did. 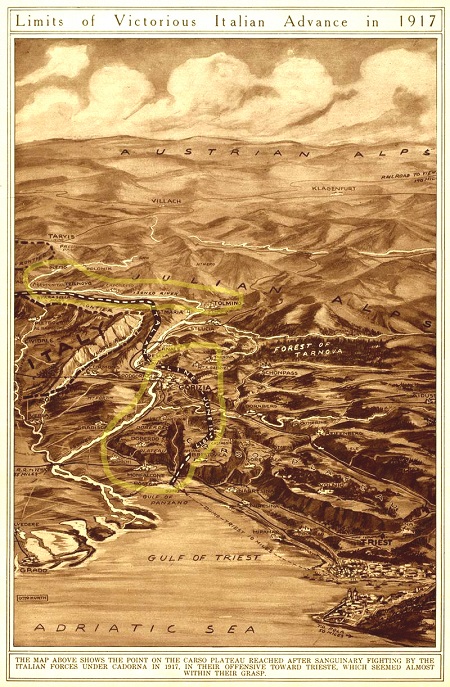 Four battles would be fought in this sector in 1915, five in 1916, and two in 1917. The First Battle of the Isonzo began with a week-longartillery barrage from General Cadorna's forces on 23 June 1915
After failing to make any other significant progress, Cadorna halted on 7 July. He realized his artillery was inadequate and he was further hindered by a chronic shortage of shells which was never to be resolved.

In hindsight in what seems to be a fit of monomania, Cadorna continued attacking along the Isonzo, primarily in the Carso region, but also regularly pressing assaults in the mountainous area to the north. Of 11 Isonzo Offensives, only two can be considered moderately successful, the Sixty, when the strategic city of Gorizia was captured and the 10th, when the line was advanced substantially compared to earlier efforts. However, the total advance after 11 costly offensives never came close to capturing Trieste, the main objective. But the Austro-Hungarian defenders were pushed to the wall and the German High-Command, sensing this, sent reinforcements in the fall of 1917 to mount a counteroffensive. That operation would be known in history as the Battle of Caporetto and would completely change the character of war on the Italian Front.

A Note on Terminology:
Caporetto is known in some sources as the 12th Battle of the Isonzo. I've found it's best to treat it as a separate entity, though. Caporetto was a German/Austrian Offensive rather than Italian, the style of operations was substantially different, and it was undeniably a decisive victory.

The White War: Life and Death on the Italian Front 1915-1919 by Mark Thompson

The Eleven Battles of the Isonza at La Grande Guerra