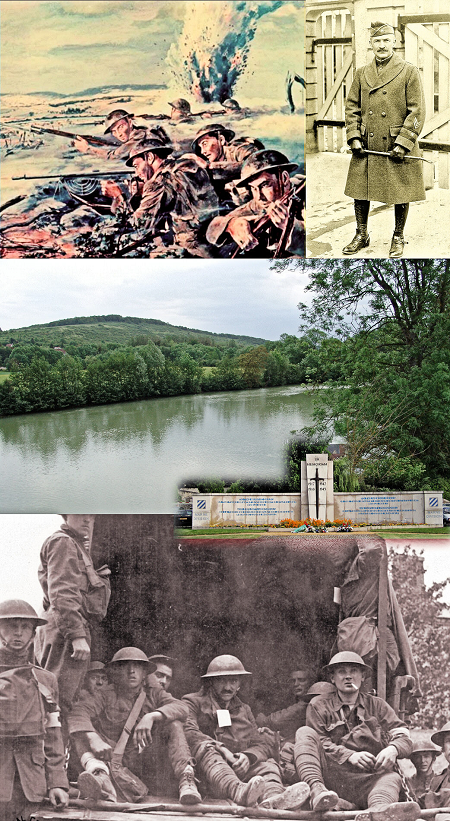 Update from the States
Virginia
The Virginia WW1CC is keeping busy. On June 22nd, the state’s Committee’s Education, Programs and Commemoration subcommittee met. The subcommittee came away from the meeting with a number of action items to include reaching out to Virginia’s universities and its Department of Education, as well as communicating the information about highway markers and working towards digitizing the list of Virginians killed in the war. The subcommittee will report to the full committee on August 31.

And how YOU CAN HELP:
This Sync Call aims to share more of these State Outreach highlights each week-- Be sure to let us know about what’s going on in your state so we can report it!

Operation Doorknock
Operation Doorknock is proceeding apace! Our interns have been working fervorously to produce and deliver letters to each member of Congress. So far they’ve hand-delivered over three-hundred letters and will deliver the remainder today. They really have been quite busy! Operation Doorknock will conclude next Tuesday with a press conference and media event on the grounds of the Capitol Building that will also kick off General McCaffrey’s, Commissioner Fountain’s, and Commissioner Moe’s visits to the Hill.

Commission Meeting: Happening Today!
The quarterly meeting of the WW1 Centennial Commission at the National WWI Museum in Kansas City is happening now as I speak! It is scheduled to go from 9am to 1130am Central time and is open to the public. You can listen in to all the excitement by dialing (712) 432-1001 and entering Access Code: 474-845-614#. We encourage you to listen in as the commissioners make decisions about our future.

Design Competition: The End is Nigh!
The deadline for round 1 submissions is NEXT Tuesday, July 21st! Time is running out if you or someone you know wants to submit! A link to the Memorial webpage and competition manual will be in the minutes.

It’s also worth reminding you that even if we get the perfect design we can’t build it without donations. We encourage everyone on this call to consider donating. Every dollar counts double thanks to the generosity of our founding sponsor, the Pritzker Military Museum and Library, which will match your donation. We will include a link in the minutes. Our veterans deserve a memorial. We can build it.

Details about the competition, as well as the competition manual can be found here. You can also help make this restoration a reality by making a donation to the Memorial Fund. Share this link on social media and on your organization's website--however you can get the word out. We cannot do this without your support. Thank you.

The Pritzker Museum and Military Library located in Chicago, Illinois would like to extend an invitation for the volunteer representatives in the Upper Midwest Region -- Illinois, Indiana, Iowa, Michigan, Minnesota, North Dakota, Ohio, Tennessee, South Dakota, and Wisconsin -- to a collaborative meeting. The purpose of this meeting is to increase contact and coordination between these states’ volunteers and to provide updates on the strides each state has made in the planning efforts for the centennial. Additional information will be announced in the near future.

How you can help the WWICC this week:

Italy in World War 1: THE GREAT WAR Special
July 13, 2015. Italy was a major European country that joined World War 1 almost a year after the assassination of Archduke Franz Ferdinand in Sarajevo. Initially, Italy actually had an alliance with Germany and Austria-Hungary called the Triple Alliance, but Italy decided to back the Entente powers instead because they were promised disputed land in the Alps and near Trieste. Find out all about Italy in World War 1 in our new special.

Adapt or Die - The Artillery Barrage: THE GREAT WAR - Week 50
July 9, 2015. The Great Retreat of the Russians during the last weeks has shown one thing: Artillery is the key to success. More specifically, a new kind of artillery tactic called the artillery barrage which focuses shelling on one part of the front. August von Mackensen had actually stolen this approach from John French. The Entente tried to use it on the Western Front a few months earlier without the expected breakthrough. 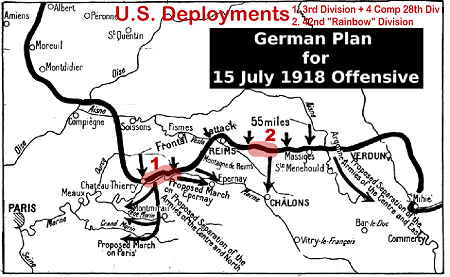 Ninety-seven years ago today the German Army launched the fifth of their "Ludendorff Offensives" on a 55-mile front between Chateau-Thierry and east of Reims. Guarding both flanks and they would play a critical role in defeating the German Offensive. After July 15th, there would be no more German offensives in World War I. American units played a critical role in defeating the offensive.

At Mezy: "The Rock of the Marne"

Along the western half of the sector this meant mounting an assault across the Marne River. The key crossing point was five miles east of Chateau-Thierry around the village of Mezy. The Sumelin River Valley (actually just a creek) provided access to the allied rear and provided the most direct route to Paris. Just behind Mezy was the opening to a valley which—if entered—would allow the attackers to penetrate the Allies' rear deeply. Defending along a five-mile front east of Chateau Thierry was the 3rd Division reinforced by a battalion of the 28th Pennsylvania Division. On either side of Mezy were two regiments of the American Third Division. Their action here on 15 July 1918 helped halt the last German offensive of World War I.

This is how an American Official History records the event:

On July 15, 1918, the 38th Infantry of the 3d Infantry Division successfully defended its position on the Paris-Metz railroad, 200 yards from the River Marne, against six German attacks. It was the last great offensive of the German Army and the first fight of the 38th Infantry in World War I. Initially, the Germans succeeded in driving a wedge 4,000 yards deep into the 38th Infantry’s front while the U.S. 30th Infantry on its left and the French 125th Division on its right withdrew under heavy pressure. With the situation desperate, the regiment stood and fought. The two flanks of the 38th Infantry moved toward the river, squeezing the German spearhead between them and exposing it to heavy shelling by the 3d Division artillery. The German Army’s offensive failed. With this brave stand the 38th Infantry and its commander, Col. (later General) Ulysses Grant McAlexander, earned its nom de guerre Rock of the Marne. General John J. Pershing declared its stand “one of the most brilliant pages in our military annals.” 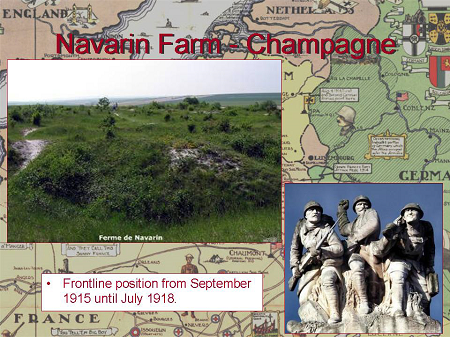 The principal French memorial in the Champagne region marks the site where French forces were stymied throughout 1915, stayed in place for three years, and waged a notable defense in the opening of the Second Battle of the Marne, July 1918.

Navarin Farm is placed on the main North-South road of the Champagne and was on the right allied flank when the German Army launched their fifth major offensive of 1915. The U.S. 42nd, “Rainbow”, Division was deployed here during that July 1918 battle. The division held the line using the "bend-don't break" tactics ordered by the French commander, Henri Gouraud. A break through at Navarin Farm would have allowed the enemy to roll up the defending forces along the Marne River line or, in the east, around Verdun, or conceivably both.

The monument contains a chapel on whose walls are plaques containing the names of the soldiers who were placed in the crypt at the request of their families. The crypt contains 10,000 unnamed soldiers along with General Gouraud, commander of the 4th French Army in 1918. The figure on the right atop the pyramidal ossuary is an American Doughboy. said to resemble Quentin Roosevelt, who was killed in the sector flying for the 95th Aero Squadron. The battlefield and trenches around the monument have remained untouched since 1918.

The successful Allied defense was followed on July 18th with a counteroffensive that threatened to cut off all the German troops in the Marne-Reims region. The next German offensive, targeted against the British Army in Flanders, had to be called off to salvage the situation. Allied Armies had gained the initiative and would remain on the offensive until the Armistice.

The effort of the 42nd Division would be folded into the main highlights of the history of what would be one of the most active American Divisions in the war. For the 3rd Division, however, the Rock of the Marne, would be its greatest tradition stemming from its service in the First World War. Today it is still known at "The Marne Division" and there is a major monument to its service at Chateau-Thierry next to the Marne River.

Michael Neiberg, The Second Battle of the Marne
Stephen Harris, The Rock of the Marne (forthcoming)