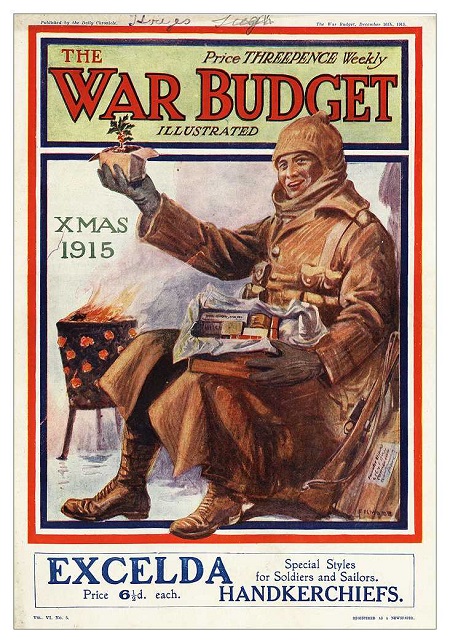 Yesterday, December 22, wrapped up the public display of the 5 finalists of the National WWI Memorial Design competition at the Wilson Building in Washington, DC. The final concepts will remain on the Commission's Stage II Design Development webpage. Read all about the concepts and examine high-definition pictures; post your comments, too.

The jury will deliberate over the winner of the design competition January 5-7 here in Washington, DC. Our formal announcement will coincide with our 10th Commission Meeting on January 25th. We will post more details on this as we get closer.

Please remember that even with the perfect design, we can’t build a memorial without donations. Every dollar donated will be matched by our founding sponsor, the Pritzker Military Museum and Library. You can make this memorial a reality by making a donation to the Memorial Fund. Our veterans deserve a memorial. We can build it.

Additionally, a C-Span interview with Commissioner Edwin Fountain on the Memorial Design Competition will air on Sunday January 3 at 9:30 pm EST (6:30pm PST) on C-SPAN 3.

The Commission continues to add former US Ambassadors to foreign countries to our Diplomatic Advisory Board. The role of the Diplomatic Advisory Board is to enhance outreach as we bring together new sponsors and partners for our commemorative activities, and to provide counsel, strategy and contacts in the countries where they served. We've added two new members to the Board:

The first meeting of the DAB will be on January 13 in Washington, DC.

Stephen Taber in Massachusetts who has been making major headway in the state, including working with the Governor’s office and MA state senators. Thank you, Stephen!

The DC State Outreach team - which is really picking up steam and growing in size.

Colonial Glory And World War 1 Reality - British Field Marshal John French : WHO DID WHAT IN WW1?Published on Dec 21, 2015. British Field Marshal John French was a soldier through and through and had a glorious career during the colonial era of the British Empire, but all the battles around the world couldn’t prepare him for modern war. His experience in the Boer Wars and in the Mahdist War made John French a rising star in the military. But when he was leading the British Army landing in Belgium in August 1914, neither he or the public were prepared for the new realities of World War 1 with huge casualties and trench warfare.

HBaseball during WW1? What Was the Role Of Bicycle Battalions? : OUT OF THE TRENCHESPublished on Dec 19, 2015. Indy sits in the Chair of Wisdom again to answer your questions about WW1. This time we are talking about Baseball and Bicycle Battalions.

Despair And Mutiny On The Italian Front : THE GREAT WAR - Week 73Published on Dec 17, 2015. The morale of the Italian Army at the Isonzo Front is on an all time low. Catastrophic defeats against the Austrians, bad and broken equipment, unsanitary conditions, no supplies, no front leave and recreation for the soldiers. This week the first troops under Luigi Cardona are mutinying. At the same time the Entente is in real trouble against Bulgaria on the Macedonian Front and the evacuation of Gallipoli is still in the planning phase.

100 Years Ago in the Great War: Christmas at the Front – One Year after the Truce 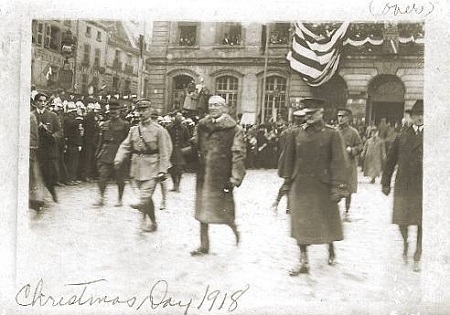 Yes, there were Christmas truces after the famous 1914 event and not just on the Western Front. Above is a photo of German and Russian soldiers celebrating the holiday season on the Eastern Front. In Italy in both 1916 and 1917, there were so many episodes of gift exchanges between Italian and Austro-Hungarian troops – chocolate or bread for tobacco, apples for religious medallions – that by 1918 the Italian Army had imposed a death sentence on fraternizers. Luckily, the war's end precluded testing that regulation.

The original truce and such similar events on other front and in later years of the war were special outgrowths of what was known as the Live and let live approach to life at the front. "Live and Let Live" describes: the tendency of soldiers to avoid unnecessary discomfort and casualties in the trenches by making unofficial rules of conduct and engagement with the enemy.

On the Western Front, there were scattered incidents in 1915 [albeit smaller in scale] one of which was near Fromelles. Lt. Wilfred Ewart of the Scots Guards described it in his memoir, Scots Guards.

What he reports is reminiscent of the events of Christmas Day 1914, with one big exception: the contact between the German and Scottish troops only lasted 10 minutes. Lt. Ewart includes this description of the abrupt conclusion:

So for ten brief – all too brief – minutes there is peace and goodwill among the trenches on Christmas Day. Then from the trenches of the Ninety-fifth Bavarian Reserve Infantry Regiment two officers in black accoutrements and shiny field-boots come out, wishing to take photographs of our Tommies, and offering them cigars. Their request is refused; and presently they say: "You will have five minutes to get back to your trenches before our artillery will open fire." And it does. And two or three men are wounded almost at once.

However, he does add: 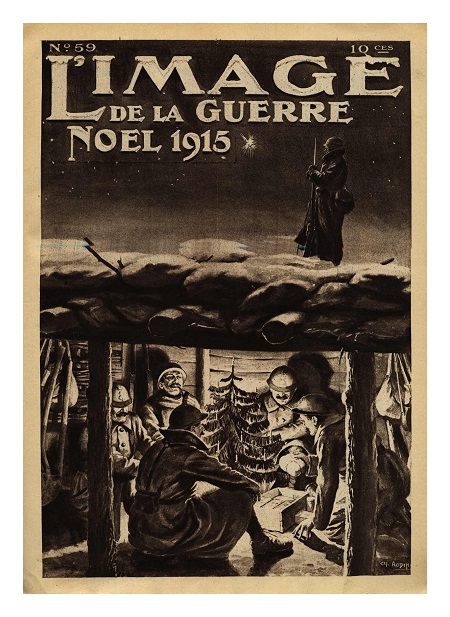 But for twenty-four hours not a shot is fired, on either side.

The Christmases of 1916 and 17 have few similar reports from the frontlines. However, the high commands made an effort to provide special food and
holiday regalia in the rear areas. Things were different for the troops. As a matter of fact most of the participants of 1914's Christmas Truce were dead or invalided out. The new armies were not the professionals or early enthusiastic volunteers of the early fighting. They were more conscious of being trapped in a death struggle of nations and were also aware of the tremendous casualty lists that had accrued.

This quote from a well-known German soldier, who managed to survive 14 wounds capture this pretty well:

Christmas and New Year were celebrated by the companies with great festivities at which beer and grog flowed in rivers. There were exactly four men left in the 2nd Company who spent the previous Christmas with me in the line before Monchy....

The 1914 Truce had one traumatic and impact – it horrified the generals and their staffs on both sides, and they worked hard subsequently at discouraging such fraternizations.

Such friendly gestures across the trenches humanized the opposition much too much. One thing that trench warfare encouraged was snipping, and events like Christmas Truce motivated the staffs to organize systematic snipping operations. This discouraged chatting about war news across no mans land, popping one's head above the parapet to inquire whether anyone was interested in exchanging cigars for pipe tobacco, or, generally, in doing anything to allow a sniper to locate you.

One episode from the post-Armistice Christmas Day is worth mentioning. That day was the only time during his stay in Europe that President Wilson visited the troops. He and Mrs. Wilson took a train to AEF General Headquarters at Chaumont. He was greeted by General Pershing, visited the troops quarters, and after a luncheon conducted a Presidential Review of the 26th Yankee Division.

Of course, the Christmas Truce of 1914 dominates almost all holiday season writings from the war. The best book on the Truce is Stanley Weintraub's Silent Night. On the Internet, Trenches on the Web has a fine compilation of accounts. The work Trench Warfare, 1914-1918: The Live And Let Live System by Tony Ashworth places the Christmas Truces in the context of the Live and Let Live system.