Starting with this week's call (March 09), we will for now on host our Sync Call on a new platform - GoToWebinar. We have exceeded the technical capacity of our previous platform and this transition will resolve many of the technical issues we have faced in recent calls.

Alabama
The Alabama WWI Committee will hold its next planning meeting on March 29. We'll provide more information on that as it's made available.

Today marks the 100th anniversary of Mexican revolutionary Pancho Villa’s raid on the town of Columbus, New Mexico, which killed eight soldiers and ten civilians. The raid was a result of Villa’s anger over US support for his rival, Venustiano Carranza, and was preceded by months of attacks on American citizens and property in northern Mexico.

Today the Columbus Historical Society is holding a memorial service to remember the citizens who were killed in the raid. The centennial activities started at 8:00am. The memorial services begin at 10:00 with guest speaker Helen Patton, granddaughter of General George Patton, singing the National Anthem, and making remarks. CAPT David Poe of the Pershing Rifles will read a message from Mrs. Sandra Pershing, step-granddaughter of General John Pershing. Patton will also read a poem her Grandfather wrote while in Mexico on the Punitive Expedition. Other activities will follow the Memorial service.

Check out the Commission website and our social media pages to learn more about the raid 100 years ago: how it galvanized the US to capture Poncho Villa in an attack that would later have profound effects on American policy and military and and our eventual entry into WWI.

The Volunteers: Americans Join World War I, 1914-1917 - Developed for secondary school teachers to use with their history, civics, literature, and social studies students, this unique and relevant curriculum highlights the important role of U.S. American volunteers in World War I, including the important work of A. Piatt Andrew and AFS. It also speaks to the future by highlighting how volunteerism is a key component of intercultural competence and global citizenship education.

Forty-Seven Days
WWICC Ex Officio Member and Member of the Historical Advisory Board, Dr. Mitch Yockelson will begin his book signing tour on March 4 here in the Washington, DC area. Mitch’s new book is on the Argonne campaign, titled Forty-Seven Days: How Pershing's Warriors Came of Age to Defeat the German Army in World War I

The National Society of Pershing Rifles National Convention and John J. Pershing Memorial Drill Meet
Chantilly, Virginia - March 10-13
More than 400 cadets and midshipmen along with Pershing Rifles alumni from throughout the country are expected to attend The John J. Pershing Memorial Drill Meet, an integral part of the annual National Convention, will be held on Saturday, March 12, at the NOVA Field House, 14810 Murdock Street, also in Chantilly.The John J. Pershing Memorial Drill Meet is free and open to the public. A highlight of the drill meet will be an exhibition performance by the famed United States Navy Drill Team, from Washington DC. In addition to performing, Navy Drill Team members will serve as drill meet judges, while a Navy Drill Team officer or senior petty officer will command the final “drill down,” which closes the competition by determining an individual national drill champion.

Joe and Sabin were at the National Press Club last week for the NPC's Newsmakers series - you can view this video here.

Col. Michael Visconage, retired USMC Colonel. Then-LtCol Mike Vis­conage deployed to Iraq during the initial months of Operation Iraqi Freedom as a field historian with the Marine Corps History Division and later served as the officer in charge of the Field History De­tachment. He returned to Iraq in 2007-08 as the command historian for the Multi-National Corps–Iraq (MNC-I). He retired from the Marine Corps Reserve in June 2012 and works in private industry in San Antonio. He is also been the driving force behind all of our volunteers and organizations getting organized in Texas.

The US Arms Industry - The Fight for Douaumont : THE GREAT WAR - Week 84
Published on Mar 3, 2016. The fierce Battle of Verdun continues but as the Germans under Crown prince Wilhelm push harder and harder, the German casualties begin to rise to the same levels as the French. The French Army is only kept alive through the sacred road which brings men to the front without a pause. One French soldier that gets captured around Verdun, is Charles De Gaulle. At the same time, on the almost forgotten Libyan Front South African cavalry saves the day like in the glorious past of the British Army.

European Socialists During WW1 - Frontline Medics : OUT OF THE TRENCHES
Published on Mar 5, 2016. Indy sits in the chair of wisdom again to answer your questions about World War 1. This time we are talking about the German parliament, the European socialist movement and frontline medics.

Austro-Hungarian Rifles of WW1 : THE GREAT WAR - Special feat. C&Rsenal
Published on Mar 7, 2016. Indy and Flo sat down for one of our live streams about historical firearms again. Othais from C&Rsenal explained the various Austro-Hungarian rifles and pistols of the First World War. Among them of course the famous Mannlicher rifles. In our next episode we will also have a look at the iconic Austro-Hungarian pistols.

Both Sides Stake All at Verdun.
A Surprise German Attack Quickly Deadlocked. 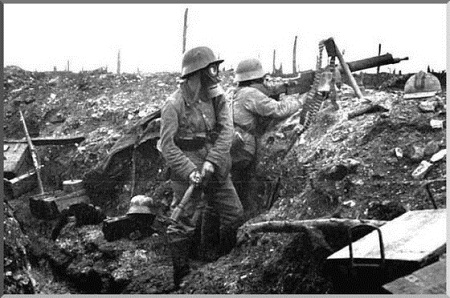 (4-7 March) The murderous battle on the Western Front for Verdun is now more than two weeks old, and the fighting is fierce. The Germans appear to have the upper hand. Their goal at Verdun is now clear. It is designed “as part of a massive effort to win the war in 1916,” writes historian Michael Neiberg.

The German command launches the offensive to seize Verdun in February “in order to forestall whatever plans the Allies had for the year ahead.” Some Allied commanders “had predicted a German attack on Verdun,” reports Neiberg, but the offensive catches the French by surprise.

Germany’s top general, Erich von Falkhenhayn, argues for a parallel action at sea – a resumption of unrestricted submarine warfare. It’s part of an effort “to pressure Britain into coming to the peace table with or without France.” Verdun is the target because, according to Neiberg, “the Germans could more easily dominate the logistical lines...than could the French.”

Neiberg writes, "Falkenhayn “hoped to bait the French into a battle on ground favorable to Germany.”

Very soon, both sides would feed “all their resources into a battle whose symbolic value became greater than its military importance”....