On Thursday, March 31, the designer of the planned national World War I Memorial, Mr. Joe Weishaar, met with the governor of his home state of Arkansas. On this occasion, not only did Mr. Weishaar present the plans and meaning of the memorial with the governor and other esteemed guests, but the governor also officially announced the creation of the World War I Centennial Commemoration Committee. 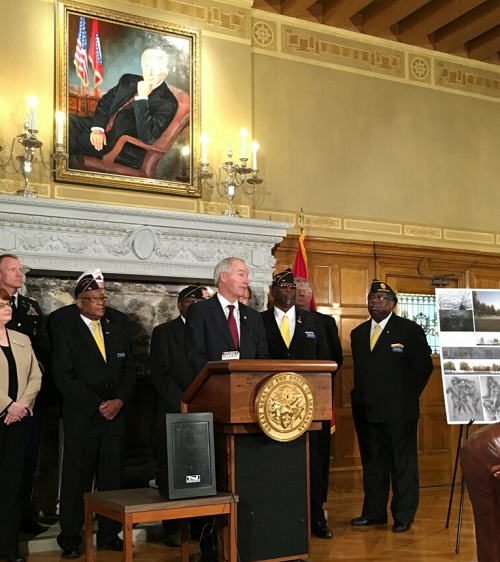 Governor Asa Hutchinson of Arkansas announces the creation of the state's official World War I Centennial Commemoration Committee on March 31, 2016.

An Arkansas native, Joe Weishaar graduated from the University of Arkansas Fay Jones School of Architecture and Design in 2013. The design that he and sculptor Sabin Howard created won an international competition for designing the national World War I Memorial. The pair titled their design “The Weight of Sacrifice.” An important aspect to the design of the project was Weishaar’s desire for the memorial to stand as a reminder that wars and veterans will not be forgotten.

The designers met with Governor Asa Hutchinson to present the design, and celebrate the 71,000 Arkansans who fought during the First World War with the creation of a centennial committee. This committee will oversee events regarding and honoring the hundredth anniversary of the First World War, which the United States entered in 1917 and saw to its end with the Armistice of November 11, 1918.

Weishaar is preparing to move to Washington D.C. soon to oversee the project, which still needs to raise much of the budgeted $45 million for construction. The hope is that funds can be raised so that construction can be completed on the memorial before the centennial of Armistice Day on November 11, 2018.

If you would like to learn more about Mr. Weishaar’s design or the team behind it, please click here.

Benjamin Desmarais is a Spring 2016 intern at the U.S. World War One Centennial Commission.