By Patrick Gregory
from www.centenarynews.com 15 April 2016 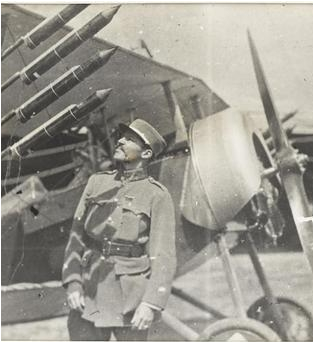 Norman Prince: founder of the Lafayette EscadrilleThe United States & France are preparing to rededicate a memorial honouring American pilots who flew in the First World War. Ahead of the ceremony at the Lafayette Escadrille Memorial near Paris, CN’s Patrick Gregory looks back at the impact of the volunteer airmen on the Allied war effort.

Although the United States had formally entered the war in April 1917 – and although American troops had seen their first combat action that autumn – it was to be nearly a full year before the pilots of the fledgling U.S. Air Service would take to the skies.

The problems the new air arm had encountered along the way were many and varied: challenges of organisation and supply, the tactical considerations of where they were to be deployed and the role they would play when they got there. As it happened, and when the time came, they were assigned the area of Toul in the north-east of France, near Nancy: a comparatively quiet sector in combat terms, where the largely untested American pilots could cut their teeth and make the transition from training school to active units. As a combat zone it would assume greater importance the longer 1918 wore on – as American troops began their ground assaults in earnest – but in that early period of spring 1918, the first of the new squadrons to be assembled used this relatively low-key atmosphere to bed in.

Read the whole story below direct from  www.centenarynews.com: