LEUVEN, Flanders, April 26, 2016 -- The U.S. World War One Centennial Commission today signed a partnership of mutual support with the Government of Flanders regarding the commemoration of the Centennial of World War I in a ceremony here. 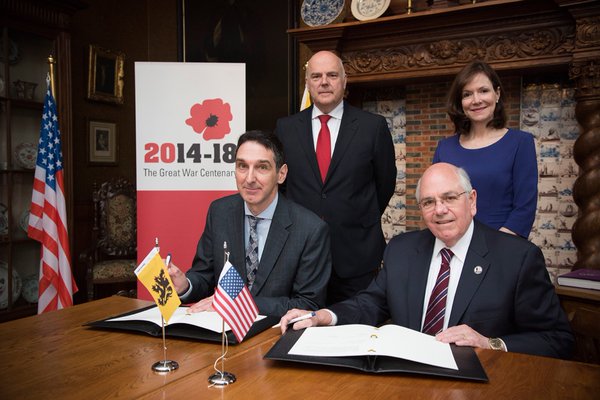 Koen Verlaeckt (left), Secretary General of the Flanders Department of Foreign Affairs, and Daniel Dayton, Executive Director of the U.S. World War 1 Centennial Commission, sign the partnership agreement of mutual support for the commemoration of the Centennial of World War I. Behind them are U.S. Ambassador to the Kingdom of Belgium Denise Bauer (right), and Danny Pieters, Vice Rector for International Policy at KU Leuven, where the signing took place. The Government of Flanders, which represents the Northern Dutch-speaking part of Belgium, has set up special programs to provide public education and commemoration for the war. Flanders, and Belgium as a whole, saw some of the greatest loss of life on the Western Front of the First World War, in particular from the three battles of Ypres.

This new agreement calls for the two organizations to share their experience, knowledge, and technical means as they prepare for the commemoration of the American intervention in World War One. Specifically, it identifies four areas for particular cooperation: 1) the identification and planning of the main events, 2) communication, digital and cultural cooperation, 3) education, and 4) remembrance tourism.

Daniel Dayton, Executive Director of the Centennial Commission, and Koen Verlaeckt, Secretary General of the Flanders Department of Foreign Affairs, signed the document in a small ceremony at the University Library of Leuven, a 15th century building which was destroyed in World War I, but was restored with American assistance.

"The challenging events of the First World War helped to forge a special bond between the people of the United States and the people of Flanders" said Secretary General Verlaeckt, "This agreement is designed to encourage our people to mutually remember, explore, and foster those strong bonds".

Executive Director Dayton echoed that sentiment "The story of World War I is multifaceted, with many important lessons for us to embrace. This agreement will help the people of Flanders, and the people of the United States, to better understand what happened one hundred years ago, and how it continues to touch our lives today."