PHILADELPHIA, PA -- Coinciding with the centenary of America’s involvement with the war, World War I and American Art at the Philadelphia Academy of the Fine Arts (PAFA) will be the first major exhibition devoted to exploring the ways in which American artists reacted to the First World War. The exhibition will run from November 04, 2016 to April 09, 2017. 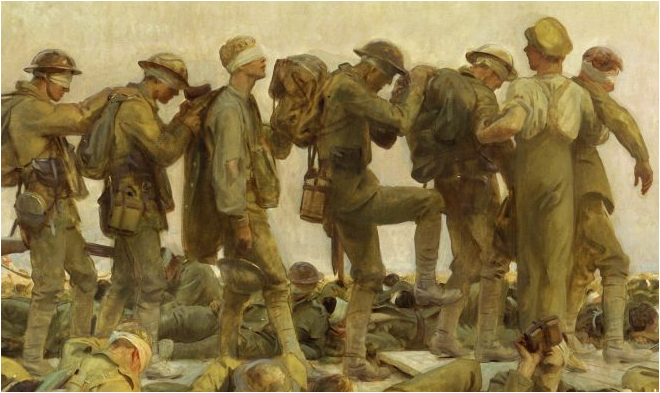 Detail from John Singer Sargent’s Gassed, to be on exhibit at PAFA.The exhibition at PAFA has been endorsed by the U.S. World War 1 Centennial Commission.

World War I and American Art seeks to revisit a critical moment in American history through the eyes of artists in order to show how they responded to what was an unprecedented global experience.

The exhibition includes numerous high-profile loans, among them, John Singer Sargent’s monumental painting, Gassed: The Dressing Station at Le Bac-de-Sud, on the Doullens-Arras Road, August 1918 (1919), from the Imperial War Museums in London. This painting, which has not been seen in the United States since 1999, was part of a commission to demonstrate British-American cooperation during the war.

Read the whole story on the PAFA web site: