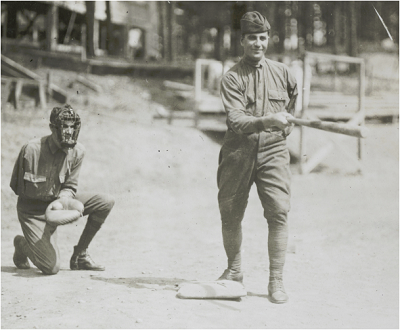 One-armed baseball game at Walter Reed Hospital during World War 1Long before Pete Gray or Jim Abbott stepped up to the plate, veterans of World War I recovering at military hospitals throughout the United States formed amputee baseball teams.

Elbert K. Fretwell, Director of Recreation in Hospitals in the Department of Military Relief with the American Red Cross, insisted that the best recreation for recovering soldiers was their traditional activities modified for everyone to be able to enjoy, and the soldiers seemed to agree. One player at Fort Des Moines exclaimed, “Gee, I’m glad I can still swat the old pill!”

The Department of Military Relief organized field days, where veterans from different hospitals competed. Fretwell wrote, “At Fort McHenry and Walter Reed, the one-armed baseball teams defeated their opponents — two-armed teams that played with one arm tied behind their backs. At Fort Des Moines Field Day, June 17, there was a hot game between the one-armed and the one-legged team.”