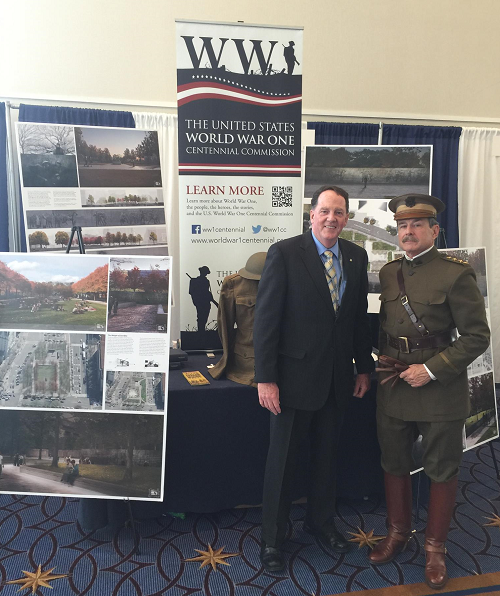 Jim Boyle (left) and "General Pershing" manning the World War 1 Centennial Commission booth at SAS 2016.The Navy-centric conference is hosted by the Navy League of the United States, and includes speeches, breakout sessions, and of course, the huge exhibit floor -- where every new naval warfare tech gadget is on display, side-by-side with examples of new military food products, 21st century uniform upgrades, and 3-D simulator demonstrations.

Nestled in with them all this year was the U.S World War I Centennial Commission exhibit booth, which told exposition attendees the story of what our Congressional Commission is doing in terms of education programs, public outreach partnerships, and the new World War I Memorial in Washington DC.

Manned by Centennial Commission volunteers and staff members, the booth was a hub for military history buffs, supporters, and people who were curious about America's involvement in the war, one hundred years ago. Visitors to the booth saw World War I artifacts on display, and picked up brochures and other literature.

This is the first year that the Centennial Commission participated in Sea/Air/Space, however the booth crew has long experience working similar national events, such as the annual conferences hosted by the Association of the U.S. Army, the Air Force Association, the American Legion, and Rolling Thunder.

The Navy League is a national association with nearly 50,000 members who advocate for a strong, credible United States Navy, United States Marine Corps, United States Coast Guard and U.S. Merchant Marine.It does this through a variety of education programs, events, and governmental outreach.