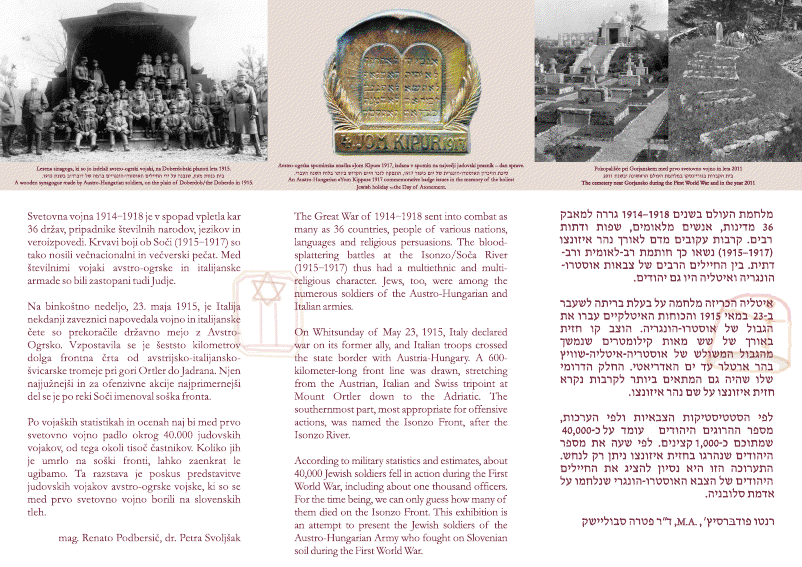 “Forgive Us, Forgive Us, Oh You, the Dead” an exhibition remembering Jewish Soldiers fallen on the Isonzo Front during the World War 1, will be open to the public through June 17 at the Embassy of Slovenia 1in Washington, DC.

The exhibition is dedicated to Jewish soldiers in the Austro-Hungarian army who fell on the Isonzo Front (Soska fronta) of WW1 in the territory of present-day Slovenia. The exhibition is based on historical research of the documents, photos and existing literature and also interviews with people who knew about Jews who fought on the side of the Austrian army in WW1.

The Slovenian Chief of the General Staff, Major-General Alojz Steiner, said the exhibition "helps understand the present and contributes to developing respect for differences". According to the exhibition, estimates put the number of Jewish soldiers who lost their lives during WWI at around 40,000. A total of around 300,000 Jewish soldiers participated in the war.

It is not clear how many fell on the Isonzo (Soca) Front, a major battle line during WWI along which hundreds of thousands of soldiers from both sides, the Austro-Hungarian and Italian, were killed.

Steiner also pointed to the multinational composition of the Austro-Hungarian army, arguing it was one of the most effective armies despite of this.

Speaking of commitment, courage, comradeship, loyalty and honour, which helped soldiers on the front endure the snow, constant attacks and smell of death, Steiner said that these values "also remain a kind of standard for the members of the Slovenian armed forces" who cooperate with soldiers from other countries at peace missions abroad.

The exhibition is provided by the Maribor synagogue, which serves as a cultural center of Jewish heritage in Slovenia. The exhibition was curated by Dr. Petra Svoljšak, Head of the Milko Kos Historical Institute of the Scientific Research Centre of the Slovenian Academy of Sciences and Arts, and Renato Podbersič, senior researcher at the SCNR (Slovenian Centre for National Reconciliation).

For operating hours and admission requirements, see below: