A Veteran's race against time to return WWI Purple Hearts 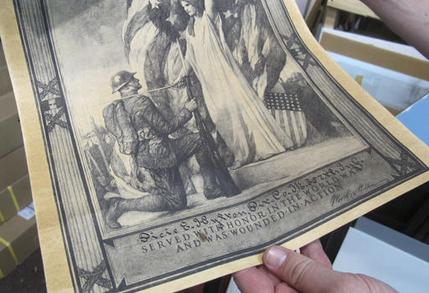 In this May 27, 2016 photo, Zachariah Fike, founder of the organization Purple Hearts Reunited, holds in St. Albans, Vt., a certificate issued to a World War I service member wounded in battle. Fike's Vermont-based non-profit group Purple Hearts Reunited is working to return 100 medals and certificates by next April, the 100th anniversary of the United States' entry into World War I. Over the years the organization has returned hundreds of lost Purple Hearts and other medals to the people who won them or their descendants. (AP Photo/Wilson Ring)By Wilson Ring
Associated Press

ST. ALBANS, Vt. (AP) -- A group that seeks to reunite lost Purple Hearts with service members or their descendants is embarking on an ambitious project: to return 100 such medals or certificates earned in World War I before the 100th anniversary next April of the United States' entry into the conflict.

Zachariah Fike, of the Vermont-based Purple Hearts Reunited, began the project after noticing he had in his collection of memorabilia a total of exactly 100 Purple Hearts or equivalent lithographs awarded for injuries or deaths from the Great War.

"You're honoring fallen heroes," said Fike, a Vermont National Guard captain wounded in Afghanistan in 2010. "These are our forefathers; these are the guys that have shed their blood or sacrificed their lives for us. Any opportunity to bring light to that is always a good thing."

The lithographs, known as a Lady Columbia Wound Certificate and showing a toga-wearing woman knighting an infantry soldier on bended knee, were what World War I military members wounded or killed while serving were awarded before the Purple Heart came into being in 1932. World War I service members who already had a lithograph became eligible for a Purple Heart at that time.

Read the whole story at the Associated Press: