On May 31st—exactly 100 years ago—the British Grand Fleet and the German High Seas Fleet met for battle in the North Sea off the coast of Denmark. Over the course of a day and a night, 250 ships (151 of them British, the other 99 German) exchanged fire and performed a complex set of maneuvers in the Battle of Jutland, World War I's first and only major naval altercation. 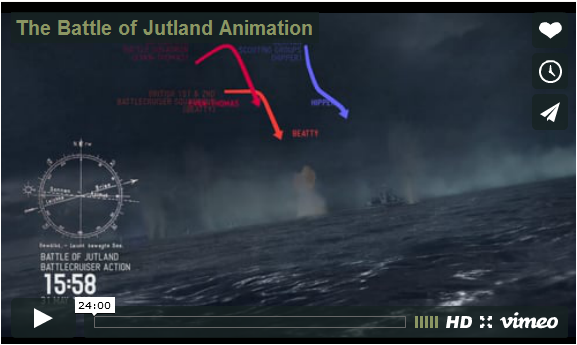 This fantastic and fantastically in-depth video narrated by Nick Jellicoe—whose grandfather was a British Admiral that fought in the battle—details every twist and turn in the clash between the navies, which contained its fair share of twists, turns, and impressive maneuvering given the limitations of the time, which included commands issued with flags and signal lamps.

Ultimately neither force was able to completely defeat its opponent, and the battle was celebrated as a victory by Germany—which did inflicted more damage to the British fleet than it absorbed, despite a smaller size—even though the conflict ultimately left the British in control of the area.