A common cause of death for the U.S. women who passed away during their World War I service was influenza or its complications (such as pneumonia or meningitis). There were some, however, who were killed: 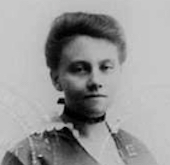 Read the entire article on American Women in World War I here: