By Dan Geringer
Staff Writer, The Philadelphia Inquirer, May 30, 2016

Some died in 1918 on a French battlefield. Some returned home to eastern Pennsylvania. But all the men of the American Expeditionary Forces' 314th Infantry, 79th Division, who fought in World War I's bloody Meuse-Argonne Offensive, are gone now. 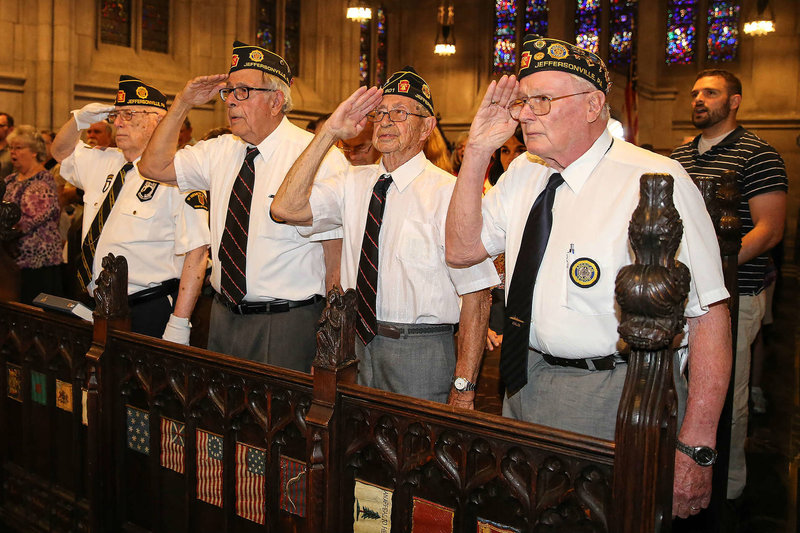 Veterans from American Legion Post No. 901 (from left) David Tomlinson, Joe Patti, Paul Candelori, and J. Robert Wagner salute during the national anthem.The memory of their courage and their sacrifice, kept alive since the Great War's end - first by the veterans themselves, then by the Descendants and Friends of the 314th - was honored Sunday at the Washington Memorial Chapel in Valley Forge National Historical Park.

"Immediately after the war, our ancestors decided on the ship home from France to start an organization to honor the 362 men from the 314th who died on the battlefield," said Nancy Schaff, the group's president. "This will be our 98th year of holding this annual service."

All of the chapel's pews were filled for the memorial program, which included a Color Guard presented by the veterans of American Legion Post No. 901 in Jeffersonville. The day included a display of 79th Division artifacts from World War I, and a talk by historian William T. Walker, whose new book, Betrayal at Little Gibraltar, focuses on the Meuse-Argonne Offensive.

Joe Patti was momentarily overcome with emotion as he remembered the many childhood years his father took him to 314th memorial services at Valley Forge. He said he marches in the Color Guard to honor his father and all the men who fought with him.