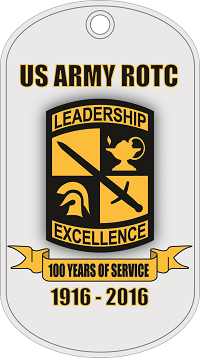 One hundred years ago, President Woodrow Wilson signed the National Defense Act of 1916 establishing the Reserve Officers’ Training Corps. Throughout the following century, the U.S. and its Army faced numerous challenges both at home and abroad. Wars against despotic foreign governments were fought and won; economic depressions endured; medical, scientific and technological advances were made; and U.S.-led peacekeeping operations contributed to greater global stability.

At U.S. Army Cadet Command, we take great pride in the role our ROTC graduates played in virtually every aspect of life during this critical time period.

Since ROTC came into existence on June 3, 1916, over 600,000 men and women have earned a commission through the program. Among them are two chairmen of the Joint Chiefs of Staff, seven Army chiefs of staff, two Cabinet secretaries and a sitting Supreme Court associate justice. Few other military commissioning sources can claim such significant lineage.

We are commemorating the 100th anniversary of ROTC in special ceremonies at the Pentagon and Fort Knox, Ky., as well as on our university campuses. Yet while 1916 is the official birthday of the program, its origins can be traced back at least a century earlier.

Read the entire article on the AUSA web site here: