By Marissa A. Cruz
Staff Writer

John Singer Sargent’s World War I painting “Gassed” will begin a U.S. tour November 4, 2016, coinciding with the centennial of America’s involvement in the war. The work will be on loan from the Imperial War Museum (IWM) in London. 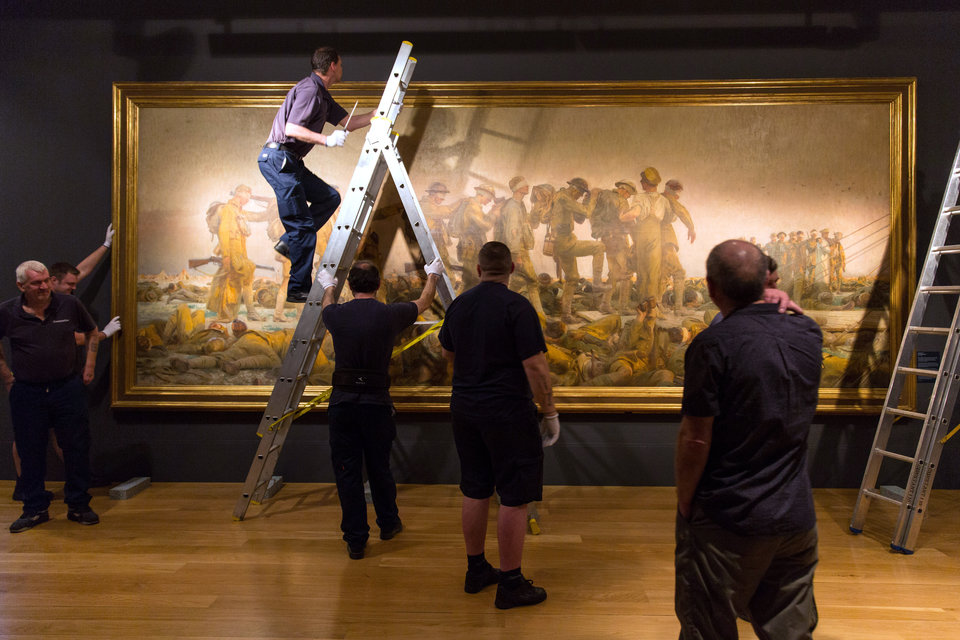 John Singer Sargent’s World War I painting “Gassed” being readied for shipment to America. (Photo by Rob Stothard via Getty Images.)“The artwork is one of the most famous in IWM’s collection, and we are delighted to be able to share it during the First World War Centenary,” said Harriet Thompson, Assistant Press Officer at the IWM.

Sargent was commissioned to contribute the central painting for the Hall of Remembrance at the IWM. He was provided the theme of British-American cooperation during the war. Sargent, an American expatriate who had relocated to London, was ideally suited to capture this theme.

When Sargent found himself unable to find suitable subject matter, he chose instead to depict the aftermath of a mustard gas attack he witnessed during a short trip to the Western Front in August 1918.

“Gassed” brings this scene to life. In the painting rows of British soldiers are led by orderlies to a dressing station, their heads wrapped in gauze to protect them from being temporarily blinded by mustard gas. Mustard gas was used as a weapon causing widespread injury and burns during WWI.

The work will begin its tour at the Pennsylvania Academy of Fine Arts (PAFA) where it will be on display as part of the upcoming exhibition World War I and American Art. This exhibit will be the first major exhibition devoted to exploring the ways in which American artists, like Sargent, reacted to the First World War.

As the PAFA explains, Sargent and his fellow artists had a leading role in chronicling the impact of WWI, crafting images that affected public opinion, supporting the U.S. government’s mobilization efforts, and helping to shape the way soldiers were remembered in its wake.

“Gassed” will be touring at the following U.S. locations:

Following these stops, the work will be on display at the National World War I Museum and Memorial in Kansas City, MO. “Gassed” has not been seen in the U.S. since 1999. It is currently in storage until it leaves for its stateside tour aboard a FedEx airplane specially designed to transport the large work of art.

Marissa A. Cruz is a volunteer at the United States World War One Centennial Commission.