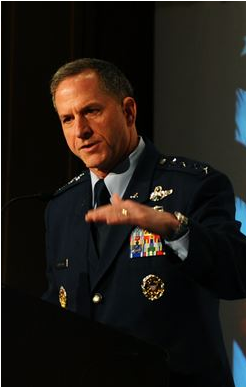 In the spring of 1916, although the United States had not yet entered the war, 38 volunteers crossed the Atlantic to Paris, promptly enlisted in the Foreign Legion, and joined Luxeuil-les-Bains airbase (Haute-Saone) where they met two French officers, Georges Thenault and Alfred de Laage de Meux, who were ready for battle. Raoul Lufbery, the Lafayette Escadrille’s Ace of Aces, shot down his first German aircraft on July 31st, 1916, in the skies above Etain, on his way to a total of 17 victories. His fellow airman Eugene Bullard was the first African American fighter pilot. He returned to the French military in 1940, after being denied admission to his national military, due to racial discrimination.

They were 20 years old, and they decided their biplanes would bear a Sioux Indian’s warrior headdress as an emblem. One hundred years later, a traditional Indian prayer resounded in the nimble air of the memorial’s park, where Mr. Jean-Marc Todeschni, the French Secretary of Veterans, and Mrs. Deborah Lee James, his American counterpart, elaborated on this 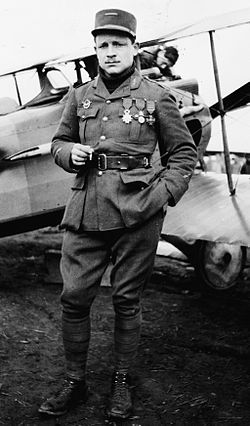 “I have used the name of Lufbery all over my pilot career,” said Gen Goldfein, “and being here today before the crypt in which Raoul Lufbery rests is comparable to a religious experience. They are the ones who taught us how to fly.” The boss of the US Air Force is the son of an Airman. Born in France, on the American airbase of Couvron, he has flown the F-16 – among other aircraft. For this ceremony, a small biplane, a Rafale, along with F-22 Raptors, the latest-generation of American heavy fighter-bombers flew over the crowd. “Technology has changed, but fundamentals remain the same,” stated Gen Goldfein.

Since World War I, which revealed the emergence of the air arm, French and American airmen have never ceased to fly side-by-side. “There are many countries in the world which claim great intentions, but a very few of them act in accordance with these intentions. Our two countries share this common characteristic of acting in compliance with their intentions,” explained Gen Goldfein. Since operations in the Balkans, but especially in Afghanistan, Libya and now in Iraq and Syria, interoperability between the two air forces is complete. “There is a factor of reliability that we share in our relationship and today, as we speak, the Americans and the French fight together. This will go on.”

Against Al-Qaeda or ISIS jihadists, air campaigns have come to be the tool of choice for the rulers. “Airpower allows the nations to project power without projecting vulnerability,” highlights Gen Goldfein. “We are able to build up coalitions within hours or within days, quicker than in the other domains – land or sea.” In this fight against armed extremists, air forces “bring an asymmetrical advantage,” being able to reach distant points very quickly, to combine firepower and “soft power” to assist the populations in case of a humanitarian relief.But working together involves a certain element of hazard. Information sharing is not always perfect. “The future of air operations will be based on our capability to build up together ‘coalition friendly’ command and control centers, integrating all the weapons, altogether.” The last word will obviously come to political vision.“When I began my fighting career in ‘Desert Storm’ [the operation to free Kuwait in 1991], the pilot prayer was: ‘God, help me to find the target.’ Today, with munitions even more precise, able to strike in daytime, in nighttime and through the weather, this prayer has become: ‘God, help me to find the right target, because I am now able to strike whatever I want.” According to this Airman, it ensures the quality shared by any of La Fayette heirs: the ability to think beyond the containment of their cockpit.