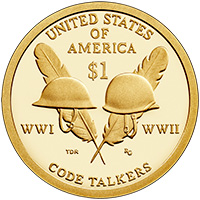 Priced at $14.95, the set consists of a tri-fold presentation folder that holds one enhanced uncirculated finish 2016 Native American $1 Coin from the United States Mint at San Francisco and one $1 Series 2013 Note from the Bureau of Engraving and Printing. A Certificate of Authenticity is printed on the package.

The reverse (tails) design of the 2016 Native American $1 Coin features two helmets and two feathers that form a "V," symbolizing victory, unity, and the important role that code takers played in World War I and World War II. It includes the inscriptions "UNITED STATES OF AMERICA," "$1," "WWI," "WWII," and "CODE TALKERS."

The coin's obverse (heads) retains the central figure of the "Sacagawea" design first produced in 2000, with the inscriptions "LIBERTY" and "IN GOD WE TRUST."