Introducing the new 2016 Summer Interns at the Commission office

The World War I Centennial Commission is pleased to present its first group of interns for the summer! Coming from different corners of the country, and the world, this group of students has been working with the Commission for the past few weeks. They each bring a wide variety of experience and creativity to our team, and we are excited to introduce them. 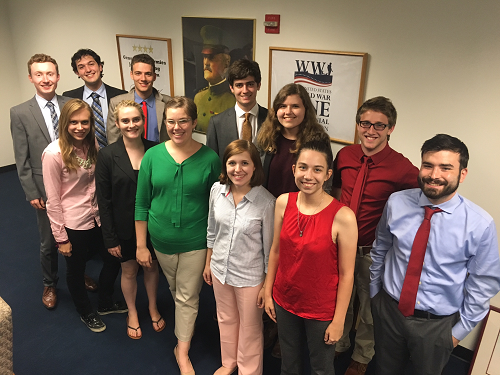 2016 Summer Interns class at the U.S. World War 1 Centennial Commission. (Back row, left to right) Kyle Parks, Adam Bieniek, James Alsberg, Jack Wood, Kate Lyons, Alessandro Burlew, Michael Parks (Front row, left to right) Sarah Pfeiff, Kara Mullin, Mackensie Henn, Sarah Biegelsen, and Elizabeth Rupert.Michael Parks is from Oradell, New Jersey and is a student at the George Washington University. He came in because he never really learned about World War I in all his years of schooling. “It seemed kind of ridiculous that 100 years after WWI, we don’t have a national memorial [in DC].”

Michael is part of the Commission’s Development division, and openly admits that while he is new to the field, he has enjoyed the experience greatly. When asked if he was surprised with the assignment, he responded, “If you told me a month ago, I’d say, ‘no way.’” However, this experience has really opened his eyes to the array of possibilities open to him after college. You can still find things you enjoy doing in an office, even at our age.”

One of our Management & Education interns, Elizabeth Rupert, wants to be a teacher after she graduates. She says, “I want my students to understand that history affects us today.” For her, it is also important to honor those who protected our freedoms, and laid down their lives for the greater good, even though the U.S. was divided on entering the war initially. A native of Charlotte, North Carolina, she admits that she came to Washington, D.C. for the summer so that she could be surrounded by history. “I want to educate people on the importance of not forgetting our history, and making sure that it’s not mere words on a page.” 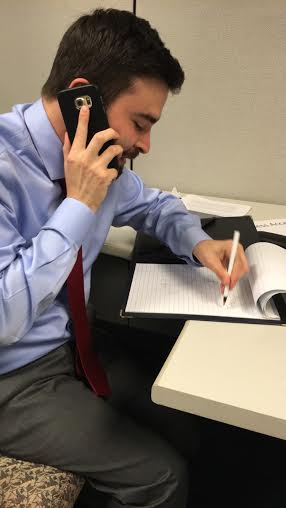 Intern Michael Parks is working with the Development team this summer.

Another intern for the Management & Education department, Sarah Biegelsen, reveals that she has a wide breadth of WWI experience already under her belt. Two summers ago, she interned for the National World War I Museum & Memorial in Kansas City, Missouri, where she had the privilege of handling archives. “Getting to handle personal documents and objects made that war more real and direct for me.” She also had the unique opportunity to visit Belgium, where she walked in trenches that had been occupied by soldiers a century ago. She even jokes, “My friend was kicking pebbles at me, and I bent over to pick one up and realized it was a piece of shrapnel left behind from the war [which was later confirmed by my tour guide]. That piece of shrapnel is my favorite souvenir from the trip.” 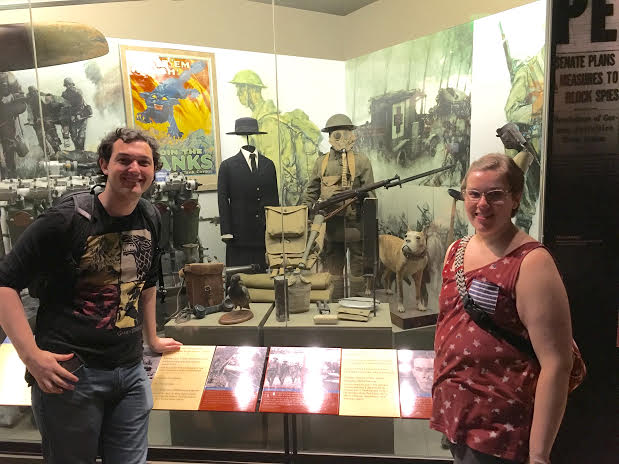 (Left) Adam Bieniek and (Right) Mackensie Henn, along with some of our other interns, visited the Smithsonian National Museum of American History to pay their respects to Cher Ami and Sgt. Stubby.At the helm of the Commission’s Veterans Outreach division is Mackensie Henn, who joined for two primary reasons. “One, I want to go into the field of public history and the Commission really dedicates a lot to educating the public. Two, as a daughter of two veterans, I never really want their sacrifices to be forgotten, or any other military family.” With this in mind, Mackensie could not be more thrilled to be in the Veterans Outreach office. “With my work on veteran outreach I’m able to reach all these organizations and say, ‘we want to be able to honor you in the future, but in order to do that we need to honor our past.”

Kyle Parks has come to spend the summer in D.C. all the way from Lurgan, Northern Ireland, as a part of the Washington Ireland Program. The program is an initiative promoting service and leadership by taking young leaders from all over Ireland, and bringing them to the U.S. Kyle has said that he is interested in history, and wants to learn more about the impact of WWI on international relations today, as well as how we can use those lessons to identify and solve problems in global politics. He looks forward to bringing an Irish perspective to the Commission. “I’m interested in how history influences the policy-making process, and being in D.C. right now is a wonderful opportunity to witness that.” Kyle is very excited to be in DC this summer, as the buzz of the city, as well as the people he has met so far, have made this journey truly extraordinary. He also added with a laugh that he also looks forward to, “eating something besides cabbage and potatoes every day.” 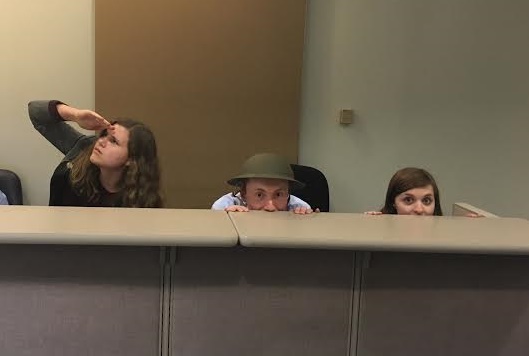 Summer Interns are in the trenches at the Commission office: (from left) Kate Lyons, Kyle Parks, and Sarah Biegelsen.In the Commission’s Development Office, intern Jack Wood has worked diligently to help coordinate the Commission’s titanic monetary operations. However, Jack has a very interesting history, seeing as he is actually nearing his 122nd birthday. “I suppose that I should give back considering all of the [war] I started.” Jack was actually born in Austria-Hungary, and lived in Sarajevo in June 1914. When asked about the assassination of Archduke Franz Ferdinand, he responded, “Remember it? I shot the [duke]!” Jack, who once went by the name of Gavrilo Princip, was a member of the organization known as the Black Hand. He took a very active part in the assassination of Archduke Franz Ferdinand on June 28th, 1914, although Jack went on, “I could have aimed a bit better.” However, Jack has done some thinking over the years, and has decided to turn his life around after being responsible for the deaths of millions of people. “It is the least I can do,” Jack stated, and then withdrew to a corner and softly wept for the next hour.

Last, but definitely not least, there’s yours truly: the two talented co-authors of this exceptional article, who are both interning for the Public Affairs department. Over the course of the summer, we will be writing many award-winning and scholarly articles, for your entertainment and education. We are both students at the George Washington University, and hope to achieve world domination after graduation. For the articles that you read in the coming months and don’t enjoy, those were all written by Michael and Jack.

In all seriousness, we are very thrilled to have this wonderful opportunity to work with such a dedicated and talented group of people for the summer. We look forward to all of the experiences that we will have, and learn from in the coming months.