There is no one way to look at history, and World War I is no exception. The war can be viewed from the trenches, the seas, the home front, or even the skies. Unfortunately, the latter is often left by the sidelines, completely obscured from modern audiences. However, thanks to the diligent work of retired Air Force Brigadier General Richard G. Head, and his willingness to work with the World War I Centennial Commission, that is about to change. 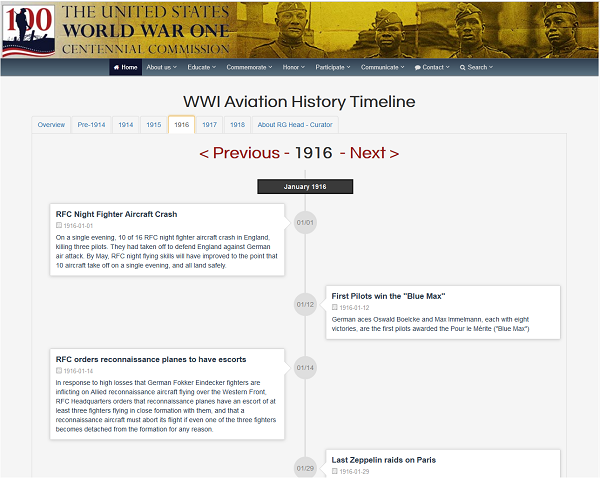 The World War I Centennial Commission is pleased to unveil an exciting new addition to the Commission’s website: A Chronology of World War I Aviation Events. Created by retired Air Force Brigadier General Richard G. Head, this timeline is a truly impressive feat of advanced research and modern technology. With over six hundred entries, this timeline illustrates year-by-year the high-flying and in depth developments in aviation as they happened throughout the war.

The war in the air is often an overlooked battlefield in the study of this conflict. The many epic tales of bravery and sacrifice in the skies are largely unknown or forgotten. Some of which include aces like Captain Eddie Rickenbacker, who scored an impressive 26 victories in the air, and Captain John Hedley, who against all odds survived falling out of his plane by being caught mid-air thanks to his pilot’s maneuvering.

These pilots fought thousands of feet above the devastated fields of France, with nothing for protection aside from their wit and training. Being in the days before parachutes, their only recourse during a crash was a pistol attached to their belts. These epic tales of incredible daring, and scores of others, are all illustrated on the timeline.

The timeline is entirely user-friendly as well. Readers can scroll through the events date by date to see major highlights of the developments in the skies. The information is presented in an easy to understand manner, and gives viewers a real sense of scale to the conflict.

This timeline comes at an opportune moment, as it will be available to the public just weeks ahead of the famous EAA Airventure Airshow in Oshkosh, Wisconsin. This coming July, viewers can enjoy and commemorate the stories of these pilots next to the planes they flew in, risking life and limb for their nations. This timeline can provide wonderful insight into the lives of these men, as well as their exploits in the skies.