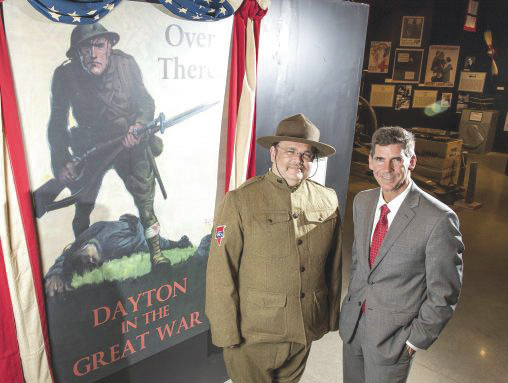 “With everything that we do, I always want to create some kind of experiential piece,” said Kress, who graduated from Wright State in 1996.

The trench is one of the unique features in “Over There: Dayton and the Great War,” a new exhibit organized by Carillon Historical Park with assistance by a Wright State history professor. The exhibit is open through November 2018.

Using diaries, letters, documents, photographs and artifacts, “Over There” showcases the essential involvement of Daytonians and local businesses in the war. Thousands enlisted and fought in Europe, businesses made unique and important contributions to the war effort, and the community emerged wealthier and larger.

“This is one of those exhibits that is the story of a city at war. We learned a lot about Dayton,” Kress said.

Dayton’s involvement in the war is greatly representative of middle America during this period, said Paul Lockhart, professor of history and the Brage Golding Distinguished Professor of Research at Wright State.

“All those things that tell the story of the United States in World War I are to be found in Dayton, and in particular Dayton contributed some genuinely unique things” to the war effort, he said. “The war made Dayton.”


Read the entire article in the Fairborn Daily Herald here: