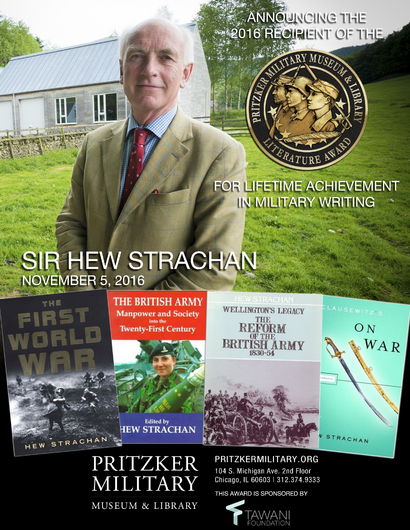 One of the world’s foremost scholars of 19th Century military history and World War One, Strachan will formally accept the award November 5 at the Museum & Library's 2016 Liberty Gala, where he will be honored for an impressive body of work dedicated to enriching the understanding of military history. Sponsored by Tawani Foundation, the Pritzker Literature Award includes a citation, medallion, and $100,000 honorarium.

Author of 14 major publications, including the first installment of his groundbreaking three-volume work on the Great War The First World War (To Arms,) Strachan is known for his incredibly detailed and carefully researched writings. His research interests center on the military history and strategic studies, with particular interest in the First World War and the history of the British Army. Strachan continuously expands the traditional narrow narrative beyond the trenches of the Western Front to consider the conflict's global implications, a method particularly resonant in our increasingly globalized society.

He has been significantly involved in the preparations for the centenary of the First World War, serving on the UK and Scotland national advisory committees and on the Comité Scientifique of the Mission du Centenaire in France. Strachan served as chair of Imperial War Museum’s academic advisory committee for its new First World War galleries and the Commonwealth War Graves Commission’s 2014-18 committee.

—Hew Strachan on becoming a military historian and writer

“As we are now in the midst of the centennial of World War One – 1914-1918 – I could think of no one more appropriate than Hew Strachan to provide a global view of a war of 100 years ago that still deeply affects the lives of all of us.”

As a respected and renowned expert in military history, Strachan serves as an advisor on contemporary military affairs in the United Kingdom. He is a member of the Chief of Defense Staff’s Strategic Advisory Panel, the Defense Academy Advisory Board and has been a specialist advisor to the Joint Parliamentary Committee on the National Security Strategy. His services to the Ministry of Defense earned him a knighthood in 2013.