Sabin Howard is the sculptor half of the partnership that is developing the design for the National World War I Memorial to be built in Washington, D.C. during the centennial period of America’s involvement in World War I.

Q: You recently visited the home of Daniel Chester French, who is known for sculpting the famous statue of Abraham Lincoln inside the Lincoln Memorial. What was that experience like? What did you take away from it? 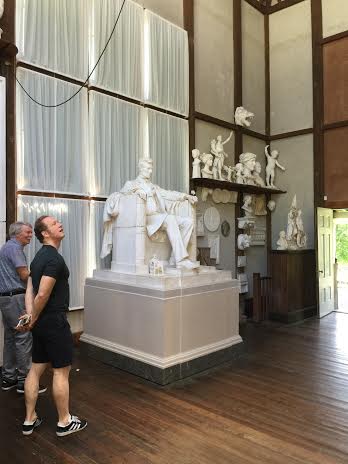 Howard says visiting French’s studio and seeing his maquettes got him excited about the next steps of the design process.“It was really interesting, because I’m not a modernist in this way of thinking, that you have to reinvent the wheel. I see it as there are a certain amount of art forms out there, one of them being classicism, so I’m playing it forward, and it’s my responsibility to play it forward. So I went to his studio and of course I had a tremendous amount of kinship looking at the plasters and [his] work. The last piece he did was, “Andromeda,” the female reclining figure, and there is such a high level of energy and you can see it in how all of the pieces are put together, thinking about two really big elements: great attention to the structure of the figure, or how the skeleton is gestured. The poses are very calculated carefully. There’s a lot of rhythm - meaning curves, which is a lot of how muscle inserts can go from an origin to an insertion. So you can see how he’s manipulating to his knowledge on the body put together, and that’s the kinship that I felt. Here’s a man 100 years ago who was doing something to serve his country using his art form, and I think that’s something that I didn’t understand until I got into this process, that drives you to a higher level artistically. It’s a kinship because I’m working the same way, translating it into sculpture and that form of translation is classical.”

Q: So how would you compare or contrast your style with French’s?

“I think it’s different style because we live in a different time. Now there’s a tremendous amount of visual input in our society. Back then the photo was just coming into effect, now it’s pervasive. So you have come up with this hyper-realism, that we’re involved with today. It’s like amping it to the next level. That’s why I’m saying I’m playing it forward. So I’m doing that same thing he’s doing, but the things that I’m seeing are amplified because of the circumstances of our culture." 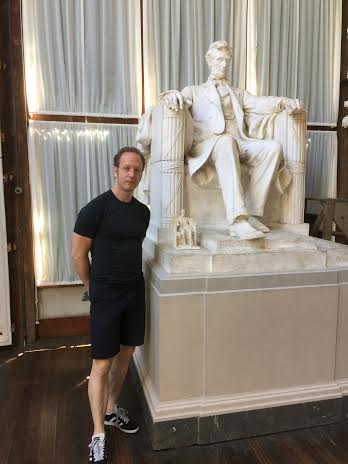 Howard stands next to a model of French’s most famous work.Q: What about this visit got you most excited about [the WWI Memorial] project?

“What got me most excited was that I’ve been drawing for a year now. I got into figurative composition because of this competition, so it brought me into a whole new realm of creativity because before I was doing single figures in the realm of sculpture. So when I went to [French’s] studio and I saw all the little maquettes that really got me fired up because that’s the next step for me after I finish doing these drawings.”

Q: What are you most looking forward to [in the project’s development]?

“Drawings are preliminary, but I’m really looking forward to doing these smaller sculptures to get the greater understanding of how the plane - when you sculpt... there are a series of lights. So planes that face the same direction are of equal value. This has given the idea that you have one source of light. In a studio it’s one source of light, it’s a triple skylight from above, there’s one source of light so it makes all the planes face the same direction of equal value. The planes that are perpendicular to that light source are the brightest of the bright. There’s a way of composing using light which is fascinating to me, that really got me excited because it reminded me of the power of sculpture. Drawing is fine, but it doesn’t have that same element of space and so carrying an energy and permeating an area. That’s really what got me excited.”

To learn more about the National World War 1 Memorial to be built at Pershing Park in Washington, DC, visit: http://www.worldwar1centennial.org/index.php/honor/national-wwi-memorial.html