A formal partnership has been established between the Experimental Aircraft Association (EAA) annual Oshkosh Airshow, also known as OSH16, and the World War One Centennial Commission (WW1CC), which serves as the official commemorative commission for this country’s recognition of the 4.7 million young men and women who served in uniform during the Great War. 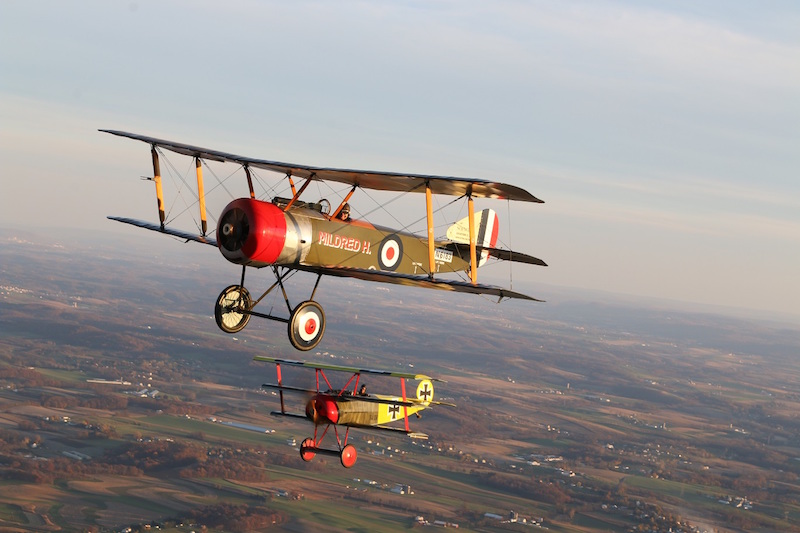 The Sopwith Scout “Pup” and Fokker DrI flying in tandem. Both aircraft will be at EAA AirVenture 2016 as part of its World War I aviation centennial. (Golden Age Air Museum photo)The partnership reflects the World War One theme that this year’s Oshkosh visitors will see at the iconic air show in late July, as well as the increase in awareness and appreciation of World War One across the country as the 100th anniversary of American mobilization approaches.

In addition to the vintage aircraft, historical re-enactors and other WW1 displays at Oshkosh, this new partnership will bring historians and authors from the WW1CC to the speaking venues throughout the air show. Attendees can visit the WW1CC camp and access educational materials, free packets of Flanders Poppy Seeds, take a WW1 helmet selfie and support the National World War One Memorial that is being designed for construction in Washington DC’s Pershing Park.

“World War I was the first time aviation attracted the interest and investment by governments as military resources, moving from individual inventors, with remarkable advancements in technology within a short period time,” said Rick Larsen, EAA’s vice president of communities and member benefits, who coordinates the features and attractions at EAA AirVenture Oshkosh. “The World War One Centennial Commission brings context and depth to our commemoration of aviation of that time, and we’re excited to have them as part of the World’s Greatest Aviation Celebration.”

WW1CC Executive Director Dan Dayton is thrilled as well. “OSH16 attracts passionate, patriotic people from all over the country and we are thrilled to partner with them as we engage the American people in the 100th anniversary of World War One.”

Roger Fisk is Director of Development at the World War One Centennial Commission.