Brigadier General R.G. Head, USAF (Ret.) is the author of “A Chronology of World War I Aviation Events,” a truly immersive and enthralling timeline of the history and development of aviation in World War I.

Q: What inspired you to produce the complete World War I aviation timeline? 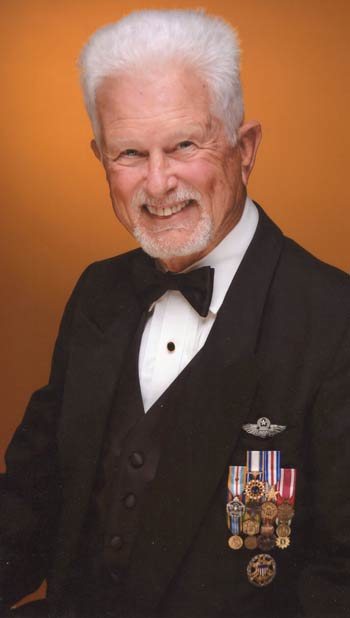 Brigadier General R.G. Head, USAF (Ret.), author of the "A Chronology of World War I Events in the Air" timelineFirst, I was educated at the US Air Force Academy, so my interest is in aviation. I was inspired to develop a chronology of aviation events in World War One by the work of the Centennial Commission and the fact that I was working on WWI research for a book at the time and had been for about four years. Four years ago I built a five-foot wingspan model of the Fokker Dr. I flown by Manfred Von Richthofen, the Red Baron, which now hangs in the Coronado, CA, Public Library. Two years ago I built a six-foot model of Oswald Boelcke’s Albatros D. II, to museum quality, and it now resides in a beautiful case in the San Diego Air & Space Museum, along with the Blue Max and others of his medals. I made several public presentations with each of these two models. After completion of the Albatros, my wife suggested putting much of the research material I had gathered on Oswald Boelcke into a book. I had previously connected with the Commander of the German Tactical Fighter Wing 31 that was named after Oswald Boelcke. I also had the assistance of a German archivist who was a member of the Boelcke Tradition Association, in Eschweiler, Germany, and he helped me gather a whole host of memorabilia and literature about this famous pilot. Finally, I was just then writing a Chronology of Oswald Boelcke’s life to include in the book, so when I got in contact with the WWI Commission, it was a natural step to volunteer to expand the Boelcke Chronology more broadly to WWI aviation events. I turned the Chronology over to the Commission, and Theo Mayer and Chris Christopher, with the brilliant work of two interns, transformed the Chronology into the Excel Timeline and made it accessible on the Internet.

One of my professional beliefs is that writers of 20th Century military history have traditionally focused on the ground or sea war and neglected the role of aviation. Maybe this is because they are not familiar with it. Regardless of the reason, once the airplane was invented, it immediately created not only the Air Combat role between opposing air forces, but the contribution to the ground or sea battle by reconnaissance or direct attack. My hope is that the Great War in the Air Timeline will provide to historians and the public some air events for their consideration.

Q: Did you learn anything new, or come across something that surprised you?

Oh yes. The most surprising feature was the set of first-hand accounts of chivalrous actions by pilots of both sides toward their opponents. This ranged from passing salutes in the air to withholding machine gun fire to landing alongside a downed opponent to see if he needed any assistance. In addition, there were frequent descriptions where downed pilots were invited to the victorious officers’ mess for coffee and conversation. The most dramatic of these gentlemanly gestures is described vividly in my book, where the Royal Flying Corps sent a lieutenant to drop a wreath on the funeral of Oswald Boelcke. Attached to the wreath was a letter with the title, “On His Majesty’s Service: To the Officers of the German Flying Corps: ... We all pay tribute to his bravery. IN COMMEMORATION OF CAPTAIN BOELCKE, OUR BRAVE AND CHIVALROUS OPPONENT.”

The second thing I learned is that there were many more Zeppelin flights and strategic airborne attacks on Britain than I had suspected. They were not all successful, but it is plain that the strategic bombing campaigns of World War II were grounded in the history of German Empire attacks on Great Britain, and the air defense measures the British took in response. The Battle of Britain in 1940 was different in type, aircraft and armaments, but it was not a new theater of war to the British, nor the Germans. 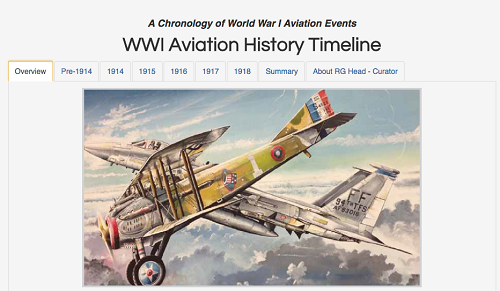 The timeline is divided by year, and has over 600 entries.A third lesson is that by tracing the events in the air war, it is possible to analyze the ebb and flow of air superiority, one of the key elements and components to victory. World War One began with no concept or mission of air superiority, but it evolved as the Germans developed the synchronized machine gun in the Fokker Eindecker, and it flowed back to the British and French when they introduced the Nieuport 11 (Bebe) and the deHavilland DH-2. That British period of superiority supported the initial months of the Battle of Somme, but the Germans won it back again with the fielding of the Albatros D. I and D. II in September 1916. That is why Oswald Boelcke is so important to the history of airpower. He not only was the top ace of all combatants in June 1916 when Max Immelmann died, but he led one of the first fighter squadrons, Jasta 2, to wrest air superiority from the British over the Somme. Boelcke was the first aviator to analyze the air war and combat tactics and write them down for others to follow. These are his famous “Dicta” that have over the years been amplified, modified and codified into air doctrine and tactics, techniques and procedures in use by all air forces today. Finally, it was Boelcke’s humble demeanor and outstanding character that provided such an example to countless generations of fliers. For all these reasons, my belief is that Oswald Boelcke is the most important aviator in history.

Q: Where did most of your research come from? What resources did you use?

There are really three major avenues of research for the Timeline. The first was the baseline of German leaders in aviation before and during the Great War. The second was the leaders and pilots of British experience with the Royal Flying Corps and its transition into the Royal Air Force. The third was the advance of technology from the Wright Brothers and early French experimentation to the rapid advances of engine power and aircraft design during the war. I admit that I did not have time to flesh out the contribution of the French Aeronautique Militaire. I did, however, add considerable numbers of events of the American Expeditionary Force and its aces.

I believe in research from original sources as much as possible, so I spent a lot of time studying letters and biographies of pilots and other leaders of the period, 1900-1919. I was assisted in this endeavor by many, many wonderful historians of the Great War in aviation. I tried to thank them all in my Acknowledgements section of the book, but I would nominate for your attention those of: Norman Franks; Peter Kilduff; Howard Fisher; Johan Ryheul; Brigadier General Mark Wells, Retired, Professor and Head, Department of History at the US Air Force Academy; Charles D. Dusch, Jr., Deputy Command Historian for the Air Force Academy; and in Germany: Heinz-Michael Raby, Gert Overhoff, Walter Waiss, and the Wing Commander of the Boelcke Wing, Colonel Stefan Steinheyer.

Q: How long did it take to compile all of this information?

The actual writing of the Timeline only took about three months, but it grew out of research I had been conducting for years, and most intensively for the past four years. 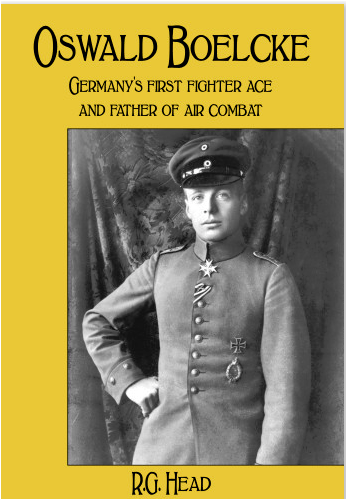 General Head's 2016 book on Oswald Boelcke.Q: Why do you think it is so important for people today to study this particular part of history?

The First World War was the climactic event of the 20th Century because it actually changed or set in motion the overwhelming majority of historic events that happened in the following eighty years. The most momentous in my mind is the End of Empire, the fall of not only the ruling families of so many countries, but the gigantic transformation in the societies of Europe. The best example is England. Great Britain became the dominant European power as a result of its victory in the Napoleonic War. The British Empire and its resulting Commonwealth were built on the legitimacy of the landed, ruling classes. The British educational, economic, social and political systems were are built on the belief among all the classes - not just the aristocrats – that the upper classes knew best, that they had the best interests of the population in mind, and they were more or less infallible. That belief system was destroyed in the trenches of Flanders and France and the spread of the War to Africa and Middle and Far East. Not only the loss of millions of men and the callous way in which they were expended, but the social leveling that occurred in the trenches, where the character of young, titled officers and working class soldiers was equally challenged – never to return to the ancien regime.

Q: Do you have any exciting projects planned for the future?

Yes, with the publication of my book, Oswald Boelcke: Germany’s First Fighter Ace and Father of Air Combat, this month, our family this year is dedicated to travel and book signings. My wife and I leave for Britain this week to join the publisher, Grub Street, in marketing the book at three airshows in England, culminating in Farnborough. Also, I have become a volunteer for the San Diego Air & Space Museum, and I’m now building an eight-foot model of the Hawker Hurricane for the Museum’s Battle of Britain display. The model is Mark I, and a replica of the one flown by a famous British ace. It is about 60 percent complete, and when ready I will conduct the same type of public presentations that I did with the Fokker and Albatros. At the same time, I am available for any publicity or other jobs I can perform for the WWI Centennial Commission.

To see the timeline, please visit the Commission’s website at  http://www.worldwar1centennial.org/index.php/educate/history/wwi-aviation-history-timeline.html#overview

World War 1 aviation history comes to life at the EAA AirVenture show in Oshkosh, Wisconsin, at the end of July., which will feature a World War I theme. Click here for more information on EAA Airventure 2016.