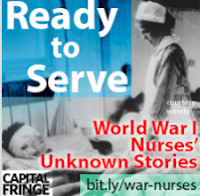 I started my storytelling career in the 1970’s, mostly telling family stories gathered by asking relatives and through genealogy research. More recently I am drawn to American women’s military history, particularly World War One stories.

In the first years after my husband was buried with military honors at Arlington National Cemetery, I spent many hours visiting his grave site, often meeting others visiting their family grave sites. While my husband and I had been coming to the cemetery together since the mid-1960’s to visit the grave site of our youngest child, visiting the site my husband now shared with her brought to focus that Arlington would one day be my “home”, too.

I channeled that reality check into a popular one-woman show - "Arlington National Cemetery: My Forever Home" – that also led me to focus on other military history programs.

I first heard about the American women switchboard operators who served in France during WWI as members of the Signal Corps, at the Women in Military Service Foundation archives (WIMSA) which is an amazing resource. 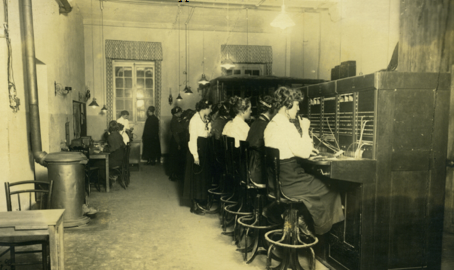 "Hello Girls" operate the switchboard in WW1Unearthing little-known history about the Hello Girls who served overseas, some near the battlefields of St. Mihiel and the Meuse-Argonne, was a classic “tap” on my storyteller shoulder, but what really got my attention was the 60-year determined fight they waged on the home front to gain their denied Veteran status when they returned from France. I felt a kinship with these under-acknowledged women who were fighting for long overdue veteran’s rights. Call it a sisterhood bond.

"The Hello Girls" is a one-woman show performed in three short acts using minimal props, and thoughtful scripting to have three of the women tell their experience of being “Over There.” and share their feelings about being told they were not veterans. It is clear that the clapping at the end of the show is for the women whose story I tell. 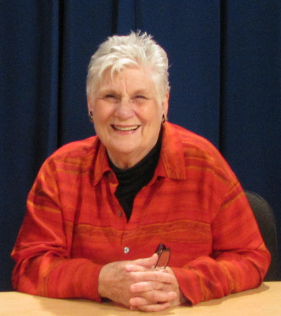 Ellouise SchoettlerThis year, I am premiering "Ready to Serve," the second in my three-show series about World War I women, at the 2016 Capital Fringe, Washington, D.C. The new story focuses on professional nurses, graduates of Johns Hopkins School of Nursing, who joined the US Army and served with Hopkins Base Hospital 18 stationed in France, 1917 – 1919.

A little known fact about me is that I’m a Hopkins Nursing School drop-out, having left school in 1955 to marry the love of my life who was, at the time, a Hopkins medical student. Now I love that I attended classes where these extraordinary nurses learned their skills, and that some were likely senior nurses walking the halls when I was a student there.

The third show is a story inspired by my great grandmother, a WWI Gold Star Mother who journeyed to France to visit her son’s grave site at the San Mihiel American Cemetery. More will be revealed as we move closer to 2018, the 100th anniversary of her son’s death. 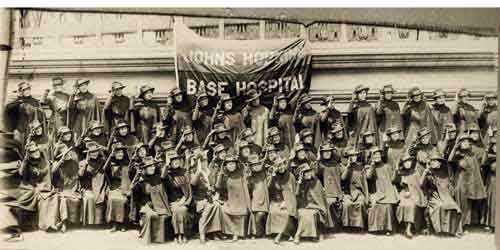 Throughout my long career as a spoken word artist, I’ve covered a lot of ground, character- and topic-wise. My storytelling intent, though, has never wavered: My goal is always to bring people to life for audiences. A tap is just a tap. The true storytelling art comes from collecting and sorting a plethora of personal details, and piecing them into rich story that resonates for the audience.

For the research starts with reading a broad range of histories before scouring for personal histories and photos. The Internet is an increasingly rich source, as more documents are digitally archived. Ancestry.com and Newspapers.com are great sources and general Google searches often find a gold mine. 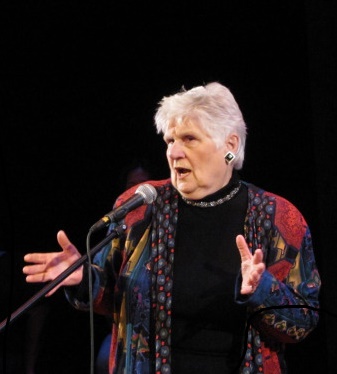 Ellouise Schoettler on stagePrimary documents are the best sources for personal history. For "The Hello Girls," I studied personal affidavits collected to support the 1977 Congressional Bill that awarded their veteran status. For "Ready to Serve," I combed personal letters in the Nurses Alumni Journals, files, and informal histories written for Hopkins – all at Chesney Archives, Hopkins University, in Baltimore. Discovering a cache of letters from one of the nurses at the Library of Congress was like finding treasure of personal experiences. Because censorship was so tight they did not write directly about specific battles, which was fine with me as I was not looking to write a history narrative.

The letters did describe patient situations and injuries as well as the challenges in taking care of shattering battlefield wounds. The letters also gave an insiders view of the difficulties of everyday life for these women from the intense winters of 1917 and 1918 to their exhaustion during times of heavy battles where there was barely room to take care of all the patients and not time to sleep. During it all their primary concern was “taking care of our boys.”

Last summer I visited the grave of a Hopkins nurse in her South Carolina home town and felt disappointed and sad that there was no recognition of her service and no one seemed to know her story. That is not unusual for women and strengthens my desire to focus on discovering and telling stories of little-known women.

Maryland performer Ellouise Schoettler is a nationally-known spoken word artist who tells original stories featuring little-known women. Her latest one-woman shows have premiered at the Capital Fringe in Washington, DC. She is proud to have told The Hello Girls at the National World War One Museum and Memorial, Kansas City, MO and delighted to be performing "Ready to Serve" at the Annual Alumni Meeting, Johns Hopkins School of Nursing, Baltimore, MD in September 2016, following the Premiere Performances at the 2016 Capital Fringe. For more information about Ellouise, visit ellouiseschoettler.com. For more information about "Ready to Serve", visit http://bit.ly/war-nurses or on Facebook at Facebook.com/FleshOnOldBone. Follow Ellouise on Twitter.com/ellouisestory.