By Lora Whelan
The Quoddy Tides

EASTPORT, ME -- The Passamaquoddy Tribe sent 25 men to fight in World War I, some of whom served in the Yankee Division Company I, says Tribal Historic Preservation Officer Donald Soctomah. However, because the Passamaquoddy were not considered United States citizens until 1924, the Company I veterans who were wounded or died in action never received recognition for their service. On Sunday, July 17, that changed. 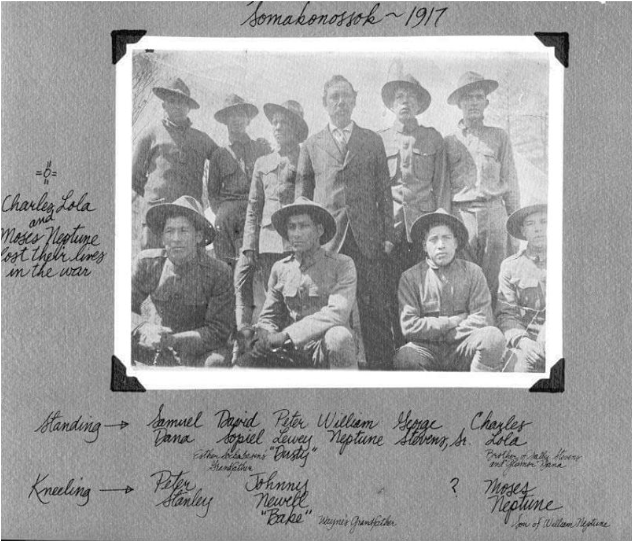 The “Honoring Ceremony for Six World War 1 Veterans” took place during the Indian Day Ceremonies held in front of the Indian Township Tribal Office. Ceremonies began at noon with the Grand entry of the veterans and the tribal chief, vice chief, tribal council and dancers. The Indian Township Tribal Government and the Smithsonian Film Network partnered to recognize six Passamaquoddy World War 1 veterans who were wounded or died in the War with a Silver Star Medal from the U.S. Government to the veterans' families.

After the military presentation, Chief Nicholas of the Passamaquoddy Tribe presented one painted eagle feather, one of the highest honors a tribal member can receive, to each veteran's family.

Soctomah was approached by the film division of the Smithsonian Institution about the company. While involved in research on an upcoming film, the organization found that a number of Company I recruits came out of the Eastport area. "A lot of Company I members were made up of Passamaquoddy," he says. "They [Smithsonian] wanted to interview family members about their veteran forebears." Three family members of three veterans were found: Genevieve Neptune, John Stevens and John Sockbeson, who are being interviewed by the Smithsonian about their WWI veteran relatives.

The veterans being honored posthumously are:

Soctomah notes that one of the factors that led the Smithsonian crew to the Passamaquoddy were caves in France within rock quarries where Company I and others were stationed during battle. Inscriptions on the cave walls told a larger untold story of Passamaquoddy involvement that will be highlighted in the film.

On July 17 they were given their country's long-due recognition.