Les Américains – Seven U.S. citizens who volunteered to fight for France in WW1 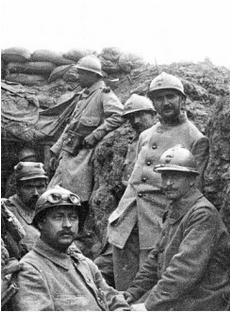 In August, 1914, a small, but committed, group of Americans offered their services to the French army. General Alexander von Kluck’s German troops were then advancing through Belgium and set to descend on Paris. Many of the Americans had lived in the city before the war: aspiring writers, poets, and painters mostly. To a man they felt a strong sense of obligation to help defend France in her hour of greatest need.

However, there were others who booked passage on trans-Atlantic steamers to reach the war. These Americans were motivated by an historical and ideological understanding of America’s responsibilities in the coming struggle – in this, they were far ahead of most of their countrymen. The French Foreign Legion provided a vehicle for the Americans to join the fight without renouncing their U.S. citizenship. Even then la Légion enjoyed a certain dark mystique. The volunteers would eventually see combat in some of the bloodiest battles of World War One in Artios and Champagne in 1915; at Verdun and the Somme in 1916; and also in the skies with the Lafayette Escadrille.

Of these remarkable men that formed the American vanguard in the Great War, seven in particular stand out.