INDIAN TOWNSHIP, ME — Ninety-nine years after six young men volunteered to fight the Imperial German Army in World War I, their families on Sunday received the official recognition that the soldiers never did. 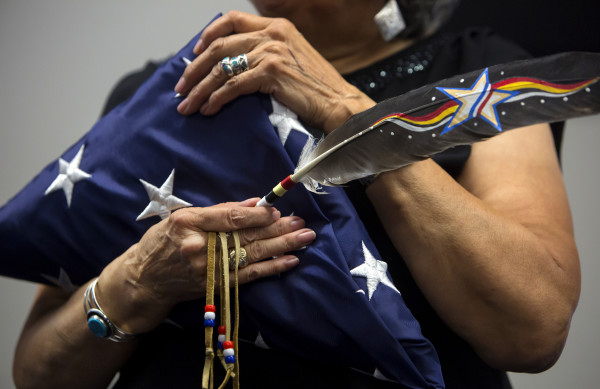 Sylvia Polchies holds an American Eagle feather and a folded American flag that she received on behalf of her late father, Henry Sockbeson, during a ceremony to honor six members of the Passamaquoddy Tribe who fought in World War I on Sunday in Indian Township. (BDN photo)

One of them, Charles Lola, was 22 years old when he was killed in the conflict. He later posthumously was awarded the Croix de Guerre medal by the French government for his valor in battle.

Moses Neptune, son of the tribe’s governor at the time, William Neptune, enlisted at the age of 19 and was killed the following year, one of the final soldiers cut down before the Armistice was signed in November 1918.

Samuel J. Dana did not lose his life in the war, but he did lose a leg. Dana, who later would serve as the tribe’s representative to the Maine Legislature, survived his wounds and returned home to the Passamaquoddy lands in eastern Washington County, as did George Stevens Sr., Henry Sockbeson and David Sopiel.

Despite their sacrifices, none of the men received any official recognition or honor during their lifetimes from the country that they served as members of the Army’s 103rd Infantry Regiment. Like all members of Indian tribes nationwide, they were not even considered U.S. citizens until 1924.

On Sunday, amid performances of traditional Passamaquoddy songs and dances, each man’s legacy got what was long overdue. More than 300 people were estimated to have attended the ceremony at the tribe’s community center.

Read the entire article in the Bangor Daily News here: