On July 14th, the National Park Service hosted a walking tour of Pershing Park led by Park Ranger Joseph Mohr titled, “World War I, Blackjack Pershing, and American Diplomacy.” This site will be the future home of the National Memorial to World War I in Washington, D.C., making it the ideal setting to discuss how the world is still influenced by the lasting effects of World War I. In order to understand the present, it is important to remember and honor the past. This is precisely what the National Park Service managed to do in the span of forty-five minutes. 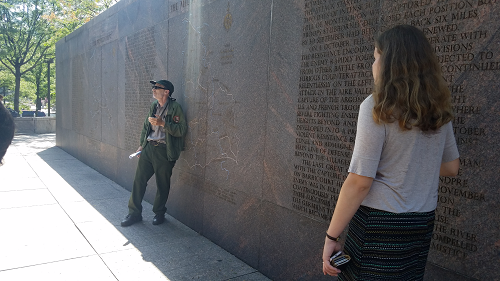 The talk was an in-depth and engaging discussion about the circumstances and events that surrounded the outbreak of World War I in 1914. By covering topics such as the rise of Germany and the decisions of various nations in the early days of the conflict, Mr. Mohr was able to bring a tremendous amount of context to America’s forgotten war. "The memorial reminds us of who we were,” stated Mr. Mohr. “There were a lot of diplomatic decisions made, and we are still living with the legacy and consequences of those today." Mr. Mohr displayed his incredible knowledge about American history by drawing from the research of several well-known academics of World War I history, such as Forty-Seven Days by Mitchell Yockelson and the works of Margaret MacMillan. 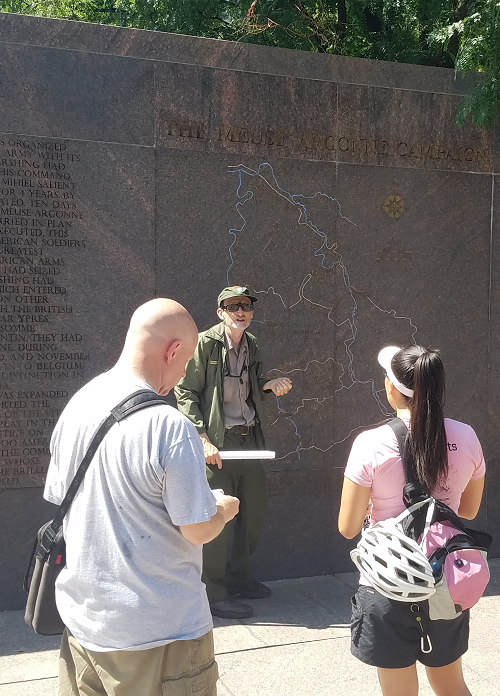 NPS Ranger Joseph MohrThis talk also brought to light one of the most important American military officers of the 20th Century. General John “Blackjack” Pershing and his leadership of the American Expeditionary Force from 1917 to 1919 is legendary, with a legacy that is still felt in today’s American society. Under his watch, other legends such as General George Patton and Chief of Staff George C. Marshall were trained on the fields of France. It has been said that there were no bad American generals in World War II, and that can largely be attributed to General Pershing’s great eye for talent, and his incredible ability to fire people. Without the ingenuity and daring of these officers, trained in the crucible of fire of the Western Front, who knows what the world would have been like today.

All the while, the group followed Mr. Mohr around the park as he brought history to life, while taking in the beautifully warm summer air. The talk was well attended and listeners were eager to ask questions after the talk’s conclusion. Under the stern gaze of General Pershing, Mohr regaled the crowd with several stories of the General’s remarkable exploits, as well as those of the men who served under him.

As the centennial period of American involvement in World War I draws nearer, it is important to make sure that the memories of those who served are never forgotten. The National Memorial in Washington D.C. is scheduled to break ground in May 2017 and will be completed by November of 2018, roughly the span of time that the American Expeditionary Force was deployed on the Western Front. The effort to build a national memorial to recognize their sacrifices in our nation’s capital is just starting, but even before construction begins it is important that we honor their stories in other ways.

Visit the World War I Centennial Commission’s website at www.worldwar1centennial.org for a series of educational videos, resources, and other tools on World War I. To learn more about the National Park Service (which is also celebrating its centennial), visit its website at www.nps.gov.