World War I: Time to Recall What This War Was About

By Gayle Osterberg
Director of Communications, Library of Congress 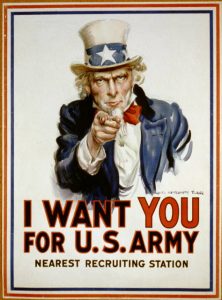 Next April begins the centennial of America’s involvement in World War I, from April 6, 1917, when the U.S. Congress formally declared war on the German Empire. It concluded November 11, 1918, with the armistice agreement.

I am going to risk embarrassment by confessing that I have retained very little of what I learned about this war in school. I must have been taught all the basic information – how it started, why we were involved, what its legacies were. But unlike the Civil War and World War II, there is little I can discuss in an informed way about the 19 months America was engaged in this global conflict.

I am told by Library colleagues that this is not unusual. In the United States, what was known as “The Great War” over time has been less widely studied, written about and dramatized on screen than other conflicts.

But consider that during those 19 months, more than 1 million women joined the workforce and momentum built for suffrage; nearly 400,000 African-Americans volunteered and served overseas, along the way popularizing jazz in Europe; the U.S. transitioned from being a debtor nation to a creditor nation, for the first time establishing America as a global power; and the global mobilization and conditions of warfare led to the spread of influenza; between 1918 and 1919, Spanish Influenza, as it was known, killed more people than the war itself.