One hundred years ago, on July 30th, 1916, New York City was rocked by one of the largest explosions in history. On this night, two million pounds of explosives ignited simultaneously, reducing the great munitions depot on Black Tom Island to rubble. The horrors of World War I had arrived in the United States before the country would officially enter the War. Even worse, the nation would not realize for another twenty-three years that the explosions were an act of terrorism carried out by foreign enemies on U.S. soil. 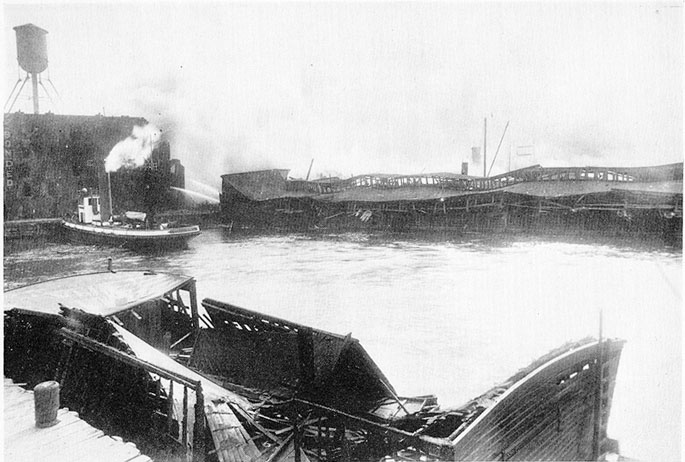 The aftermath of the attack. The first explosions were aboard Johnson Barge 17. By the end of the night, two million pounds of explosives would reduce Black Tom Island to practically nothing. Two years prior to this explosive act of terrorism, President Woodrow Wilson delivered a declaration of neutrality to Congress on August 4, 1914. He reassured Americans that, “The United States must be neutral in fact, as well as in name, during these days that are to try men’s souls. We must be impartial in thought, as well as action.” The War that had recently broken out in Europe was a world away, far out of range of posing an immediate threat to the United States. However due to the United States’ large and growing immigrant population, the conflict that was spreading across Europe posed a threat to peace, and risked causing tensions among different nationalities that had immigrated to the U.S. While the nations in Europe battled each other into submission, the United States sat by patiently and securely, washing its hands of the carnage that had torn the world in two.

In spite of its policy of isolationism in the early years of the War, the United States did not avoid the War entirely. War can actually be very profitable for neutral nations, especially if these nations sell munitions. This is how the U.S. economy was able to skyrocket as more and more American arms found their way into Allied hands. Though not all sides profited from U.S. neutrality, the United States officially traded with both sides afterall. However, the British blockade, which lasted from 1914 through 1919, prevented American goods from reaching German ports. This meant that the Allies got a disproportionate amount of American trade. In the first two years of the War, American trade with England and France expanded by nearly three hundred percent, while commerce with Germany fell to just ten percent of what it had been. Despite its successes on the front lines, Germany recognized that this imbalance could be their undoing. This realization would eventually be the start of unrestricted submarine warfare in February 1917, but before that Germany would try a much more covert approach. If they could not have American trade, then no one should either.

Black Tom Island was an obvious target. As a major depot, railroad hub, and shipping port, a good portion of American arms flowed through the small island. Thanks to the efforts of Count Johann von Bernstoff, Imperial German ambassador to Washington, D.C., Germany had a considerable network of spies within the United States by 1914. Von Bernstoff’s orders were to aid Germany in the War at whatever cost. Black Tom Island was a huge opportunity for Von Bernstoff’s saboteurs.

In the early morning hours of Sunday, July 30th, barges packed with over two million pounds of TNT and other munitions were in their berths, just waiting to be shipped overseas. With only eight guards on duty on the pier, Imperial German agents carrying pencil bombs and dynamite were able to sneak in and light a series of fires across the facility at once. Pier guards realized the danger of the situation and ran. These fires began to set off shrapnel shells on the pier, adding to the chaos. Then, at 2:08 a.m., the entire pier ignited as every munition in storage exploded at once. 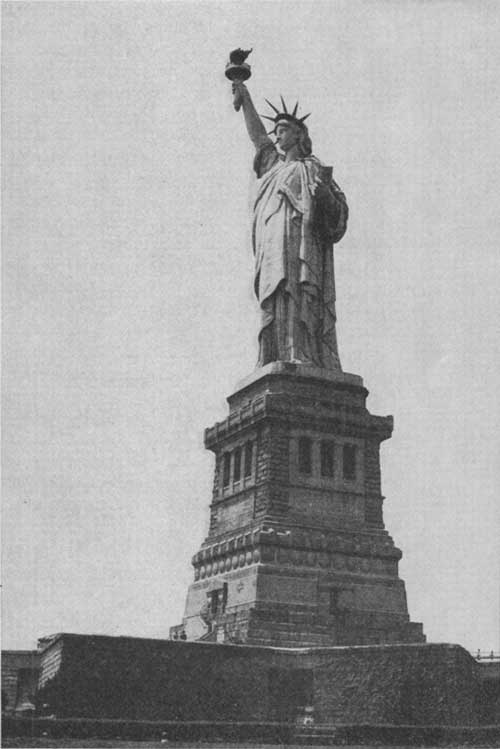 The Statue of Liberty suffered severe damages as a result of the explosions.Two million pounds of TNT blew. The blast was huge. It virtually wiped the island off the map. It broke windows 25 miles away. It awakened people in Maryland. It was so large, that it measured 5.5 on the Richter Scale. The Statue of Liberty was permanently damaged -- afterward, visitors were forbidden from climbing into the Torch. Seven people perished in the explosion, and over $20 million in damages resulted.

American authorities charged into the breach, ready to find out exactly what had happened. Unfortunately, this meant that every investigative service wanted to take the lead on the investigation. No jurisdiction apparatus had been established to cover such an event, so local police, state police, railroad investigators, and New York police fought bitterly for control. This was before the official establishment of the Federal Bureau of Investigation (then just the Bureau of Investigation) as the highest interstate investigative service. No one wanted to believe, nor could anyone fathom, that Germany could attack the United States on its own turf. Even President Wilson was reluctant to point fingers at Germany for the incident.

As a result of this inter-agency conflict, no conclusive results were brought forward either way. The only viable suspect was Michael Kristoff, a Slovak immigrant to the United States and former employee of the Tidewell Oil Company. Despite a suspected connection to the explosions, police were forced to release Kristoff for lack of evidence. During his time in police custody, Kristoff told them that he had been paid off by German agents to carry out the attack. The police thought this was nonsense and did not believe him. Kristoff later disappeared in the spring of 1917, but later died in a Staten Island hospital in 1928. It was not until 1939 that Germany was officially charged for the attacks by the German-American Mixed Claims Commission. Germany would pay $50 million for the damages in 1979, sixty three years after the blast.

The Black Tom explosions had other lasting impacts throughout the 20th century. During World War II, President Franklin D. Roosevelt told Assistant Secretary of War John J. McCloy, “We don’t want any more Black Toms,” as an attempt to justify the internment of Japanese-Americans. The mishandled investigation following the explosions also helped to improve American law enforcement organizations by setting the precedent for federal jurisdiction in handling interstate investigations and counterintelligence.

Though the only physical remnants of this great tragedy are a brief informational sign and few relics of the old pier at Liberty State Park, its effects are still present today. It was one of the crucial moments in U.S. history that proved isolationism was failing as a policy to keep Americans safe. Whether by the Zimmerman Telegram or attacks on American industry, Germany was determined to cripple the United States by any means necessary, whether they were in the War or not. This determination would prove to be their undoing as the United States would finally enter the War in 1917. One of Germany’s own countermeasures to keep the United States weak backfired against them, and in the end it would cost them the War.