Women Writers of World War I: an interview with Margaret R. Higonnet

The World War I Bridges web site recently published an interview with Margaret R. Higonnet, professor of English and Comparative Literature at University of Connecticut, Storrs, on the roles and accomplishments of women writers in World War 1. The starting point for the interview was Lines of Fire: Women Writers of World War I, a very rich book Higonnet published in 1999.

Q: What was your main purpose when you started writing Lines of Fire. Women Writers of World War I?

A (MRH): When I decided to edit a collection of women’s texts about World War I, I was motivated in good part by my desire to write about some of these works and share their power. In order to reach my audience, I needed to make a group of those texts available. 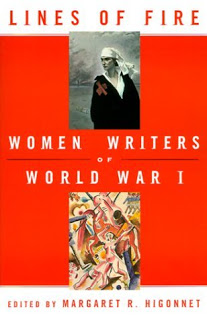 While certain major authors such as Virginia Woolf and Vera Brittain in England, or Edith Wharton, Willa Cather, and Katherine Anne Porter in America were readily available, even famous authors such as Colette or Anna Akhmatova were harder for an Anglophone audience to track down. At the time, little work had been done to reprint women’s writings about the Great War. Among feminist critics, Jane Marcus, Claire Tylee, and Nosheen Khan had focused on English and American writers.

As a comparatist, I was eager to bring to light those who wrote in other languages. While I wanted to include better known writers, I also was eager to include new names. Luckily, I could use the old card catalogue at Harvard’s Widener library, and call up books from the deposit library that had not been read for decades--not since they were first bought by librarians or donated by Harvard alumni in the years following the war. One of my favorite finds was a small selection of wartime issues from Anna Kuliscioff’s La difesa delle lavoratrici, which was lying on metal shelving in Harvard’s Littauer library. It was the only copy mentioned in the Library of Congress World Cat bibliography. Articles had been snipped out, perhaps even before the paper was acquired by Harvard. There I found the typical mix of material published in a women’s journal: political articles and poems, as well as advertisements.

Part of my interest in the project arose from the question, “What is a war text?” When Jean Norton Cru wrote his famous overview, Témoins (1929), which weighed the veracity of war memoirs and fiction, it never occurred to him that women might have anything to say about the matter. “War” meant “combat.” The underlying issue was whether a civilian population (whether female or male, adult or child) encountering war right on their doorstep might have “authentic” (and significant) experiences to recount. Should the record of a “total” war include the dramatic changes in women’s labor that had been precipitated, whether on farms, in factories, or in medical units on hospital trains? As it happens, the Great War was marked by the institutionalization of women soldiers on the Eastern Front, but their record had been largely forgotten, since the Russian Revolution and postwar political upheavals had refocused attention on other historical events.


Read the entire article on the World War I Bridges web site here: