World War I: When Wurst Came to Worst 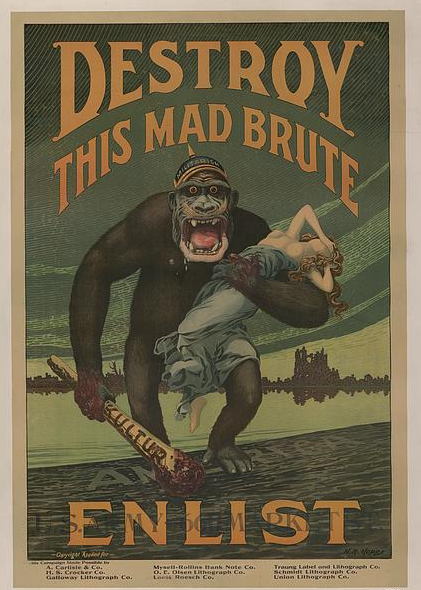 In the United States, a century ago, there were more than 8 million citizens of German origin or with German ancestry – the largest single group among those of foreign birth or ancestry, but still less than 10 percent of the total U.S. population of over 102 million. Like other immigrant groups, they were scattered all over the country, with concentrations in many big cities, and like other immigrant groups, they “had their ups and downs” as they interacted with neighbors of different backgrounds.

One of the bigger “downs” followed the opening of World War I (the art of that war is the subject of a current Library of Congress exhibition). It was a German war of aggression, and much U.S. public sentiment turned against Germany and Germans, even as then-President Woodrow Wilson tried to keep the U.S. out of the war.

This reached a fever pitch with the German U-boat sinking of the British luxury liner “Lusitania,” causing the loss of 1,198 lives including those of 123 Americans. The public – both in England and the U.S. – was shocked that the German war machine would torpedo a passenger ship rather than sticking to warships or merchant-marine vessels.

When that sentiment turned, and particularly after the U.S. got into WWI, it suddenly became difficult to be German. Schools stopped offering classes in the language, once common. Music by German composers such as Mendelssohn and Wagner ceased to be performed. Many Americans with German surnames anglicized them. There were even efforts to rename foods of German origin – sauerkraut became “liberty cabbage,” for example.