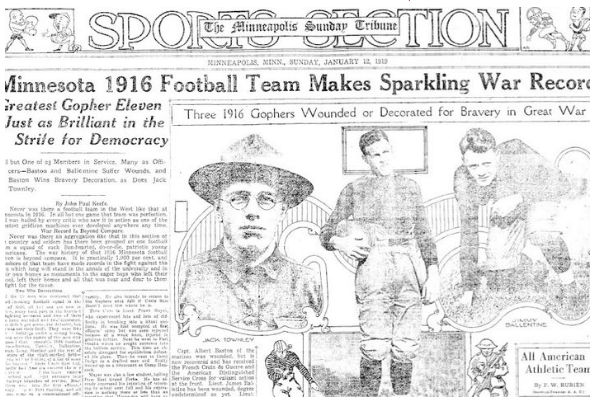 I have been blogging about sports history for almost 2 years now. As a graduate of the University of Minnesota I tend to focus on my alma mater. The Golden Gophers have a storied past that I usually try to connect to some current events.

I wanted this year's 4th of July post to reflect something related to the centenary of WWI but hadn't yet heard this amazing story of the entire 1916 U of M football team enlisting.

My day job is working in the Collections Department for the Minnesota Historical Society which makes these blog posts both fun and part of my weekly duties. I originally found out about the 1916 Gophers from a contemporary newspaper article.

Along with the teams football success that year they also ended up serving with distinction at the front. 24 individuals from the 1916 University of Minnesota football team went on to participate in World War I.

What makes this so interesting is that the team all went it's own way during the war. Some joined the Navy, others the Calvary, one even drove an ambulance and was in a hot air balloon unit. All but one came home, some decorated heroes, and 6 resumed playing football at Minnesota.

I am currently doing more research on the 24 players from the 1916 Minnesota football team who went to war. As of right now I don't know if this research will end up as a book or a long article, but I'm very excited to see where this research takes me.

You can read my original post about the Gophers going to war on thedailygopher.com web site.