The Restoration of a Legend: Rebuilding the M1917

As the last hooves of mighty warhorses fell silent on the Western Front, the roar of treads quickly replaced them. Landships stormed across the fields of France, striking fear into the hearts of all who opposed them. These behemoths were the terror of the Western Front, and their explosive entrance onto the world stage during World War I would change the nature of warfare for a century. However, these original vanguards of armored warfare have not been treated with the respect that they deserve. Many of them fell into disrepair or were scrapped, making tanks from World War I a rarity. However, thanks to the efforts of three incredible historians, one of these fantastic feats of engineering will run again in all its former glory. 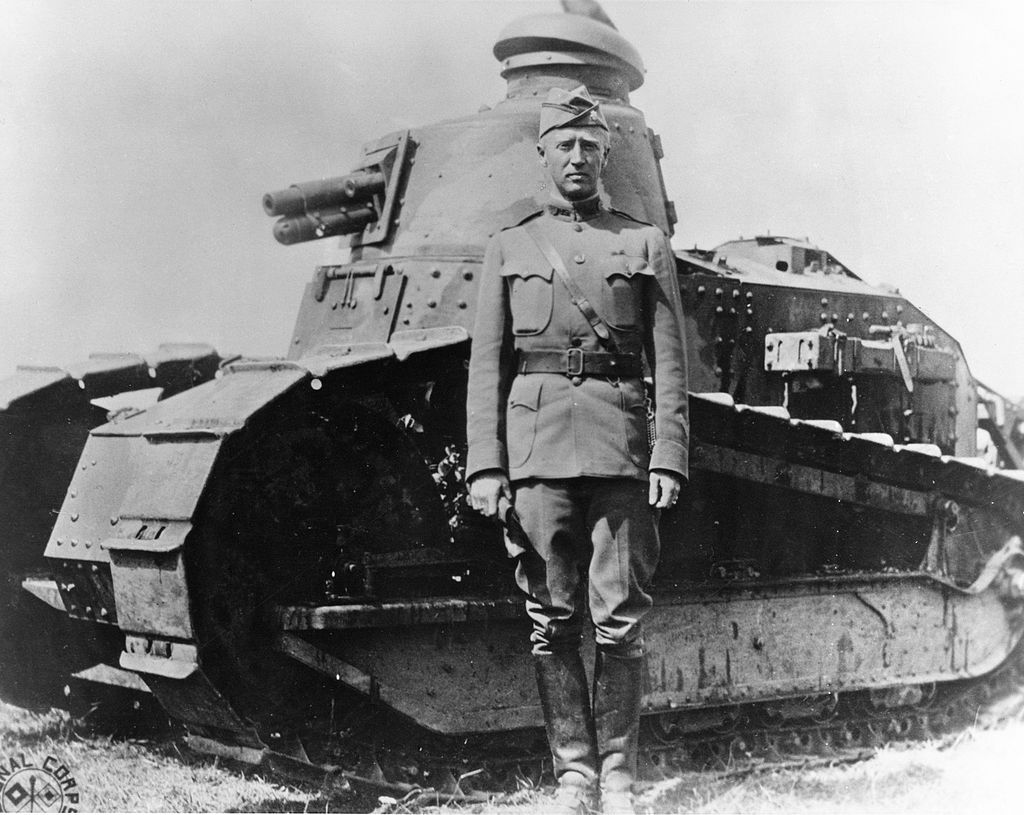 Captain George S. Patton stands in front of an FT-17, the original inspiration for the M1917. 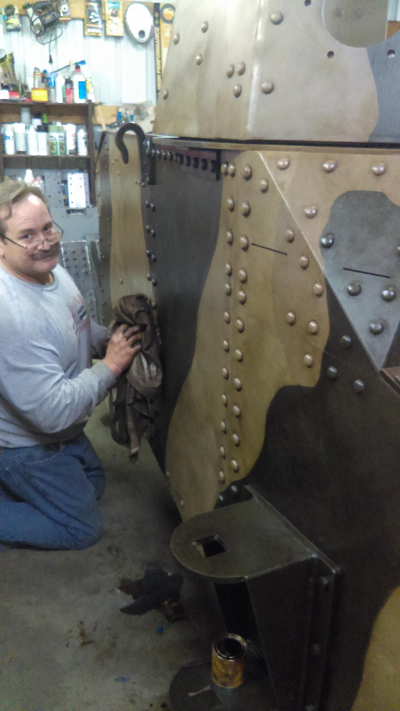 The tank is being painted to be completely historically accurate, including Patton’s famous Ace of Spades insignia. Judge Jim Osborne, Mr. Randall Becht, and Mr. Brian Bartholome have worked diligently since mid-2015 to reproduce an incredibly rare piece of history: a working, newly minted, 1:1 scale M1917 Light Tank. An American copy of the popular French FT-17, these two-man tanks marked America’s first attempt at mechanized warfare, even if the M1917 was never actually used in combat. While nowhere near as efficient as modern tanks like the M1 Abrams, without the M1917, contemporary American mechanized warfare would not have been possible without the lessons learned from the M1917. Most of these tanks were scrapped after the end of World War I, so this reproduction will be one of the few known functional M1917 Light Tanks in the world.

While World War I tanks as a whole are uncommon today, seeing an M1917 is like seeing a unicorn. Based closely on the French FT-17 light tank, M1917s were planned to be the primary armored units of the American Expeditionary Force. After the entry of the United States into World War I in April of 1917, American industry had to practically build a new kind of army from scratch. Since tanks were such a new invention, American forces turned to their new allies for help. Working off of French designs, American factories planned to complete four thousand four hundred tanks for the American Expeditionary Force. However, racked with coordination issues and logistical challenges, only nine hundred and fifty M1917s were completed by the end of hostilities in November 1918. The first M1917 tanks would not reach France until November 20th, 1918, a full nine days after the guns fell silent along the Western Front. As a result, no M1917 ever saw combat during World War I. The American tanks that did see combat as part of the US Light Tank Brigade were FT-17s obtained from French forces. Most M1917s were either scrapped or placed in storage. Today, only twelve of these machines are in the United States, and two more are currently in Canada. 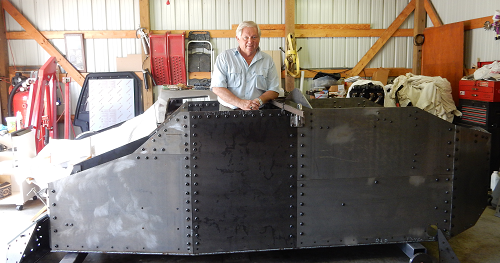 Judge Jim Osborne stands in the body of the M1917 in its early stages. Based on the statistics associated with the tank, the M1917 would have been a huge asset to the American Expeditionary Force. Weighing in at about six tons and armed with 37mm M1916 gun (or at times a Marlin M1917 machine gun), these tanks could travel at about five miles per hour and had a range of about thirty miles. While this may not sound particularly impressive by contemporary standards, this is awe-inspiring for the era that it was introduced in. The heavier British Mark I tank, for example, could only travel at about three and a half miles per hour, and had a range of just over twenty-three miles.

Judge Osborne is the chairman of the Indiana Military Museum in Vincennes, Indiana. With a fantastic collection of artifacts ranging from an F-4 Phantom Fighter Jet to uniforms from World War II, this replicated M1917 will be an amazing addition to the museum’s World War I collection. Working in cooperation with Randall Becht and Brian Bartholome of Hoosier Restoration in Haubstadt, Indiana, work on this incredible machine has been going forward with painstaking attention to detail, right down to the historically accurate number of rivets. Becht and Bartholome even consulted with several other museums to make sure that their efforts were completely true to history. The tank will also feature several authentic parts as well, to the point the term restoration may be more appropriate than reproduction. While there have been considerable challenges along the road, Osborne estimates that the main body is near completion, while the treads and engine are still in development. The tank will also bear the famous Ace of Spades insignia of General George Patton, who got his start commanding armored units during World War I. The tank will also be dedicated to him upon completion. In fact, George Patton Waters, grandson of General Patton and a member of the Museum’s board of directors, will be present at the dedication ceremony, which will be held sometime in 2017. 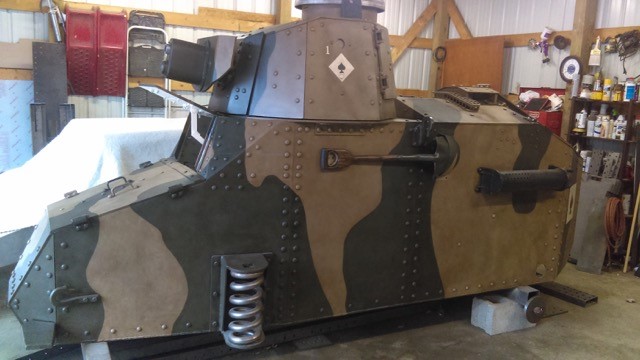 Of the 64 treads in a M1917, ten of them are original treads from an M1917. The next step for the restoration team will be to recreate the remaining treads. However, this restoration project will make sure that this tank, once planned to be the fast-attacking terror of the Western Front, is not lost to time. “We want to pay respect to the men and women who have bravely fought for this country and died to make it free. So we put our heart and soul into what we do,” stated Randall Becht. “Both [Randall’s and Bartholome’s] grandfathers fought in war as well as uncles and Brian's brother. So we feel the need to do this as a way to payback the debt which was purchased at such a high price.” One hundred years after these war machines first rolled off of the assembly line, it is important to make sure that the history of this tank remains alive, for its legacy has a louder roar than any engine. Thanks to the tireless work of three men with a passion for history, this piece of history will be alive for future generations to see and learn from.

While building a tank from scratch is nowhere near a science, the tank is planned to be completed by April 2017, just in time for America’s Centennial period of World War I to begin. To see this fantastic piece of history in action, visitors can visit the Indiana Military Museum in Vincennes, Indiana. To learn more about the museum and its exhibits, please visit the museum’s website at www.indianamilitarymuseum.org.

Also, for anyone wishing to reproduce a piece of living history of their own, Randall Becht and Brian Bartholome of Hoosier Restoration will be happy to help.

Adam Bieniek was a 2016 Summer Intern at the World War One Centennial Commission.