The Library of Congress—which holds the largest multi-format collection of materials on the American experience in World War I—will present a major exhibition in 2017 to commemorate the centennial of The Great War. 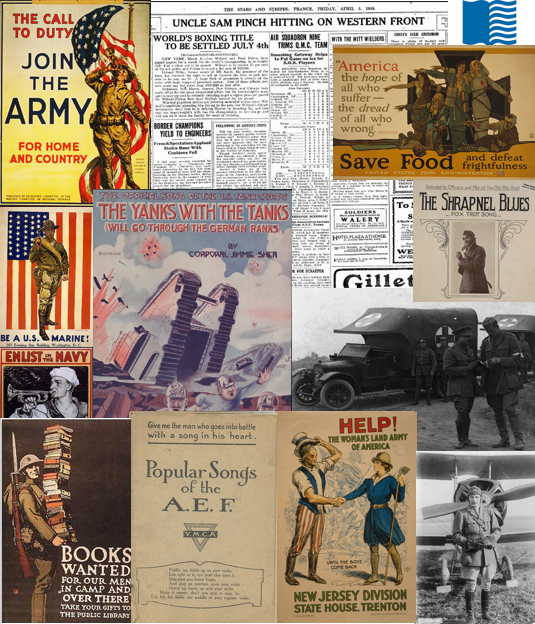 The United States’ involvement in the “war to end all wars” began on April 6, 1917, when the U.S. Congress formally declared war on the German Empire, and concluded Nov. 11, 1918, with the armistice agreement. The exhibition will examine the upheaval of world war, as Americans experienced it—domestically and overseas.

In the Library’s Thomas Jefferson Building, the exhibition will open in early April 2017 and close in January 2019. Initially, it will feature 200 items, but during its 18-month run, numerous other artifacts will be rotated into the display.

World War I, at the time, was the greatest conflict the world had ever known. It created seismic changes in American society and reshaped the global community in profound ways.

In the United States, a national army was conscripted for the first time; more than a million women entered the workforce, contributing to the war effort in countless ways; and African-Americans challenged racial inequality. The first widespread use of airplanes, tanks and poisonous gas revolutionized warfare and technologies; the wristwatch was popularized by the demands of modern battle; and jazz spread around the world with the American soldiers going abroad.

The collections of the Veterans History Project will be interwoven throughout the exhibition to give voice to the wartime experiences of those who served.

The exhibition will be organized into four sections:

“Prologue” will feature debates about whether Americans should enter the war or remain neutral and examine early efforts at international aid by the United States.

“Over Here” will explore mobilization for war by the U.S. government and citizens, including enlistment, training, victory gardens, Liberty Bond drives, censorship and the significant contributions of women and African-Americans to the war effort.

“Over There” will highlight the overseas experiences of American soldiers and medical volunteers as they experienced industrialized warfare with its new deadly technologies.

“Epilogue” will touch on the war’s effects, as national borders were redrawn, returning soldiers tried to reintegrate into America, and jazz spread across Europe. It will examine the challenges to racial inequality domestically and internationally, and it will look at new global forces the war helped to unleash, including the Russian Revolution and a worldwide epidemic of influenza.

Now through April 2017, the Library of Congress is featuring twice-monthly blogs about World War I, written by Library curators who highlight stories and collection materials they think are most revealing about the war. The blogs can be viewed at www.loc.gov/blogs/.

An exhibition showing how American artists galvanized public interest in World War I is currently on display at the Library of Congress. “World War I: American Artists View the Great War” is on view through May 6, 2017 in the Graphic Arts Galleries on the ground floor of the Library’s Thomas Jefferson Building, 10 First St. S.E., Washington, D.C. The exhibition is free and open to the public Monday through Saturday, 8:30 a.m. to 4:30 p.m. An online version can be viewed at www.loc.gov/exhibits/american-artists-view-the-great-war/.

With the most comprehensive collection of multi-format World War I holdings in the nation, the Library is a unique resource for primary-source materials, education plans, public programs and on-site visitor experiences about The Great War, including exhibits, symposia and book talks.